With feminism and what it means so firmly back on the public agenda, there’s never been a better time to get to grips with its role in art and culture.

There are no two ways about it: I feel out of my depth.

I’m standing in a blessedly cool corridor on a 35-degree day, about to meet with Professor Anne Marsh, Professorial Research Fellow at the Victorian College of the Arts. In the thick of organising a massive, three-month program of artist residencies, performances, artists’ talks, screenings, and cross-generational mentoring programs, she has somehow found some time to talk with me about art, history, feminism, and her upcoming symposium Women* Art and Feminism in Australia since 1970.

Though I’d call myself a feminist in a heartbeat, aside from irregular contributions to a feminist haiku Facebook page, my interaction with and knowledge of feminist issues come up woefully short. About art I know even less.

Marsh’s office, on the University of Melbourne’s Southbank campus, is small but inviting. Art journals and books line the shelves, multi-coloured Post-Its adorn the walls. There are two comfy, low-slung, mid-century-ish chairs in the centre of the room.

Marsh has had a long-standing interest in feminism, as an installation and performance artist in the 1970s, and throughout her academic career since. She has been published in books, art journals, and magazines; she has written numerous exhibition catalogue essays; and she has given keynote addresses at conferences worldwide.

She’s also warm and open, and if ever there were a time to bring my knowledge of feminism and art and Australia up to speed, this is it. I ask for a potted history. 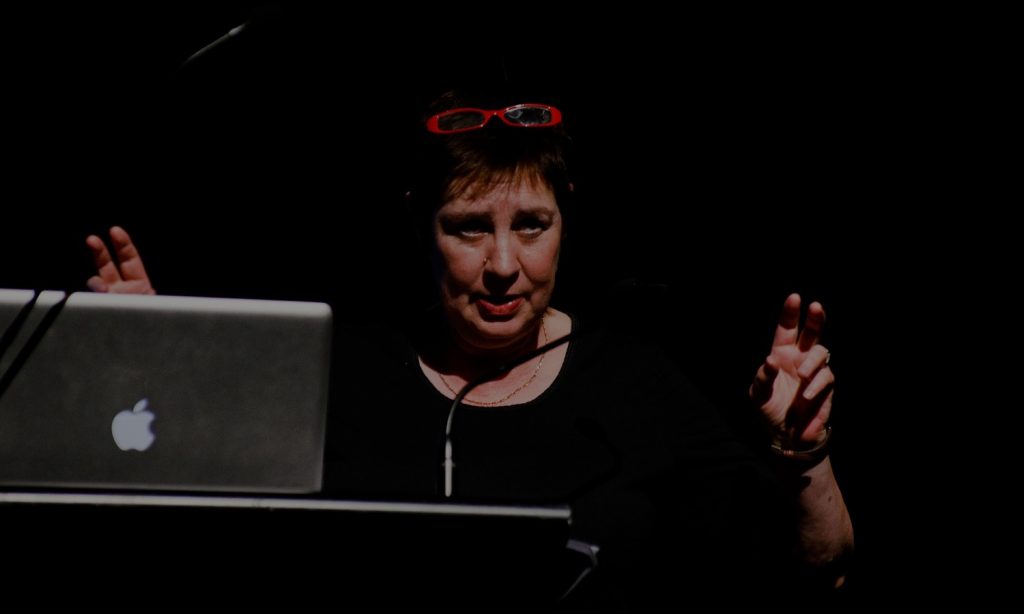 But it’s a big ask, and really not that straightforward. “Well, it starts with suffrage, back in the late 1800s – you know, women getting the vote …” She trails off. I sense Marsh is organising her thoughts – and there must be a lot of them, given she’s currently in the midst of an Australian Research Council-funded project on the last four decades of feminism and art in Australia.

“Well, historians talk about waves of feminism, but I don’t think it’s a simple as that: things don’t just go in waves and then stop, and then another wave comes. In the 70s feminist art movement, to take just one so-called ‘wave’, there was a serious campaign to re-evaluate women’s craftwork, which had traditionally been at the bottom of the fine arts hierarchy, and argue for equal representation for women artists in exhibitions. In that same period, women’s studies emerged as a discipline at universities and this gave rise to a period of intense theoretical discussion during the 1980s and 90s about feminism, the female body, the differences between the sexes and the representation of the female form.”

“But, maybe because of that, by the late 1990s there weren’t as many feminists marching on the streets against rape and against war, because they were in the academies typing out their next paper and working on their next doctorate. But the theory decades certainly sharpened our minds.”

In terms of art, Marsh mentions something that seems sadly obvious: that female artists are still – in 2018 – under-represented in national survey exhibitions and international biennales, which are often top-heavy with male artists. I ask why that might be.

“It’s still often the case that women are the major carers inside a family structure,” she says. “So you might have a male and a female artist living together and having children, but it still goes to the woman to care for the children in many cases. I think that some men are realising the importance of more active co-parenting now, but that generational change has been very small.”

Marsh has been channelling all her energies into Doing Feminism / Sharing the World for the past three months. There have been feminist bike rides, picnics in the park, craft-ins, and even a temporary artists’ radio station out of the Victorian College of the Arts’ Norma Redpath Studio. (Marsh laughs when she talks about the radio station, mimes walking around with a transmitter desperately searching for a signal.) 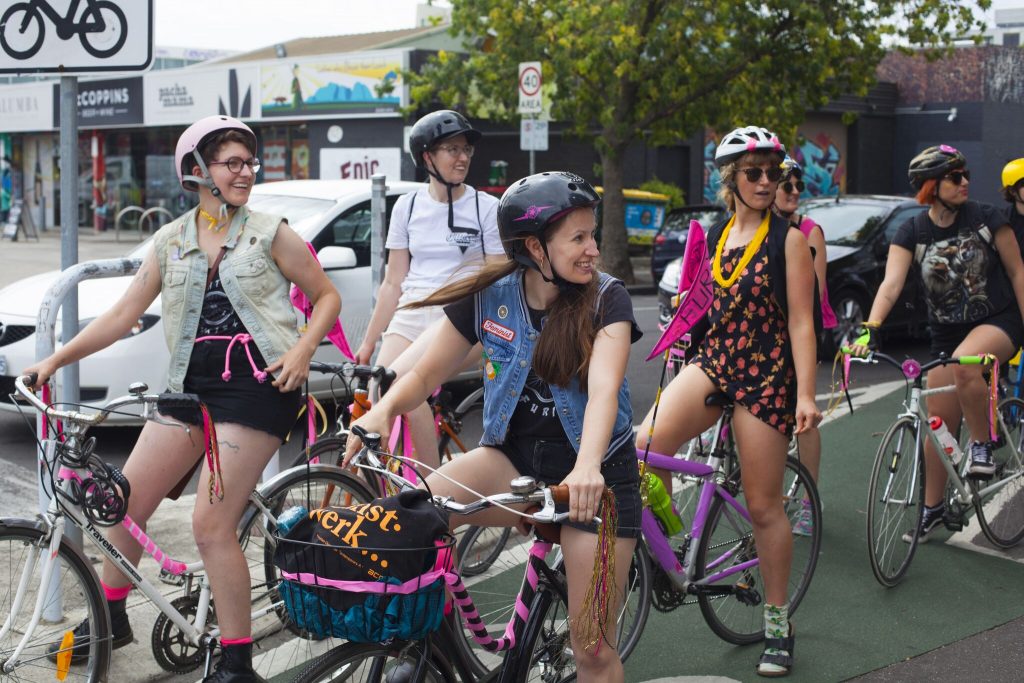 “There are women in their 20s and 30s, in particular, looking back now over a 50-year period of contemporary art and feminism, saying, ‘Well, we kind of quite liked the activism back then and we’re going to get back hold of those crafts’,” she says. “And now there’s a whole movement towards activist and participatory craft, and at its apex are the Knitting Nanas who are ‘craftivists’ campaigning against coal seam gas in New South Wales. So that’s kind of why I ran this program, because art and feminism are cyclical; they spiral in and out of time, and it’s interesting to see these younger women, very schooled in theoretical frameworks, turning back to an earlier time, and asking, ‘Why aren’t we doing that anymore?’”

Doing Feminism will culminate in a three-day symposium, Women* Art and Feminism in Australia since 1970 from 21–23 February at the VCA. The program is daunting, covering everything from cyberfeminism to race, art, and disability. The speakers are visual anthropologists, desert weavers, medical practitioners, and university professors. There are panels on the female body, on activism, immigration, and displacement. There are performances. When Marsh reels off everything that will be happening, it seems impossible that it will all fit within three days.

Having gained a little confidence over the past hour that perhaps I knew more about feminism than I thought, I suddenly feel at sea again. Will the symposium be, um, accessible to people who perhaps don’t know that much about art and feminism?

Marsh laughs. “Absolutely! I’ve been in academia far too long to really enjoy conferences, which is why when I called for submissions I asked for papers, manifestos, conversations, artist presentations, and performances. I really wasn’t interested in sitting in a room endlessly reading academic papers. So there are four people on most of the panels, and at least half of them are artists who are doing crazy things.” 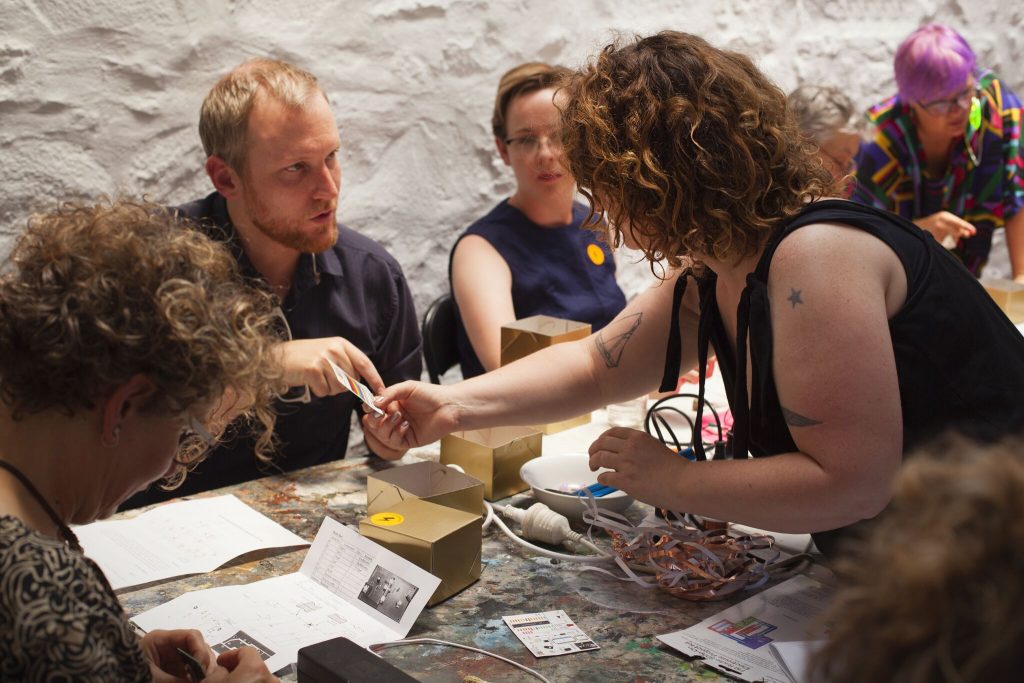 I’m hesitant to ask the next question, a little afraid of what I might hear – because for all the small gains being made, for all the retweeted tweets and trending #MeToo-style hashtags over the past six months, it seems (to me, at least) that there is still a dispiritingly long way to go. But I dive in. Do you think we’re on the brink of a new age in feminism?

Marsh pauses a moment, laces her hands together, leans forward.

“I think the way the #MeToo campaign has gone viral is fantastic. Every woman has experienced sexism in the workplace, in the family, or in their chosen faith and I know that there’s a spectrum, but I challenge any women to say it’s never happened to her.”

She pauses again, weighs her words.

“I think if we’re on the brink of anything, I’d like it to be the idea that feminism is an ethical way of being that men need to take up. And, you know, they don’t even have to call it feminism if they don’t want to. They just need to call out their mate who’s yelling at a woman in the street. They need to stop saying to their colleagues, ‘We’re not hiring her because she’s a difficult woman’. I think men need to take responsibility for men. And I think when we see that happening, then we’re on the verge of something new.”

I glance at the clock on my phone. Our time is up, and Marsh, ever busy, is heading up to the VCA’s Norma Redpath Studio for the evening’s Doing Feminism event. She presses a copy of her latest published article in my hands and says she hopes to see me at one of the symposium events. I’m looking forward to it – maybe I’ll even write a haiku.

Women* Art and Feminism in Australia since 1970 runs from Wednesday 21 February – Friday 23 February at the Victorian College of the Arts. Book tickets via Eventbrite.