Digital archives of sung poems might seem a long way away from dance movement therapy, but for Dunphy it’s all part of a broader engagement with art, culture and community-building.

Even as a 14-year-old girl, Dr Kim Dunphy, a Lecturer in Dance Movement Therapy at the University of Melbourne, knew she wanted to be a dance movement therapist – not that such professionals were known in Australia at the time.

“I think I read about dance movement therapy in a magazine and always knew that’s where I was headed,” she says, trying to remember. “I was always more interested in using dance as a way for advancing ordinary people’s lives, rather than being a performer myself or training other young people to dance.”

We’re talking in a quiet interview room within the Faculty of Fine Arts and Music’s Creative Arts and Music Therapy Research Unit (CAMTRU), established in 2016, where Dr Dunphy is an award-winning researcher, lecturer and key developer of curriculum.

In fact, Dr Dunphy is the first person in an Australian university ever employed to undertake dance movement therapy research, having just completed a three-year Mackenzie Post-Doctoral Fellowship. This opportunity made her one of very few dedicated dance movement therapy researchers, perhaps ten, in the world. In 2020, she will be teaching into the University’s new Master of Creative Arts Therapy.

“It’s a marvellous time to be here at the University of Melbourne and be part of this movement forward," she says, “because we need to have research and develop evidence in order to advance as a profession”.

As for why dance and movement are innately therapeutic, Dunphy is convincing when she talks of its holistic potential to address not just physical issues, but creative, cognitive, social and emotional ones as well. She gives many specific examples, including patients with Parkinson’s learning to dance with partners and thus improving balance and coordination; or dementia sufferers unable to verbally express themselves but being able to remember movements or gestures from childhood.

First identified formally as a profession in the US in the 1940s, dance movement therapy in Australian academia is very new. But Dunphy is quick to add a qualifier: “Indigenous Australians would have been practising dance as a form of therapy for 60 or 70,000 years, using it as a regular part of culture also for celebrations, rituals and transitions like marriages and deaths.”

Indeed, some of Dunphy’s previous research has focused on dance and Indigenous wellbeing, and she says she hopes to see more therapists working with Indigenous communities, “where dance is likely to be far more culturally appropriate than talking therapies or some other kinds of health services”.

Dunphy has always been interested in how other cultures express themselves, and not just through their traditional dances. This is what led her to Timor-Leste (formerly known as East Timor) where she studied the role of the arts in bringing about social change as part of a PhD, completed in 2014. During this research, one of Dunphy's interviewees challenged her, saying: “You’ll go back and get a university job with your research, but how will the people here be helped?”

Dunphy’s answer was to band together with some other likeminded people to start up an NGO called Many Hands International. The major project of Many Hands was the funding, building and running Timor’s first community cultural centre, Centro Cultura Lautem, based in Lospalos near the remote far eastern tip of the island. This was undertaken in an ongoing partnership with the Culture Department of Timor's national government.

“Fataluku” is the name given to both the people and the language here. Subsistence agriculture is the primary way of life, with literacy low, electricity iffy and the internet sporadic, mainly accessed by dongle or phone.

The cultural centre, launched in 2013, has a performing arts space, art studio, workshop and offices, with plans underway for further development. It is funded through grants and donations, with a strong emphasis on training local people to operate independently one day. A primary focus is a website developed to record and promote Fataluku culture, which features photos, videos and written information about local cultural practices, such as the building and playing of a bamboo flute by the one elderly man who still knows how. 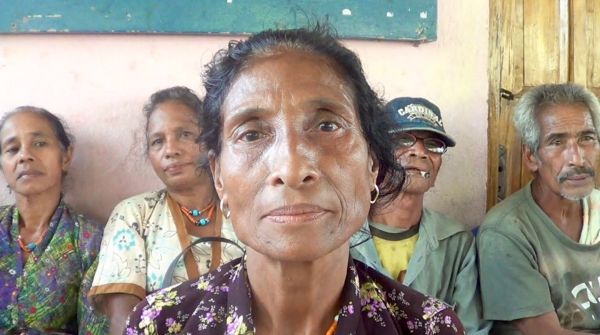 In exciting news, Dunphy has just been successful in securing a $20,000 grant from the University of California Los Angeles (UCLA) to digitise a collection of endangered sung-poems of key significance to the Fataluku people. These poems, around 100 of them, are known as “vaihoho”, and are currently recorded only in fragile hand-written exercise books by the late Justino Valentim, a Timorese resistance hero who worked with Dunphy and the cultural centre before his death in 2014.

“Justino was known as a leader of his people against the Indonesians,” she says. “He took guerrilla soldiers up into the mountains and then he and his wife agreed to have a large family so they’d have their own kind of army.

“But he was also a cultural leader, so after Independence in 2002 he wanted to share, preserve and promote his culture. Websites were mainly outside of his experience, but we feel that this project, in consultation with his family, will really honour his wishes.”

The UCLA grant will allow for the digitisation onsite in Lospalos of the poems – which cover everything from love stories to creation myths, moralistic fables and folktales. These will then live on the website of the cultural centre, as well as in the UCLA archives.

While websites and digital archives might seem premature for a people lacking in reliable internet, Dunphy says: “It’s coming fast. It was only ten years ago when electricity came for six hours a day, every second day. Now, there’s a high rate of mobile-phone ownership.”

There’s the also the interesting discovery, she says, that the site is being accessed by many homesick young Timorese people living in Europe, where they’ve gone to escape a 40% youth unemployment rate.

Digital archives of sung poems seem a long way away from dance movement therapy, but for Dunphy it’s all part of a broader engagement with art, culture and community-building. “One of the great privileges of being an academic is that you have the freedom to explore your research interests as long as you’re doing it with integrity, producing research and getting grants,” she says with a smile.

There’s also the fact of giving back: “We are a rich institution in a rich country and it’s our moral obligation to make a contribution, not just to Australian communities but also to our neighbours where we can.”