Meet the family: Ron and Margaret Dobell on why they love VCA Music Theatre

Their support of VCA Music Theatre has transformed the lives and careers of emerging artists, but the Dobells’ influence goes way beyond the financial.

Ron and Margaret Dobell look at each other. What do they, as decade-long supporters of VCA Music Theatre, get in return for their philanthropy?

“A lot of students have told us they feel safe when we’re in the audience,” says Ron.

“You couldn’t get a better compliment than that,” says Ron.

I’m interviewing the pair on the back of recent news that, through the Ron and Margaret Dobell Foundation, they’ve funded two new initiatives: the Dobell Foundation Cabaret Scholarship, in which a selected VCA graduate, in his or her first year after study, undergoes an internship of sorts with internationally-acclaimed cabaret creators Finucane & Smith; and a Melbourne Fringe Show Support Grant, which offers development funds and production assistance to a VCA Music Theatre graduate performing or producing a show at the Fringe. 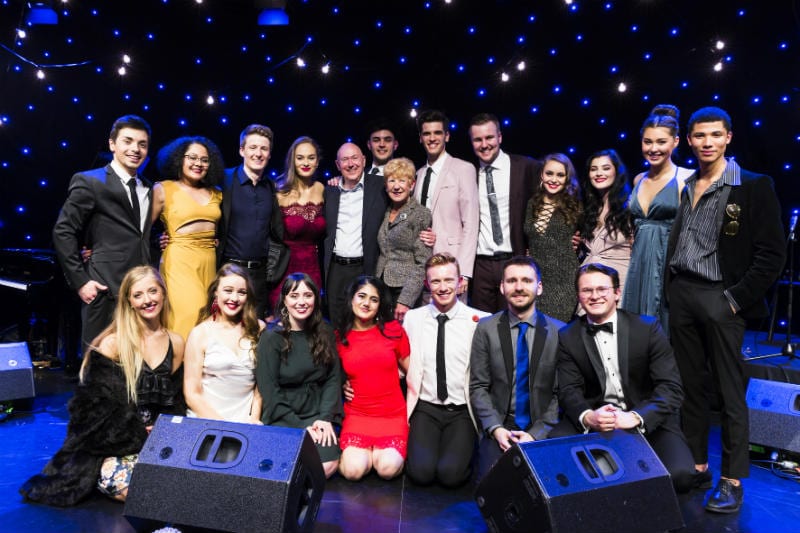 “We’d been supporting the Fringe Festival anyway, in a kind of ad hoc way,” says Ron. “Marg suggested a more formal agreement – the catch being that we wanted to attach it to the VCA.”

Margaret nods, says, “We thought we might get lucky and have one of the grads submitting a show to the Fringe this year … but we ended up with five, and didn’t want to choose.”

The inaugural recipient – Jayde Kirchert, with Ascent – was duly selected by a specially-assembled independent Fringe panel and will feature at next month’s Festival.

The relationship with Finucane & Smith grew out of the Dobells’ ongoing support of the Melbourne Cabaret Festival – which Ron chairs – and the realisation that many Music Theatre grads, at some point or another, will find themselves performing cabaret.

“Finucane & Smith are at the real cutting edge,” says Ron. “They’re not just sitting at a piano singing torch songs. We said to them, ‘What if we give you some funding, but on the back of that you take a recent VCA Music Theatre graduate and spend a period of time with them, immersing them in how you create work, how you fundraise, how you market the work?’ Very generously, they agreed to support the concept.”

As a result, the inaugural recipient – Willow Sizer – will join Finucane & Smith in Melbourne and regional Victoria for upcoming performances of their show Dance Hall. 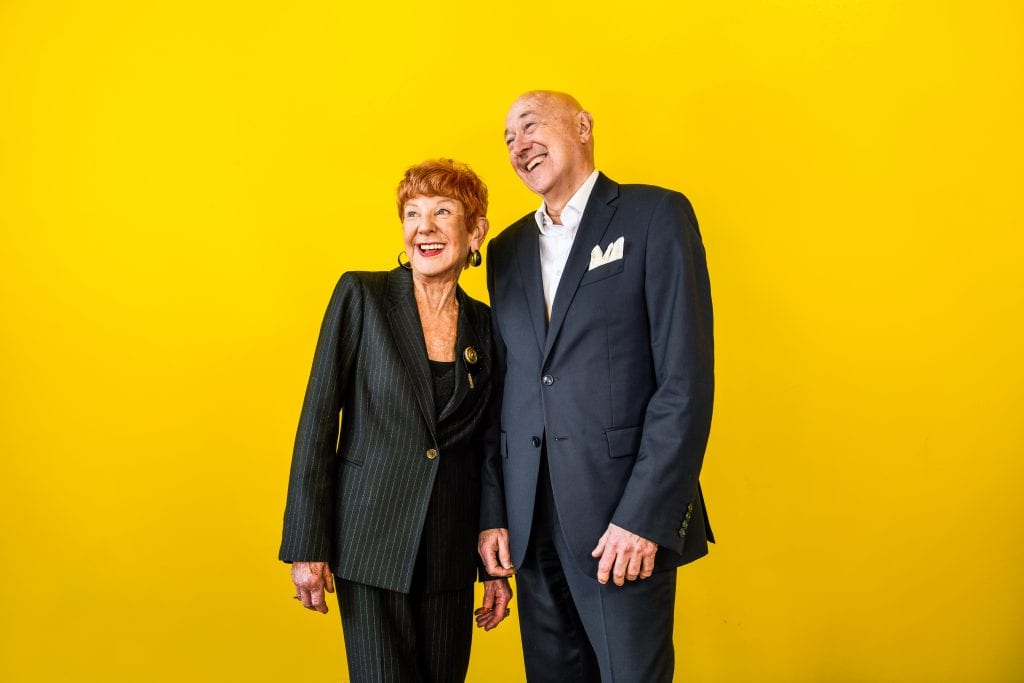 That approach – looking for ways to help, coming up with practical solutions – is a Dobell speciality. For a decade, through the Ron and Margaret Dobell Foundation Award, they’ve supported an annual prize to graduating VCA Music Theatre students, the cash component of which – $25,000 – is the richest prize for a music theatre performer in Australia.

But, as head of VCA Music Theatre Margot Fenley has put it: “their financial support is only one element of their relationship with the VCA”.

“I guess, ten years ago, we thought we’d probably stay pretty close to whoever won the Award to for the rest of his or her career,” says Ron. “But because we were taking such a keen interest in what everyone was doing, we became quite close to the entire class that first year.”

“And then the year after that,” says Margaret.

“And then the one after that,” says Ron.

“We now have this huge family,” says Margaret, “all of whom we’re totally devoted to. We used to try to go to everything they were in after graduating, and we still try to do that, but it’s getting difficult because there are so many of them. Every now and then we’ll have a reunion, but half of them are working overseas or interstate or whatever, which is wonderful.”

Ron nods, smiles, says, “Margot invites us along on day one, so we meet the students the first day they’re on campus.”

“We throw a party at the Arts Centre at the beginning of every year for the first and second years,” says Margaret. “And we give a graduation dinner to the third-years after they finish their showcase performances. That’s become a nice tradition.”

“If there’s a visiting overseas artist that comes to the Arts Centre, we’ll take the class along and make a big night of it,” says Ron. “And they usually get to meet the artist afterwards, which is great – they love that.” 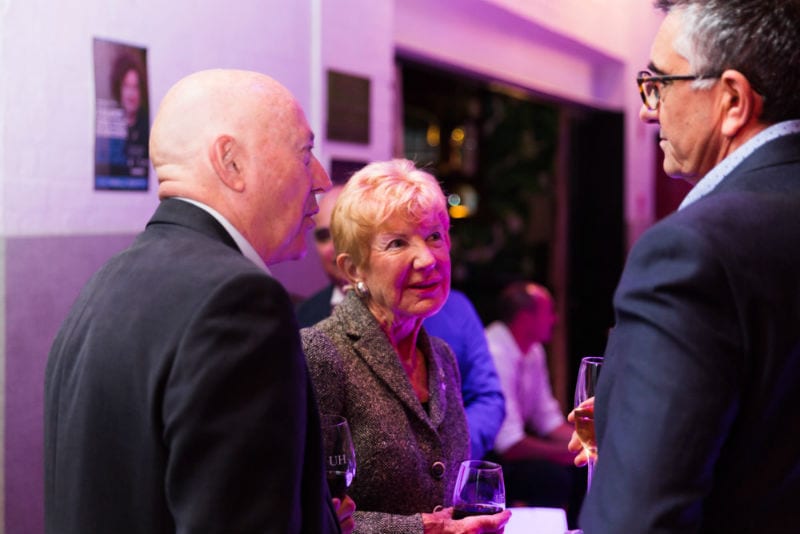 “We never wanted to just write out cheques,” says Margaret. “I mean, that’s great, and thank goodness there are people who do that. But we always wanted to go beyond that and have a greater involvement with what we contributed to.”

“I don’t like to call it philanthropy,” says Ron. “We’re friends in a position to be able to help them achieve their goals and to give them unconditional love and support.”

In addition to its support of the VCA, the Cabaret Festival and Arts Centre Melbourne, the Dobell Foundation sponsors an annual Green Room Award in the Music Theatre category for Best Male and Female Artist in a Featured Role. This year, Ron and Margaret were honoured with their own Green Room Award for Outstanding Contribution to Cabaret, which took them something by surprise.

“They phoned us to say, ‘You haven’t accepted your tickets for the ceremony’,” says Ron, laughing. “When I told them we were in New York there was this stunned silence, and then they said, ‘Oh no’…”

“That was awkward,” says Margaret.

“The Cabaret Festival organisers arranged for the trophy be presented to us at the Festival instead,” says Ron. “The whole thing came out of the blue.”

What was their motivation for starting a Foundation?

“Basically, I’ve had a good corporate life and done well out of it,” says Ron. “Margaret and I sat down and said, ‘Look, we’ve got enough, and there’s a little bit of surplus there. What will we do with it?’ We had no idea what we were doing when we started, but we wanted to make a difference.”

“Neither of us have any performance background,” says Margaret. “But we’ve always gone to shows and love music … We love jazz, classical, cabaret, and obviously music theatre.”

Ron is quick to point out that – in scale and set-up – they’re not the Myer Foundation, which also provides generous support to the Faculty of Fine Arts and Music.

“People can’t apply to us directly for funding,” he says. “Our Foundation specifically deals with what the government calls Deductible Gift Recipients, which is the status of the University of Melbourne, the Arts Centre, and most of the theatre companies. It doesn’t take up much of our formal time because we don’t seek money from anywhere else. But we spend a lot of time assessing and looking for new opportunities to assist and to keep up to date with the VCA and its graduates.”

“If a graduate, say, puts a show together and needs a kick-start, a bit of money to help them on the way, we’ll often give that money outside the Foundation,” says Margaret.

They smile at each other, at me, I smile back. I’m not even sure why they’re so chipper but, god, it’s infectious. They fit easily in the top-five happiest couples I’ve ever met.

What brings them most joy in seeing the VCA students perform? 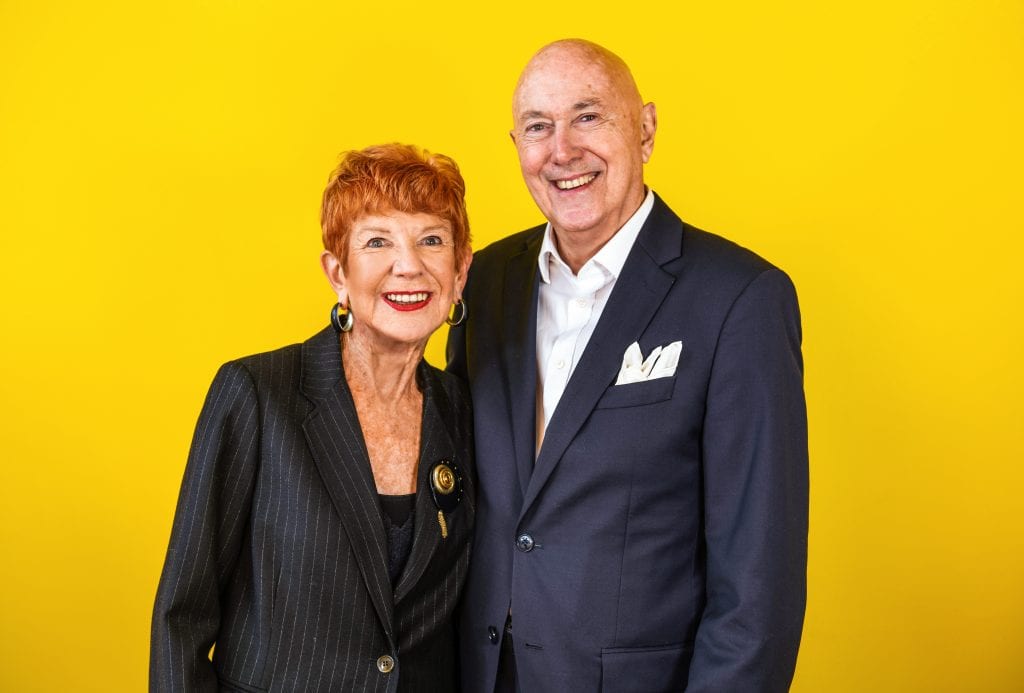 “I think, seeing them perform as a whole class,” says Ron. I really enjoy seeing them do their main performances as an ensemble, and working together as a team, if you like. I get real a thrill out of that.

Margaret is still thinking. “I don’t think there’s one single thing that I could pick,” she says eventually. “It’s just seeing their dreams come true. That sounds cliched, doesn’t it? I guess we’re … surrogate grandparents. I prefer parents, but then we’ve met students’ parents who are young enough to be our offspring.”

“I prefer not to use the parental analogy,” says Ron.

“We don’t know anything about their personal lives, and don’t want to,” says Margaret. “It’s just nice to feel like an integral part of what’s happening, even though we know we’re not. We’ve had nothing to do with any of the fabulous things that have happened at the VCA – but being able to help when it was needed in various ways … that’s been really good.”

“We feel really integrated into the Music Theatre course,” says Ron, “even though we’re not academics or performers. We come in to see them perform and complete their assessments, and we get entertained. We had no idea when we started off that the relationship was going to end up this way.”