Podcast: Professor Sally Smart, “The power of artists is extraordinary”

The Expert Hack Podcast sat down with Victorian College of the Arts alumna artist Professor Sally Smart to discuss how artists are influencing politics and social change.

ALI MOORE: From the University of Melbourne, this is Expert Hack, a show about the changing world of work and how industry experts are finding clever solutions to tricky problems. I’m Ali Moore.

Today, how artists are influencing areas like politics and social change. And what you can learn from artists about how to shape people’s opinions.

I’m speaking with artist Professor Sally Smart. I began by asking Sally about her current projects on display in Melbourne.

SALLY SMART: Actually, right now in the Margaret Lawrence gallery, you will find two bodies of work sitting in conversation with each other. One, the pedagogical puppet and two, the most recent work.

And the pedagogical puppet started a number of years ago when I was invited to the University of Connecticut to be an artist-in-residence at that time. I asked them to paint one of the walls of the gallery, which would be my studio, black like a blackboard. You know working within a university, I was to work around, you know, I thought about the pedagogical puppet. Who would be the puppet? Me or them. But that’s the framework that I was going to set up. The long and the short of that is that you will see, over five years, I have actually, in all these different places, I have built a sort of a whole representation around dance, movement, choreographers’ drawings. And they are all there in this blackboard.

ALI MOORE: And I guess that’s what’s amazing about this exhibition is that it’s so reflective of the work that you do more broadly. And I want to look at the cutting at a minute. But first of all, the idea of the blackboard. How confronting is that for an artist? Because what is inside your head you are allowing out and you are sharing with your audience. That’s not common.

SALLY SMART: No. And in fact, that’s exactly what I wanted to do. It was actually a very, very decisive decision at that time. I thought: I am going to reveal my process, my thinking, and be in that space. That comes across very strongly in this exhibition and how that has grown, how that thinking has changed, and what I’ve added to that.

And I also collaborate with a writer and cultural historian Maria Tumarkin, who’s at the University of Melbourne creative writing. And over that period of time and through our collaborations, I will add her text onto the board as well. So, you’ll see me writing notes. You’ll see fragments of other texts, but you’ll also see other people’s texts that have reflected on my work. 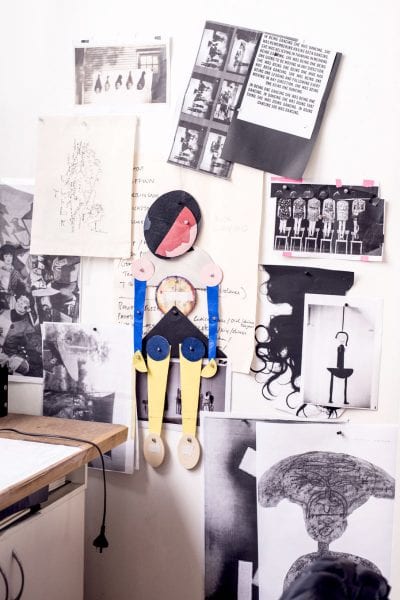 ALI MOORE: The focus on cutting. You call it the politics of cutting. How did you come to that?

SALLY SMART: It goes back quite a way actually. To maybe 1991. And I was interested to look at issues of identity, and of course feminist politics, and also the unstable nature of identity. How do we view identity, you know, personally and politically, publicly? I remember very strongly. I was sort of wanting to make ideas if you like, assemblages of identity. And because I wanted to position it within women, I sort of had these cut-out elements around clothing, actually. Which is quite interesting, when you think about what’s happened in more recent times, but in terms of my work.

ALI MOORE: So, it was assembling and disassembling.

SALLY SMART: Absolutely. So, it was the fact that you could see that it could be disassembled that was really important conceptually, at that time. As I said, I started to look at the metaphors of cutting. Cutting the body, scarification. So, and cutting inside an anatomy, and also then I started to look at the psychological aspect of cutting. And the issues around self-harm. And this reference to the psychological through delicate cutting, scarification, self-harm. But often that is also about revealing the marks. And that’s also been quite interesting, I think, philosophically for me through this whole process. I’ve always liked to show the marks of cutting in my collage as well. It’s a bit like wanting to reveal rather than conceal something.

ALI MOORE: So, the question then becomes I guess: The skills to become an artist like yourself and to be able to think, and then from that thinking create – are they skills that you can teach?

But there are some things that can be taught and there are definitely things about engagement in the world and giving a licence in a way, I often think, to investigate, to be curious. That you can make art out of the most obvious and most simplest things, or the most complex. And I think that you can teach that. I think you can, and I think you can be. Obviously, you can teach criticality, you can teach about being in those spaces of thinking, in those spaces of pedagogy. You can think about it, and also present new models to people and I think that those things can be taught.

ALI MOORE: And there’s a role for universities in that?

SALLY SMART: Totally. Absolutely. I wouldn’t be the artist today if I hadn’t gone to the VCA. And then my Masters at the University of Melbourne. Without a doubt, it was the people that I came in contact with, the pathways that I found through research. I was open to that, but I think if anyone, I think most people who are wanting to be engaged, are open. So, I found incredible pathways, yeah.

ALI MOORE: It is truly extraordinary. I mean, you also made the point very early in this conversation, that it was interesting that you started with fashion, given what’s happened recently in your career. And I guess what you’re referring to there is the fact that a number of your pieces have been picked up by the luxury Italian fashion house Marni, who have taken some of your images for their clothing and accessories. What is it like to see your work on handbag, albeit be a very expensive handbag?

SALLY SMART: (LAUGHS) yes, it’s quite extraordinary actually. It’s been, yes, it’s been an amazing collaboration. They have chosen four images for both men’s and women’s ranges. Quite a number of garments actually and bags. And – but one of the things I gave them the rights to do was cut them up. Of course, I did!

ALI MOORE: (LAUGHS) From one cutter to another.

SALLY SMART: And they were very grateful for that. But they had been looking at my work for some time. But they did a really beautiful interpretation. It wasn’t just putting the clothes, the images on the clothes. There was definitely also an interpretation of my work within a particular range. So, I thought that was really wonderful.

And that is happening increasingly around the world, where great fashion houses like Marni are looking to visual artists and looking at their output of work. I mean there’s always been a relationship, I mean it was a very early relationship between Sonia Delaunay, you know, the great avant-garde woman artist who whose work I love a great deal. So, it’s always been there. It wasn’t really very difficult for me to say yes (LAUGHS).

ALI MOORE: But does it open – if not other doors, it must increase your exposure enormously.

SALLY SMART: Oh, totally, around the world now. I get images sent to me on Instagram for instance. There are just images constantly from Japan, in Turkey and India is just doing an article in India Vogue, I think. There are people sending me images themselves in changing rooms in my garments – you know, friends. (LAUGHS). There are people wearing my clothes all around the world. Absolutely. It’s extraordinary. 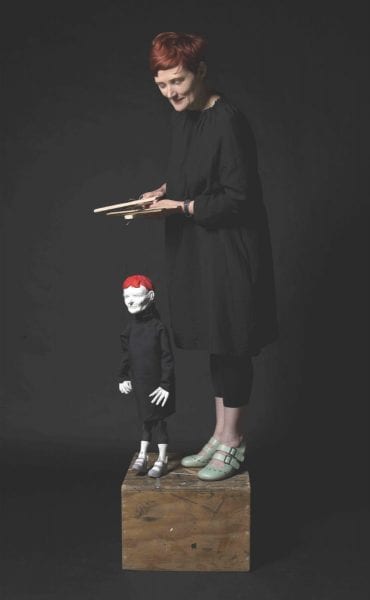 ALI MOORE: So when we look beyond your body of work and we look at artists more generally. I mean, what do you think about the power artists have to create a bigger picture? I guess not even just to provoke thought, but to do even more than that. Perhaps even change opinions?

SALLY SMART: The power of artists is extraordinary. It is politically very powerful. It can be very – or it can also be just quite subtle in its, I think, around identification with something. Or to feel like you might belong in terms of all sorts of issues. You think about the environment, or gender, or the politics with changing in a very active way, as activists as well.

I mean artists have been fundamental in so many ways around major change, with indigenous rights. And all of these things are extraordinary in their strength to, make manifest in the world? I mean an artist will put something out there in the world. You can’t always know how it’s going to be received. I mean you’ve got an idea maybe. But, it’s really up to interpretation as well. Sometimes it gets confused around an artist and making political art or political statements. And there are some artists that are very political in their outlook and their thinking and even in their activism.

ALI MOORE: So what they start with the thought, or the point before the artwork?

And I think that’s really, really important to make that distinction sometimes for artists. So, they don’t always have to be representing it literally. It can be about a life lived. You know it can be music and it can be in dance as well. But it’s powerful, it’s totally powerful. 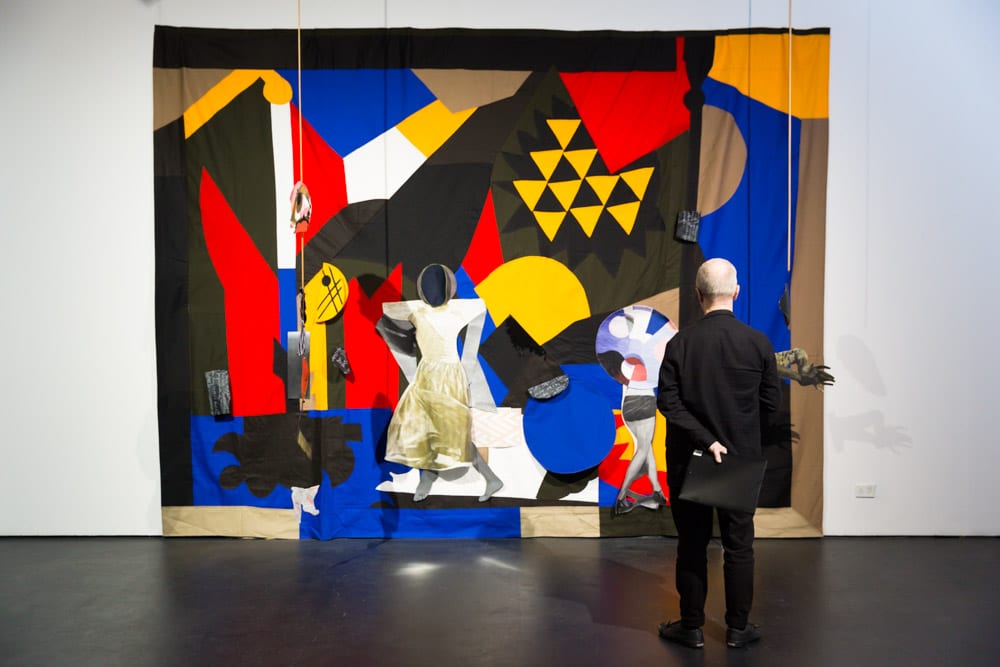 SALLY SMART: I think with a digital age, I think some of the new paradigms around work for artists, we’re just at the absolute beginning of. I think that there are increasingly young people being able to monetise their practice. And I really would stress that that may be with some sort of collaboration that they can do that. I think in a collaborative sense that would be great. Whether it’s with writers, producers, makers in different ways. I think there’s a pathway for that.

And they’re making their own work still in the most critical environment that I would want them to do it in. Not to dilute that in any way. But, I do also want them to be in the world globally.

SALLY SMART: Totally in the world. I want them to go forth into Asia. I want them absolutely to do that. We’re so there, so close. You know that’s fundamental. So, with all of those things. Yes.

ALI MOORE: If you enjoyed this conversation, take a look at Episode 7 in the series – why the best teachers actually learn from their students, and why you should be open to learning from even the most unexpected sources.

Expert Hack is a podcast from the University of Melbourne, where the Melbourne Model is preparing students for the world beyond their degree. Be sure to subscribe on Apple Podcasts, Google Podcasts or in your favourite podcast app.