The theatre of fake news: Polygraph speaks truth to a post-truth era

In a time characterised by fake news and political dishonesty, how are we to understand truth? Such is the subject of enquiry in Polygraph, part murder mystery, part love story and full boundary-pushing physical theatre that speaks truth to a “post-truth” era.

Theatre Works‘ latest show Polygraph brings together performance group OpticNerve and a number of Victorian College of the Arts actors and producers in an adaptation of Robert Lepage and Marie Brassard’s metaphysical thriller. Directed by renowned theatre-maker Tanya Gerstle, the play explores a world in which truth is on trial. Below are three different perspectives from three of the show’s contributors – Director Tanya Gerstle, Assistant Director Romi Kupfer (Master of Directing for Performance) and Designer Betty Auhl (Master of Design for Performance).

When I read a script, the first thing I want is for the narrative to hook me – does it align with my social and political concerns? As a feminist, I most often make work about women’s experiences, as well as social equity and human rights. I’ve made work about incest, domestic violence, witch burning, asylum seeking and refugees.

Polygraph is set in Quebec City three months before the Berlin Wall falls – we’re talking about the East/West paradigm, about walls that keep people apart. With Trump’s wall in Mexico, and walls in the Middle East between the Palestinians and the Israelis, I’ve been thinking about how little we have learned from the construction and dissolution of walls, politically. It seemed the right time to make this play.

Something else that attracted me to the script is related to this idea of “fake news”, and the discussion about truth and perception that comes with it. Around the time the play is set, the polygraph machine was a kind of symbol of definitive truth. But in reality, it was being used in police stations to force confessions.

I think theatre has a particular social value. It brings strangers together in the same place, to witness other’s efforts in real time, to experience something out of the ordinary – transcendent, if you like. It is a communal event – a ritual with its own rules that you could compare to watching a game of football – but it also provides us with a chance to play with reflections of our lived experience, like a really good dinner party conversation.

My goal with Polygraph is for the audience to be moved, intellectually stimulated and visually mesmerised. If we get those three levels of engagement, then I will be satisfied. 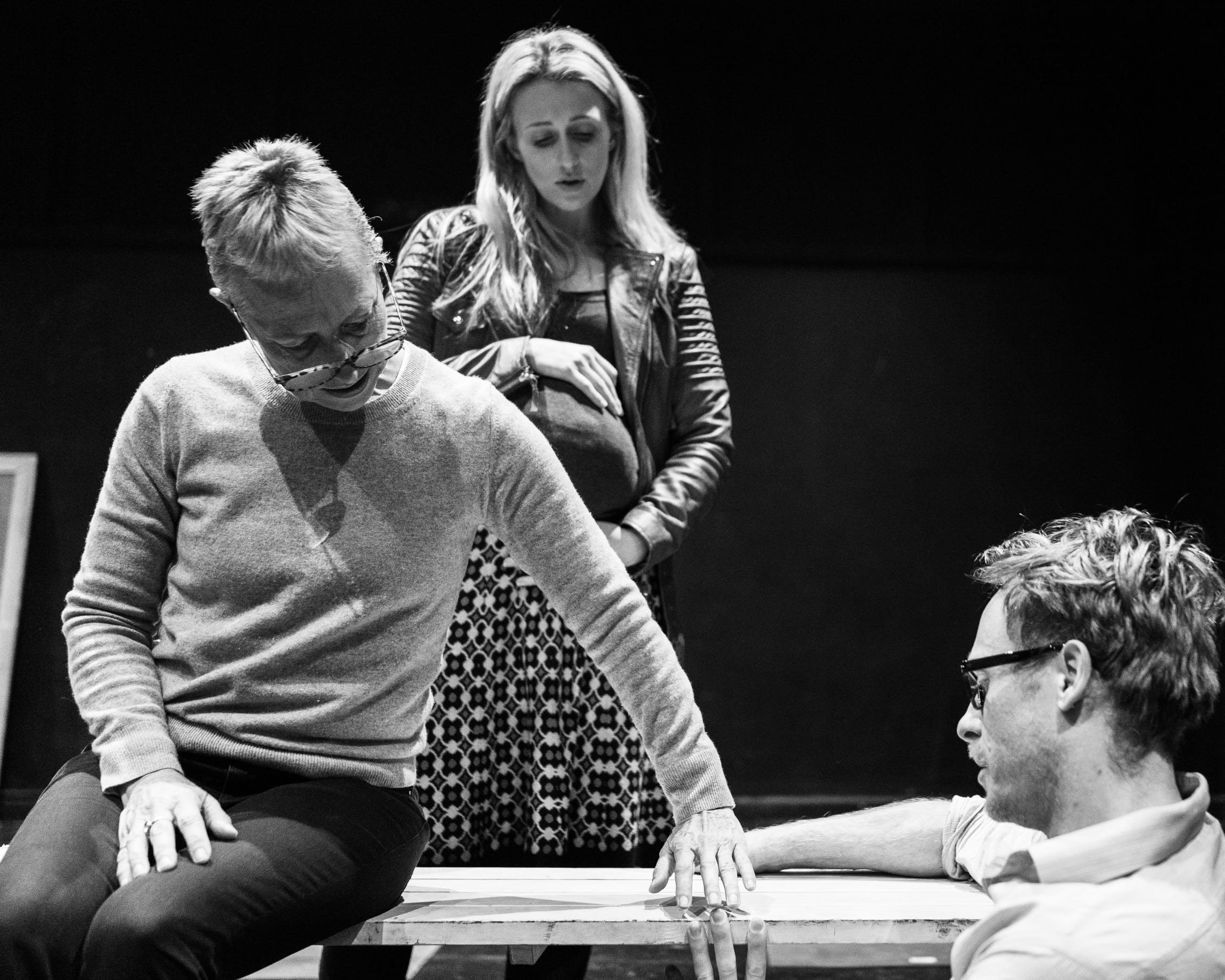 I really enjoy designing for devised theatre, and Polygraph represents this golden half-way point between a text or traditional play, and a completely devised work. The ideas are drawn from the text, but there’s a lot of great physical exploration happening too.

One of my design challenges has been trying to create something that mirrors the Berlin Wall in a non-specific, industrial kind of world. We wanted to make a non-literal wall of oppression that could still be pushed through, transgressed and climbed.

We’ve been playing with a fairly minimal range of materials and props. It’s a kind of reconnaissance style of theatre, where Tanya has sourced a number of props for us to play around with to see what we can make of them.

In terms of costume, we’ve been looking at a lot of colour and non-specificity of time and place. We’re trying to create a general mood, rather than the specificity of a period.

There are multiple generations of graduates and staff from the VCA in this work, including: current and former VCA staff Tanya Gerstle, Geraldine Cook, and Loraine Little; theatre graduates Grant Cartwright, Emily Thomas and Lachlan Woods; sound designers Matt Furlani and Julian Dibley-Hall; and lighting designer Jason Crick. Of the current generation of VCA students is Romi [Kupfer, Assistant Director], myself, and production manager Olivia Clark, who is currently completing her Bachelor of Fine Arts (Production) in Stage Management.

It’s a really inspiring environment to work in and I have particularly enjoyed being surrounded by so many women who have had significant impacts on the art scene over the last few decades.

Our production of Polygraph puts a new spin on [Lepage’s] text, unlocking it from its history. Lepage’s play is rife with dark suspicion, questionable institutions and withheld information. I think our interpretation will ask the audience to consider our present experience, and whether much has changed at all. 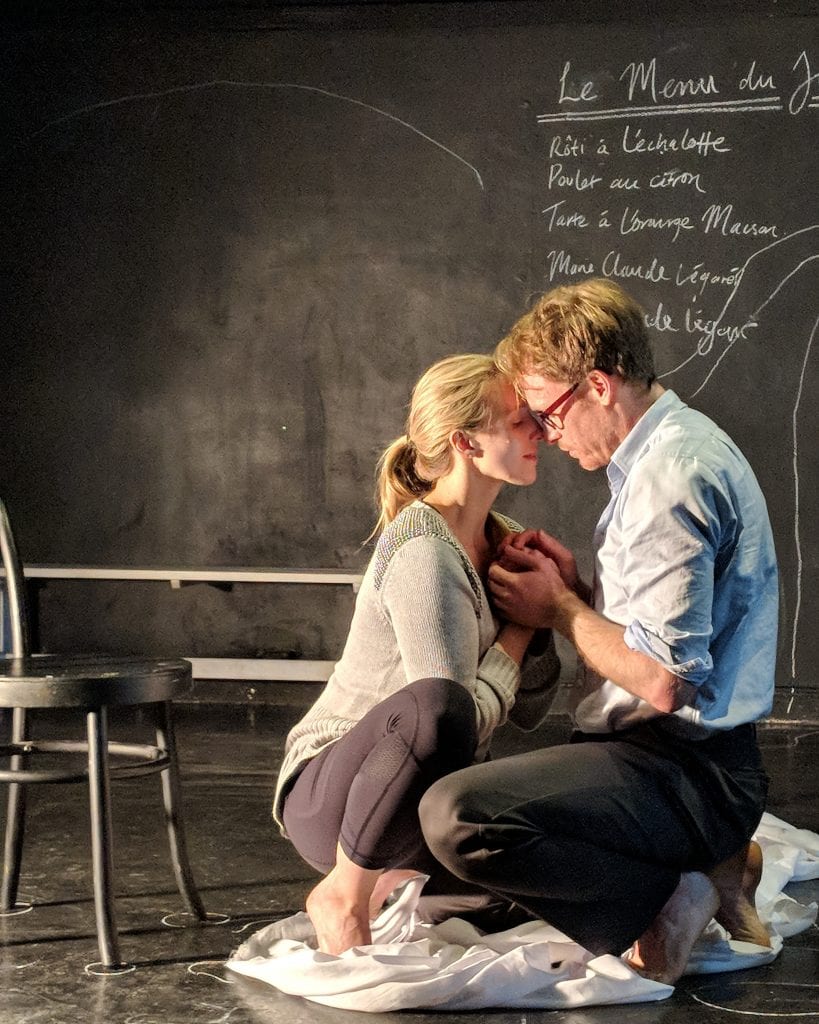 Being the Assistant Director on Polygraph has meant an active involvement in Tanya’s physical theatre-making process. In rehearsals, I take notes based on the physical work we are doing, which we then discuss as a group at the end of the session. I support Tanya and the actors in the rehearsal period, and throughout all the shows.

Working as Assistant Director on Polygraph is a fantastic complement to my studies [Master of Directing for Performance]. I am a theatre-maker who works physically so experiencing how text can be combined with physical theatre is a great addition to my theatrical learning experiences.

Another great part of working on Polygraph has been the opportunity to work with outstanding women making provocative, challenging and exciting work. To be in a room with Tanya, who’s an incredible, well-established, independent artist, alongside others like voice-coach Geraldine Cook, has been an absolute joy and honour. To just be around them and be privy to their practice in an industry that is so dominated by men is inspiring.

Polygraph is an exciting and evocative piece of theatre. I think that the uniqueness of Tanya’s physical rehearsal process really changes the dynamics on stage, and will be a new experience for many audience members.

Polygraph is showing at Theatre Works in St Kilda from 17 — 29 July. $15 Student Preview tickets available for performances on 17 and 18 July. Bookings via the Theatre Works website.