The Faculty of Fine Arts and Music is hosting The Image is not Nothing (Concrete Archives) following the exhibition's premiere at ACE Open as part of the 2021 Adelaide Festival program.

The Image is not Nothing (Concrete Archives) is co-curated by Lecturers in Art at the Victorian College of the Arts Lisa Radford and Yhonnie Scarce. The exhibition exists in online and published iterations on Art and Australia, and in an accompanying archive and catalogue designed and published by Person Books.

Here, Sharon Grace Flynn talks to Lisa Radford and Yhonnie Scarce about the history of munitions production in Melbourne and the curators' process of searching for acknowledgement of nuclear genocide and memorialisation of sites of colonisation in Australia.

On the edge of the Maribyrnong River, the site that today comprises Pipemakers Park and the Living Museum of the West is significant to the industrial history of Australia. It was the principal Australian factory of the Hume firm which pioneered the invention and export of steel-reinforced concrete pipes, used for updating water infrastructure and for munitions production.

“The British government exploded 12 full-scale atomic bombs across the Monte Bello Islands off the coast of Western Australia, and Emu Field and Maralinga in the South Australian desert. One of the tests that occurred at Maralinga reached twice the size of the bomb dropped on Hiroshima,” co-curator Lisa Radford says. “It is possible that the missiles that were developed locally were used as nuclear warheads for weapons development testing carried out on Indigenous ancestral land in Maralinga in the 1950s and 1960s, which is the subject of several works in the exhibition.”

A new artwork by Matthew Davis has been included in this iteration of The Image is not Nothing (Concrete Archives), including interviews with Kerrie Poliness and Peter Haffenden from the Living Museum of the West, discussing the history of the munitions factory and testing.

“Yhonnie Scarce talks about artworks and information finding us in our field research. You have to be in the right place for things to find you,” says Radford. The co-curators travelled extensively to visit sites with significant histories of devastation, including Auschwitz, Chernobyl, Fukushima, Hiroshima, Maralinga, New York, Wounded Knee and former Yugoslavia: sites which form an archive of human history and loss.

The exhibition positions artworks as memorials, searching for a language of acknowledgement in an Australian context by looking to sites of significance overseas – from Ground Zero to the Spomeniks. "I was introduced to the Spomeniks, the WWII memorials in former Yugoslavia, by an architect friend of mine. I’m obsessed with them. Something in their form speaks to the memory or is a placeholder for the site, for people to gather,” says Scarce.

“Going to Wounded Knee to the site of the massacre of the Lacota people had been important in my memory from having seen a film, Thunderheart, in my teens. It was the representation of something that was unrepresented in Australia.” 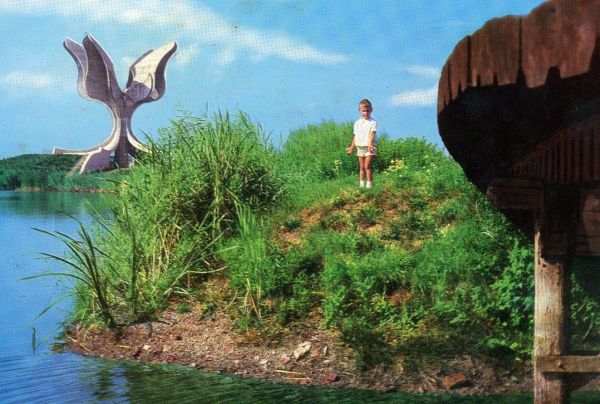 Each of the works is about genocide or erasure of a people, or a landscape and its histories. The exhibition is a call to action for Australians to commemorate and recognise our own history of genocide.

The Image is not Nothing (Concrete Archives) is installed across two sites: the Margaret Lawrence Gallery in the Melbourne Arts Precinct, University of Melbourne Southbank Campus, and Melbourne’s Living Museum of the West, in the City of Maribyrnong. An ecomusée focused on the identity of place, based on local participation and recorded oral histories, Melbourne’s Living Museum of the West remains an archive of the lived histories of Melbourne and Victoria’s West.

David Sequeira, Director of the Margaret Lawrence Gallery, speaks to the research and learning experience of the exhibition. “The Victorian College of the Arts has been the space which their ideas have been incubated, expanded and refined and I am especially honoured that the Margaret Lawrence Gallery can showcase the depth of research. It is important to acknowledge that during the curatorial process, both curators continued with their academic roles and their studio practices, affirming the place of teaching and artistic exploration within the curatorial development of the exhibition.” 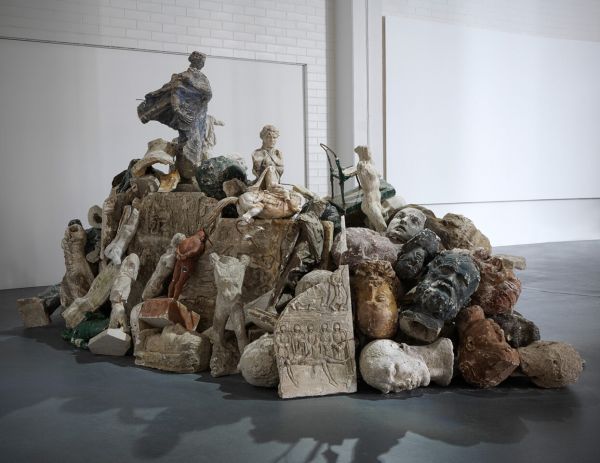 Scarce and Radford reflect on how the site continues to contribute to the work.

“The artworks are, or we have treated them like, memorial. Each is given its own space, its own time. We want to create space for reflection on memory and make sure that important memories are represented – ones that were missing,” says Radford. “Mareike Bernien (artist) talks about the idea that memory is an ongoing project, it’s an unfinished, living thing."

“Holding people accountable through this project is important, too,” Scarce continues. “Making sure people are aware that it’s not just in Australia. It’s global. And it is scary how similar things are in different times. It is repeating itself right now. Different techniques but the same idea of how to take that which is not yours.”

“Cultural genocide relates to loss of land, loss of language, loss of cultural rites. When you’re told not to speak your language or history that’s violence,” says Scarce. “Phil Collins’ film documents testimonies from Albanian survivors recounting why they no longer speak Serbian. The importance of that work is tied to the importance of language. If language disappears, how do we share histories?”

“Waanyi multi-media artist Judy Watson’s The Witness Tree is important to the exhibition. Those trees witnessed. They saw everything. They do something completely different in this space. Judy Watson’s work is important in reclaiming some of the loss. All the works in the exhibition are about that. Megan Cope’s Morning for Menindee (dry clay, emu eggs with decal, feathers and fish scales), documents the destruction of the Murray River Darling basin,” Scarce says.

“There is a conversation between all of the works in the show to fill in some of these gaps,” says Radford, “and ask for a new space to be considered.”

“It’s probably an old space that they are asking to be considered,” Scarce responds. “The beauty of art, writers, filmmakers, you can make something that people are going to see. In Australia, Aboriginal people have been waiting. It’s not just this government, it’s every government. What are you going to do? What structural changes, what negotiation will there be?”

“It has to be from us on the ground that a question is posed to power,” says Radford. “There has to be another way to talk about this because otherwise we will all be stuck in an inability to govern ourselves and make change. We stay as an image of the coloniser. And I don’t think that is what we are. Markers, sites acknowledged, history acknowledged. The Frontier Wars acknowledged. Make it clear which sites are those sites of significance in Australia.”

“We are using artworks brought in internationally to continue the conversation. We’re having conversations with each country really through them, I feel, so that everyone is aware of what is going on in each other’s place through the works. This is the home of the oldest living continuing culture in the world. We are making sure that history remains alive and is not forgotten,” says Scarce.

Yhonnie Scarce belongs to the Kokatha and Nukunu peoples. Scarce is an interdisciplinary practitioner whose work often references the on-going effects of colonisation; in particular the removal and relocation of Aboriginal people from their homelands and the forcible removal of Aboriginal children from family. Her exhibition Missile Park is currently showing at ACCA.

Lisa Radford is an artist and writer. A collection of her writing was published in the book Aesthetic nonsense makes commonsense, thanks X by West Space and Surpllus. She is currently in artist residence at Gertrude Contemporary. More often than not, she works with others, most recently with Sam George and Yhonnie Scarce but previously with TCB art inc. for 15 years, and as a member of the collective DAMP. Currently working in Honours and Painting at the Victorian College of the Arts, University of Melbourne, she shares thoughts publicly and intermittently in The Saturday Paper.