David Batchelor is one of more than 30 artists whose work will feature in Monochrome: Empty & Full at the Margaret Lawrence Gallery in Melbourne in May.

Hi David, you began collecting one-sentence statements about the meaning and value of colour in preparation for the 2008 anthology you edited, Colour. Is there one (or a couple) that still stand out for you?

I’m quite fond of all the sentences for one reason or another, but there are a couple that I return to a lot. The best for me is the apparently very simple, not to say downright obvious, remark by Walter Benjamin: “Colour must be seen.” Do we really need a melancholic German mystic Marxist philosopher to tell us that?

Your exhibition at the Margaret Lawrence Gallery will be the second showing of Colour Is. Can you tell us about the work, what has changed since its first showing in 2018, and what people can expect from the show?

Colour Is is one of those works that didn’t begin life as a work at all. It began as a little game I found myself playing as I was reading a number of texts on colour. But it gained its own momentum as the list of sentences grew. I decided to use it as a work when I was planning an exhibition in Tehran, in the knowledge that none of my writing on colour had been translated into Farsi. I thought it might help point to some of the strangeness of the discussion of colour in the West. That was in 2017.

Since then I’ve found sentences by Pierro Manzoni, Louise Bourgeois, another by Henri Matisse, and one by Henri Cartier Bresson. It is, incidentally, the only work I have made that employs any text. One thing I try to avoid in all my work is being didactic or preachy or earnest, which generally isn’t a problem with colour but often is a problem with writing. I think of art as an invitation to look, no more, and no less. 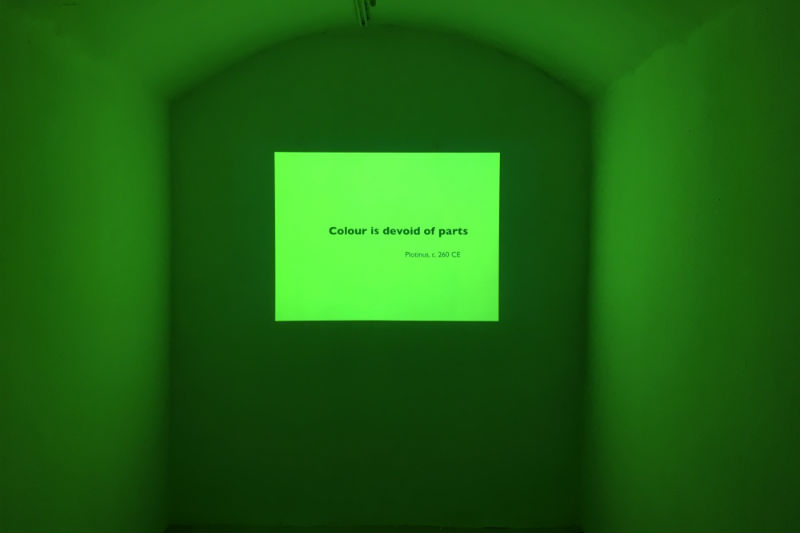 You’re known for site-specific sculptures and installations? Is there one of these you are particularly proud of?

“Proud” is not quite the right word, but one work that is very important to me is Magic Hour, which was originally made in 2004 and remade in 2007. It is a long story, but for me it’s the first work I made that was both about colour – gorgeous, luminous, uncontained colour that bleeds into other colours and into the surrounding space – and about darkness, which is a particular quality of the way we often experience colour in the city.

This has led me to make a lot of other work, mainly works on paper that use a silhouette form surrounded by luminosity. The exhibition I’m doing at RMIT in a couple of weeks has a lot to do with this.

Do members of the public (and even other artists) “get” monochrome art? Have you noticed a difference in the way this type of art has been celebrated or vilified throughout your career?

I’m not always sure I get it myself … One thing I do like about monochromes is they can be seen both as the highest most rarefied achievement of abstract art, and the lowest, dumbest form of painting it is possible to make. Some people love monochromes, some people despise them, some are entirely indifferent to them, but if you have ever painted a door you have made one. In that sense, as well as others, they are both empty and full.

I don’t actually paint monochromes but I do photograph them. The monochromes I find in the streets – in London, Sao Paulo, Berlin, Hong Kong, or wherever – are, for all their apparent simplicity, often ambiguous: both planes and voids, presences and absences.

Monochrome: Empty & Full and Colour Is are at the Margaret Lawrence Gallery, Southbank, Melbourne, from 4 May to 2 June.