Visual Artist Scotty So opens up about drag, authenticity, and getting mistaken for Carrie Lam on the internet

In 2019, Scotty So began exploring notions of reality and authenticity – but how did this lead to his alter-ego being accidentally picked up by international news media?

Scotty So arrives at the External Relations office, at the Victorian College of the Arts, on a stylish folding scooter. He’s wearing an airy linen shirt – a sensible choice in the oppressive heat of the Australian summer. This is the first time I’m meeting Scotty the artist, but not the first time we’ve met. I met his alter-ego Scarlett at the end of 2019 – a vision of vintage pin-up glamour in a red and white floral cheongsam.

In February 2019 So embarked on a Bachelor of Fine Arts (Honours) in Visual Art exploring the notions of reality and authenticity. It was part of this exploration that found Scarlett accidentally picked up by international news media.

The Course Coordinator for the Visual Art Honours Program Cate Consandine approached me with her list of rising stars. Could I please photograph these prize-winning artists with their graduating artworks? And had I heard of Scotty So? He’d recently been mistaken for the prominent politician and Chief Executive of Hong Kong Carrie Lam on an Italian news site. I couldn’t resist the story and invited So to come in for an interview.

Needless to say, So cuts a jaw-droppingly beautiful figure as his alter-ego Scarlett So Hung Son.

“Scarlett is the symbol of an Oriental silhouette,” he says. “She’s the drag persona that allows me to become the beauty that I always wanted to see. And when I look at myself in the mirror, I see the woman who I wanted to become.”

So describes feeling barred from the Chinese tradition of wearing cheongsam (a form fitting gown of Manchu origin): “As a boy, I would never be able to wear it. And when my cousin got married, my grandmother gave her the cheongsam from when she got married, and it really hit me. I went to my grandmother's room to look at that dress, but wasn’t allowed”. His response? Adopt another identity as a woman, and wear exclusively cheongsam.

This is how Scarlett So Hung Son was born.

“I needed a way of dealing with the feeling of frustration and dislocation at watching my hometown [Hong Kong] fall apart”, describes So, “initially I had hope in Carrie Lam when she was elected Chief Executive of Hong Kong … but that didn’t last long”.

The outlet for his disappointment became performing as Carrie Lam in drag. She was a perfect to explore in this medium – “I was doing a very sensual burlesque, stripping her of clothing and power, showing emotion”.

The emotional vulnerability So found in this medium became the basis of a photography project, Carrie’s Four States of Emotion (2019). The works are an alternative reality featuring Lam expressing happiness, anger, joy and sadness at a real press conference (with So performing as Lam, of course). 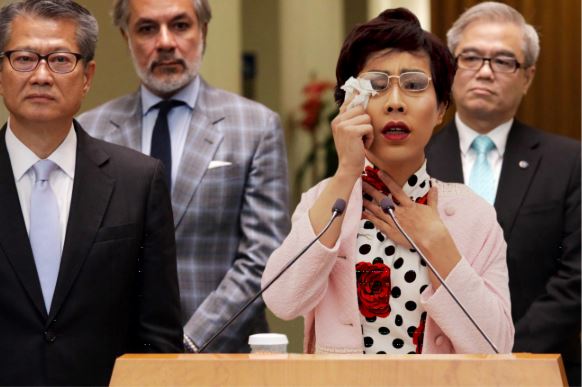 So uploaded these images to Wikipedia. “At the time I didn’t realise that when you have pictures on Wikipedia they become part of this huge database of images that are free for anyone to use. Lots of the newspaper or news sites not wanting to buy copyrighted material use this archive to find content,” describes So with a wry smile.

Enamoured with the idea that an artist might somehow rewrite history by editing an archive, So began uploading pictures to pages all over the website. “I put a picture of me dressing up as a burlesque dancer in the '40s and put it up on Asian Fetish …  then there was one of me dressing up as a Manchurian lady, a noble lady, with a huge headpiece.” 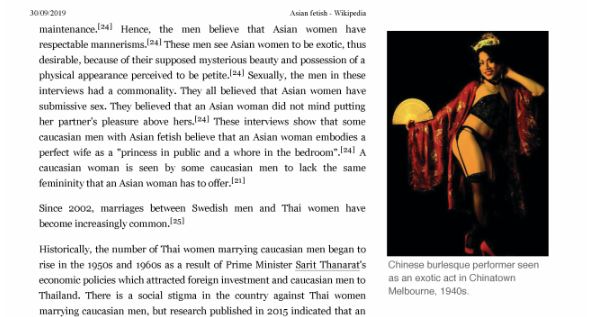 While it didn’t take long for Wikipedia content moderators to take the image down (and subsequently barre So’s account from posting), it seems the photos were around long enough to beguile a handful of content-hungry international news journalists.

So started receiving text messages and screenshots from friends. “An Italian news site, and an English news site had used the photo I’d uploaded onto Wikipedia in articles about  Carrie Lam.” It was his ideal outcome – “That picture became the Carrie Lam in Italy, and the best part is, the Carrie Lam that that newspaper knows is emotional, campy, and seen to care about people.” As I watch him mount his scooter and disappear down Southbank Boulevard, I feel like I have more questions than when I started. Who feels more real to him? Scotty or Scarlett? Was the Carrie Lam mix-up a deception? Or is it all just a glitch in the Matrix. Either way, So has informed me that there are still a handful of photos of Scarlett to be found on Wikipedia, but where they are? That's our secret.

Born and raised in Hong Kong, So graduated BFA Honours at the Victorian College of the Arts with First Class Honours in Melbourne, Australia, 2019. So’s work has been displayed in two solo and several group shows, including exhibitions in Hong Kong, China and Australia.

You can get to know So and Scarlett on Instagram at @scotty.so and @scarlettsohungson, or keep an eye on his website for more information.