More than $100,000 has been raised for Wildlife Victoria and the Gippsland Emergency Relief Fund in an art exhibition hosted by the Victorian College of the Arts at the Margaret Lawrence Gallery.

The Art Schools for Fire Relief Exhibition (30 January–1 February) featured works donated by more than 100 artists drawn from staff and alumni of the Victorian College of the Arts at the University of Melbourne, Monash University, RMIT and Deakin University.

Some 81 pieces were sold from the 126 available, raising $102,200 for the exhibition’s chosen charities.

Speaking at the opening night at the Margaret Lawrence Gallery on 30 January, visual artist and outgoing Director of the VCA Professor Jon Cattapan, who donated one of his artworks to the exhibition, said he wanted to personally thank all of the participating artists.

“Artists always manage to rise to the occasion,” he said. “When things get really tough, they get in there and help willingly. I also want to thank all of the commercial gallerists who have been incredibly generous and willing to part with their commissions for this important cause.” 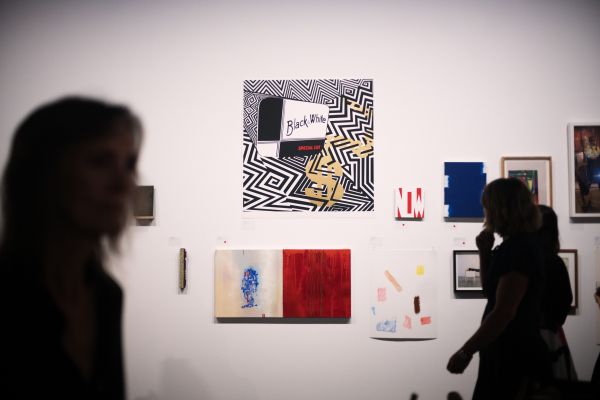 The exhibition was conceived of in January in the midst of the devastation wrought by Australia’s unprecedented bushfires.

Professor Kathy Temin, Head of Monash University’s Department of Fine Art and a contributing artist, said the exhibition was an opportunity to draw attention to climate change.

“As artists and academics, we are concerned by the devastation that climate change is causing,” she said. “We want to immediately support the people, communities and wildlife that have been so devastatingly affected by these extreme bushfires.

The exhibition, she added, was an opportunity to “buy some great artwork and provide much needed funds to help affected communities to rebuild their lives".

A full catalogue of the works donated to Art Schools for Fire Relief is available online.