Buoyancy is Australia's submission for Best International Feature at the 2020 Oscars. We talk to the director of this brutal and beautiful film.

It sounds like a recipe for disaster: shoot your first feature film at sea, in the confines of a small fishing trawler, with a largely untrained cast, most of whom don't speak English. For extra points, shoot in the wet tropical heat of a Cambodian summer and make it a harsh story without much of a feelgood factor.

But writer-director Rodd Rathjen refuses to sound heroic when he talks about the making of Buoyancy, a film that manages to be both brutal and beautiful; a tense thriller and an important social justice narrative that will probably be the most important and internationally acclaimed Australian film of the year.

"It was tough shooting on water," he admits, "but anytime we felt like complaining we reminded ourselves we were making a film about guys who had spent anything up to 15 years on a trawler at sea, so we could hardly complain about a few weeks." He concurs mildly that yes, there was a lot of seasickness –  as everyone else on the production carries on about at length – "but we had those tablets to help".

Rathjen has the quiet, capable demeanour of a farmer. He doesn't relish publicity; in fact he seems actively resistant to it. "Wasn't it Terrence Malick who said you don't get the architect to sell the house?" he says with a laugh. He says his favourite part of filmmaking is the scriptwriting and the solitude that comes with it.

Rathjen comes from a large farming family around Colbinabbin, a small country town in central Victoria with "a vineyard, and cereals and grains, hay and tomatoes, and a bit of corn and maize". He went to a country high school with very few arts subjects available. "I was always interested in storytelling, books and films, but I had no idea what to do with it." It took him a few years after high school to work out that he wanted to go to film school, and he must have wanted it badly as he was knocked back from the VCA  "four or five times until they took pity on me and let me in".

Rathjen has spent a fair bit of time working on the farm since graduating from film school at the VCA in 2010, and he still works there between films. "My whole family probably still thinks I’m crazy with what I’m trying to do – they've always said, 'Don’t do anything in the arts. There’s no money in it!' And they’re right." He says if film doesn't work out for him long-term he may still end up becoming a farmer and he wouldn't really mind. But this seems unlikely, with Buoyancy just announced as Australia's official submission for Best International Feature Film at the 2020 Academy Awards.

Since graduating, Rathjen has made some internationally acclaimed shorts, like Tau Seru, a film that was set and shot in India. It premiered at Cannes as part of Critics Week 2013, before screening at over 50 festivals. This marked him as a director to watch and put him on the radar of producers Sam Jennings and Kristina Ceyton. He received the Directors Acclaim Fund from Screen Australia in 2014 and also participated in the Berlinale Talent Campus as a director.

It was also at the Berlin Film Festival where Buoyancy had its world premiere earlier this year, winning the Prize of the Ecumenical Jury Panorama 2019, and the Audience Award Panorama Third Place. Rathjen finds this surprising, as "it's not really an obvious crowd-pleaser". The film was also an audience hit at the Melbourne Film Festival, where it had its Australian premiere and was a Top 5 MIFF Audience Award Winner.

Produced by Causeway Films' Jennings and Ceyton (The Babadook, The Nightingale, Cargo) and Rita Walsh, with major investment from Screen Australia, as well as support from Film Victoria and the MIFF Premiere Fund, Buoyancy is not an obviously Australian film. It tells the tale of a 14-year-old Cambodian boy (Sarm Heng) who finds himself enslaved on a Thai fishing trawler, working night and day for a handful of rice. As he sees his fellow workers beaten and murdered, he gradually loses his humanity and decides the only way to escape is to emulate his captors, including the cruel but charismatic captain of the boat (played by Thanawut Kasro).

The story was inspired by a news article Rathjen read about the plight of the estimated 200,000 boys and men working in forced labour in the fishing industry in South East Asia, a $6 billion industry that supplies fish products to the world, including Australia.

When asked if he ever considered choosing easier material for his first feature, he says: "I didn't think about it like that. I just felt this was a really important story that needed to be heard. And the more I researched and interviewed survivors, the more I was compelled to make it happen and to tell it in the right way. I wanted to make an authentic film that would engage an audience with a human story, rather than being an issue-based film."

"I wanted to make an authentic film that would engage an audience with a human story, rather than being an issue-based film."

After receiving development funding from Screen Australia, Rathjen engaged in a deep research phase of reading, researching and traveling, staying in homestays in Cambodia and interviewing about 50 survivors who'd been trafficked on trawlers. He says this helped to refine the story and to get as comprehensive a view as possible of the culture he was depicting. If you think Buoyancy is extreme in its depiction of the ill treatment of workers, he says, it's actually a mild version of the reality.

Shot by cinematographer Michael Latham (Strange Colours, Ukraine is not a Brothel), Buoyancy is a visually gorgeous film, showcasing the beauty of the ocean, the sky and the face of its young star, often at magic hour in dawn or dusk. Rathjen says this softness was a necessary antidote.

"It could be a film that’s just relentless in its brutality and violence, but it was really important that we held on to this human impressionable young point of view for the audience to engage with it, and we wanted to make it quite poetic. It’s a coming of age story, not necessarily in a good way, but we wanted to separate those moments of murder and violence and brutality with these quiet introspective moments.

"Out there it’s like a floating prison, but it’s also kind of beautiful. The ocean is beautiful and endless, and we tried to shoot a lot of it in really soft light to give it the right tone and rhythm, and ensure that the audience is asking the question of where this boy is going to end up, and what’s going to happen to him?" 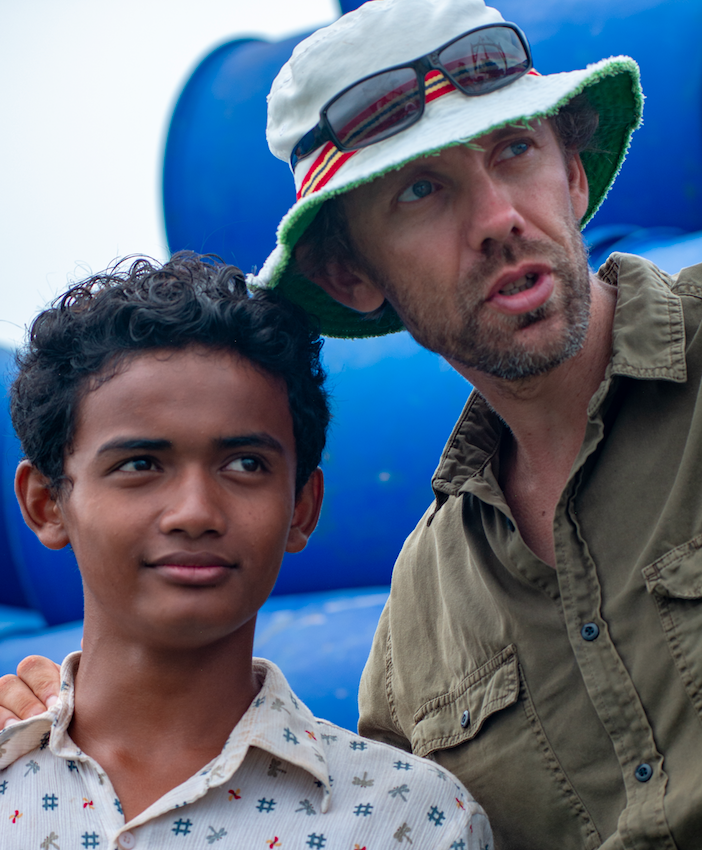 Much has been made of visual beauty of the film, and of Latham's skills, but like any good director Rathjen wants to highlight the talents of the rest of his creative team, "all these amazing craftspeople are the ones that make me look good". He says that the sound is really critical. "Sound designer Sam Petty, and the score by Lawrence English, they've both done an amazing job in expressing the emotion of the story." He also wants to credit his editor, "Graeme Pereira – nobody talks about the poor editor – but they are so crucial in shaping the film, and he's just so talented and this is his first feature."

Rathjen says that shooting on a boat with 80 people was an incredibly claustrophobic experience. They were exposed to the elements of sun, wind, rain and ocean, and had to be strategic in terms of choosing a fairly protected cove. They had a supply barge up alongside the boat "so it was easy for people to jump on and off, depending on filming". Due to the panoramic views needed, with no land in sight, they had to shoot many scenes far out from land and this meant going out to an island for three weeks. "I think we ruined everyone's ideas of an idyllic tropical island," Rathjen says.

It's a sign of the times that one of the most difficult aspects of the shoot was a lack of WiFi and phone reception. "That was the worst part," he remembers, "because people couldn't talk to their family or friends. It was so isolating they went a bit stir crazy. On a film set there's a lot of standing around if you're not involved in a scene and usually it's easy to distract yourself with your phone, but this was like the olden days."

As far as dealing with the language differences on a shoot, Rathjen says, "The first thing I did after we got finance was to storyboard the whole film with a storyboard artist, Peter Sheehan. We felt it was going to be a very important document over there because of the language barrier, and it was."

He says that if you're shooting in especially difficult locations, then being strategic and organised is even more important than on a regular shoot. So too, having a team around you who "really care about the story that you're trying to tell". Having a good producer on location was key, and Rathjen credits Sam Jennings for being there for the entire shoot and pre-production, for being "an incredibly creative problem solver who cared about the aesthetic of the film on a very deep level".

Getting your casting right is also more essential than ever when you're not shooting in English. "If you get the casting right the directing becomes much more achievable,' he says, noting that Thanawut Kasro, the actor who plays the charismatic villain, doesn't speak a word of English, "and yet we understood each other perfectly. He's very cheeky, and so am I".

As for what's next for Rathjen – whose cheekiness we'll have to take on faith – he says he's attached on another project that has "similarly difficult material" to Buoyancy, but he's also writing a comedy. "I don't want to be pigeonholed, but I'm not sure they'll trust me with comedy," he says with a laugh.

This article was originally published at ArtsHub.

Applications for graduate study in Film and Television courses at the University of Melbourne close on 15 October 2019. Visit Study for more information.

Find out more about Film and Television at the Victorian College of the Arts, University of Melbourne.