Disclosure: an Australian indie film and the team who made it

Michael Bentham, who holds a PhD from the Faculty of Fine Arts and Music, describes his debut feature film Disclosure as a micro-budget ensemble drama that plays out in real time. I’m talking with him and producer Donna Lyon, Senior Lecturer in Film and Television (Producing) at the Victorian College of the Arts, who worked closely with Bentham for more than four years to realise the feature.

“Disclosure is about two families who start off the film ostensibly as friends,” Bentham says. “They meet to discuss a serious allegation that's been made by the four-year-old daughter of one family against the nine-year-old son of the other family. The film asks a really simple question: do we believe the stories that younger children tell?”

The film explores the complex responses of adults and parents to allegations of child-on-child assault. “Four middle-class adults begin a difficult conversation,” he says. “You very quickly see how that civility is shed and the wheels come off and it turns into a pitched battle. It explores patriarchal power structures, and I wanted that to resonate.

“When we were in the early stages of putting the film together and were trying to draw down finance from screen agencies, there was skepticism voiced from those agencies about whether there'd be an audience willing to engage with this material. But since then, it has been very clear to us that there is a large and disparate audience who are ready to engage with this material in a thoughtful way. It’s been affirming.”

The film follows four characters through a real-time journey in one location, and was shot in the Dandenong Ranges in Melbourne. The first theatrical release of Disclosure was at the Cameo Theatre in Belgrave, close to where filming took place.

Lyon and Bentham spent six months working on the script and finished filming in three weeks in the summer of 2018. The sound design was delivered separately in January of 2019 – almost a year after filming ended. Lyon reflects on the process of bringing the film to life:

“Michael emailed me and said he heard I was looking for a project,” she says. “I read the script, and I loved it. It really spoke to me and I thought it was achievable, realistic and it had something to say. We met and that was it. We chose the best pathway, but it certainly came with some deep learnings. It’s sort of a lifetime commitment, as the film goes through its various iterations, and lives on.”

Bentham, a filmmaker, screenwriter and composer who has been working in film for 30 years, describes the challenges of working completely independently on a film in the Australian industry as a journey of small successes, which have culminated in the successes the film is enjoying now. “And getting the cast right, of course, was the first big success.”

Actors Geraldine Hakewill, Tom Wren, Mark Leonard Winter and Matilda Ridgway brought their real-life chemistry onto the set. “We got this extraordinary ensemble of actors,” Bentham says. “Four actors who have worked together and are friends. That brought an enormous amount to the film.” 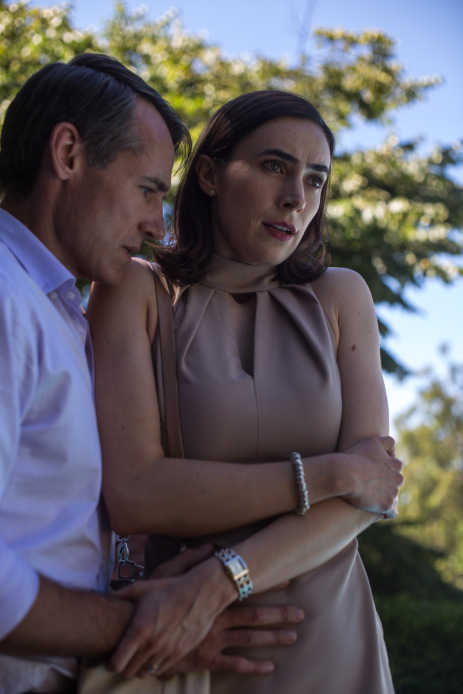 Speaking about the experience of the film showing at the Palm Springs International Film Festival in 2020, Bentham smiles. “We had three screenings there, and before our first screening, we're all super nervous. The cinema is packed out and the programmer, Jane Schoettle, is going to do a Q&A. Just before she took me onto the stage to introduce the film, she turned around to me and said, ‘I have to tell you, I'm not sure how this is going to land with an American audience’.”

As it happened, its premier at the festival last January led to it being subsequently acquired for distribution by Breaking Glass Pictures in North America and Bonsai Films in Australia and New Zealand.

As well as the challenges, Lyon says there are opportunities to be found in producing independent film. “It says a lot about Michael’s directing, the script and the cast. That’s what really helped us to cut through. The story lent itself to be made within the parameters of an independent production. That’s why I took it on.

Disclosure is showing at Cinema Nova from 25–31 March. Cinema Nova is hosting a Q&A screening on Sunday 28 March with Michael Bentham, Donna Lyon and members of the cast.