Australia’s seminal art journal, Art + Australia, will explore the conjunction of art and science in its next issue, titled Event Horizon, which will be released this month to coincide with a three-day symposium.

The Event Horizon Symposium, hosted by the University of Melbourne’s Centre of Visual Art (CoVA) and the Science Gallery Melbourne, will take place during National Science Week, on 17-21 August.

The Event Horizon issue of Art + Australia marks the fifth year of publication of the long-running journal under the auspices of the Victorian College of the Arts at the University of Melbourne. The forerunner to Art + Australia, known as Art in Australia, was first published in 1916.

“At 55-million light years away, this cosmic phenomenon cannot actually be seen optically," says Colless. "The image we have of it is generated by a breathtaking mathematical and computer interlacing of data from a global network of observatories. There is as much art as there is science in this image.

“Black holes and their event horizons – where space-time warps catastrophically and swirls like a maelstrom – have captivated the imagination of science-fiction writers and filmmakers over the past decades. Until now, they were the province of special effects artists trying to picture something that seemed inaccessible. But now we have a glimpse of the real thing.

“This eerie image of cosmic destruction may have appeared at a significant moment for us. Are we not gazing at an event horizon closer to hand with global warming, imminent insect extermination, and the human and economic calamity of viral pandemic?

“In the call-out for the Event Horizon issue we asked for art and writing that looks towards the limits of our world." 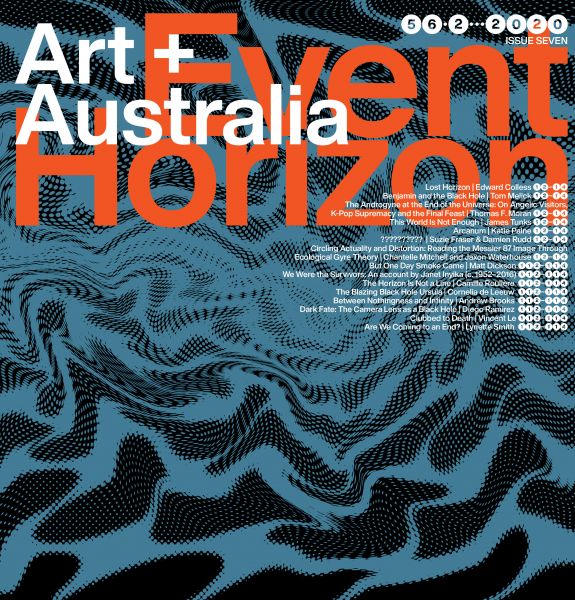 Highlights of the Event Horizon issue of Art + Australia will be:

The Event Horizon Symposium brings together artists, physicists and cultural theorists to discuss what an "event horizon" is, across topics ranging from black holes, dark matter, tipping points and new horizons.

The Symposium coordinator, Dr Suzie Fraser, says it represents a pioneering partnership between the Centre of Visual Art (CoVA) and Science Gallery Melbourne.

“The Symposium will provide a network for science and art to explore mutual themes of creativity and experimentation, as well as forecasting key issues for next horizons," says Fraser. “This virtual Symposium signposts a new phase in collaboration between the arts and sciences at the University of Melbourne, providing a forum through which audiences can engage with front-line research across these disciplines.

“It is through such assemblies as these that we can grasp the shared creativity and experimentation being carried out across the arts and sciences on topics of mutual interest and of consequence to all of society."

The Symposium will take place virtually, with new content released on the website across two days, on 17 and 18 August 2020. Two live plenary sessions will take place on Friday 21 August via Zoom.