From the VCA to RISING: The many guises of Scotty So

VCA graduate Scotty So is performing and exhibiting in this year’s RISING festival. Just don’t ask him to stick to one medium.

Scotty So finds working with just one media “rather dull”. Which may explain the Hong Kong-born, Melbourne-based artist’s prolific output at this year’s RISING festival.

The VCA graduate is rotating three different performances throughout the festival, as well as showing a life-sized hologram featuring six videos (two of which are new). His work features in the Golden Square, a Chinatown carpark transformed into an arts venue for the festival’s two-week run.

It’s a work ethic that would make most of us blush. But trying out different media and exploring new forms of expression are integral to Scotty’s practice.

“I have ADHD and I just get really bored working on one media only for too long,” he says.

“Our lives and the world we live in are changing constantly, so only having one media to work on or one topic to talk about is simply not enough for me.”

For RISING, Scotty’s performances are As She Floats, M. Butterfly and Let No One Sleep. All in drag, and all featuring opera, each performance reflects Scotty’s focus on the play between real and unreal, the camp and sincerity.

“In As She Floats, I dress as the Chinese moon goddess to perform a Chinese opera that only I can hear, with the long train from my robe reminiscent of how she floated to the moon in her tale,” he explains.

In M. Butterfly and Let No One Sleep, Scotty plays songs fromMadame Butterfly and Turandot from a speaker hidden within traditional kabuki theatre and Chinese opera costumes. The ‘real’ singer is Mavel Bautista, a professional soprano from the Philippines whom he commissioned for the exhibition.

“It looks and sounds like I am singing the songs while parading through the space,” he says.

And the performances don’t stop there. In the life-sized hologram videos, Scotty transforms into yet more characters, “like a genie in a bottle entertaining the audience’s kinky gaze”.

They include a 1930s burlesque performer, a Japanese anime virtual idol and a Chinese magician from a 1920s cubist ballet whose costume was designed by Picasso. Most of the videos reference the ways in which feminine bodies have been fetishised in holograms in science fiction movies (think of the geisha in Blade Runner).

“The performance and hologram videos not only reflect on cultural, gender and queer identity but, importantly, they talk about the performative quality of acting out identities,” he says. 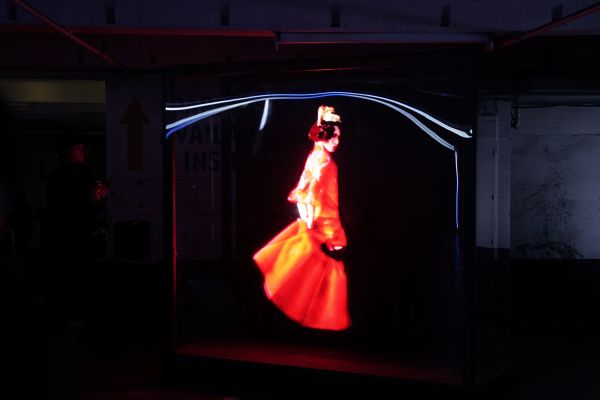 Scotty graduated with a Bachelor of Fine Arts (Honours) in 2019, and credits supervisor Dr Sean Lowry with helping guide his practice to where it is today, spanning painting, photography, sculptures, site-responsive installation, videos and drag performance. He also recognises the technical staff who helped make his ideas a reality.

“They were very friendly and patient and got excited about supporting the execution of my work,” he recalls.

Despite graduating less than three years ago, Scotty has already built an impressive C.V. that includes exhibitions for PHOTO 2022, the NGV Triennial and QUEER. For student artists looking to follow a similar trajectory, he has some sage advice.

“Have fun while at uni, experiment as much as you can, don't be mean.”

“And being cool is so boring.”