Hell’s Canyon, the Rodney Seaborn Playwrights’ Award-winning play by Victorian College of the Arts graduate playwright Emily Sheehan, will show at the Old 505 Theatre in Sydney and La Mama in Melbourne in August and September. Ahead of their 1 August opening night, writer Sheehan and VCA Theatre graduate and Hell’s Canyon actor Conor Leach talk about their teenage selves, writing push and pull, and moments of magic realism.

EMILY SHEEHAN: So Conor, in rehearsals you’ve shared that you see a lot of your teenage self in the play – can you tell me a bit about that?

CONOR LEACH: I play the character Oscar, who’s 15 years old and a bit of an outsider socially. The play also explores the damaging ways we can mask tragedy and trauma, many of which are inculcated in school, and I empathise with the “otherness” that Oscar feels because he sits outside norms of masculinity. I went to an all-boys school for five years, and I remember that in early high school, when “cool” became a thing, one’s performance of masculinity became crucial for social standing. I enjoyed high school, but this play reminds me that its social dynamics can be toxic.

EMILY: As an actor, what’s different for you working on a new play like ours as opposed to a text that has been performed many times before? Does it change the way you work in the rehearsal room?

CONOR: When working on a well-known text, I sometimes find myself treating the words as especially “sacred” because of its reputation. As a result, that “actor voice” caused by a preconception of how to deliver the text can creep in. Working on new writing inherently means that that’s less likely, and my impulses in the rehearsal room might be less manufactured.

EMILY: What about when you’re making your own work? What sort of theatre are you drawn to making?

CONOR: I love making theatre that juxtaposes opposite forces – where the pedestrian collides with the mythic, the ridiculous with the sacred, the personal with the global, the real with the surreal. Generally this results in work without naturalistic narrative or character, with an aesthetic of heightened theatricality. I also love durational work that subverts conventions of time – for me, it’s one of the most effective ways that theatre can challenge the everyday.

CONOR: OK, my turn. First, where do you start in your writing? An image, a theme, a question, or a character?

EMILY: It’s always character, but to be even more precise it’s usually the relationship between two characters that comes to me first. Once I know who two people are to each other, I can start to write into the space that exists between them. Then it’s a matter of putting into that space moments that will draw them closer together or push them further apart. So I start writing this sort of push and pull, which is usually when the shape of the play as a whole will reveal itself. 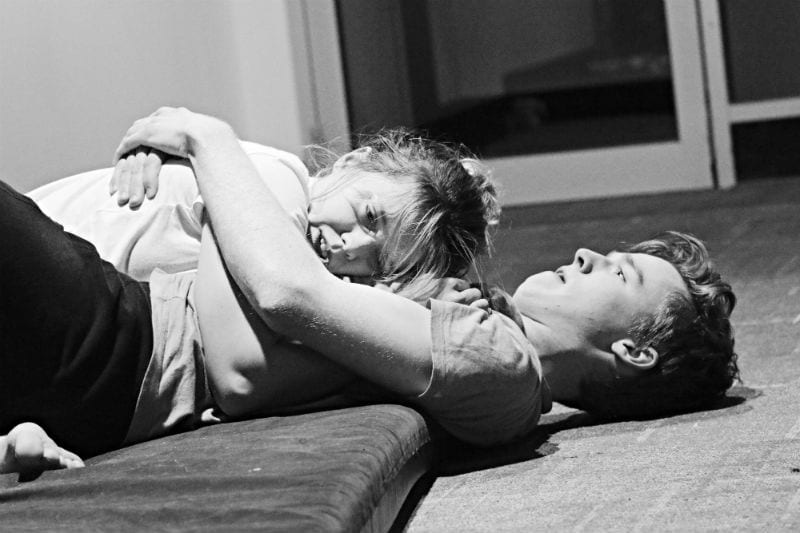 CONOR: And what about your writing process – how do you develop text?

EMILY: Before I’d written my first play I was part of the Playwriting Australia Dramaturgy Mentorships, so observing their play development process was quite formative for me. I know their workshop development model doesn’t suit every playwright, but I think it does work for my writing. My preference is to write a first draft solo, then work quite thoroughly with notes from a dramaturg towards a second draft, and only then do I find it helpful to do workshop the play with actors, a director and a dramaturg all in the room together. This is how Hell’s Canyon was shaped.

CONOR: Hell’s Canyon has seen a few developments and drafts. Throughout this process, what changes were made and how did you distil the text into its final form?

EMILY: I suppose the elements of the play which have had the most focus in terms of development and dramaturgical intervention have been the moments of magic realism. Through the development process I was definitely challenged to understand exactly why I was using this device, what the internal logic of the worlds were, and how they ultimately affected the audience’s understanding of the work. That’s what took the most work – to get the script to a place where I felt like it expressed exactly what I wanted to say with those moments.

CONOR: Was this always going to be a magic realism text?

EMILY: It wasn’t a conscious choice I made before writing the play, but it came out in the very first draft. You know how there are these moments in life where something shocks you to the core, and the external world all of a sudden seems almost inappropriately banal compared with what is happening in your internal world? Well the play’s form changes as the characters experience this phenomenon.

CONOR: What kind of stories do you want to see more of on Australia’s stages?

EMILY: I want to see new Australian work. Hands down, every single time, I would rather buy a ticket to a new play and leave disappointed than see someone nail Shakespeare. No matter how good an adaptation of Chekhov is, I don’t want to see it programmed at the expense of new voices and new perspectives.

CONOR: Finally, what do you hope audiences will take from Hell’s Canyon?

EMILY: My ultimate goal as a playwright is to have audiences leaving feeling like they’ve just been witness to a piece of humanity. I think live performance has a way of plugging straight into your heart if you can get all the elements right. That feeling, to me at least, is like being instantly connected with our own humanity. That’s why I love writing for theatre. What about you?

CONOR: A deep conviction that from tragedy, we can find fortitude.