Winging It – a web series produced by the University of Melbourne

“Heaven has been corporatised, and no-one hates his job more than Michael …” Winging It is a seven-part web series developed as part of a Faculty of Fine Arts and Music interdisciplinary collaboration. Meet two of its writers, and watch the first episode, below.

The Faculty of Fine Arts and Music’s inaugural Web Series, an ongoing annual project that began in 2018, drew together more than 100 graduation-level students to produce three independent short-form series. Students from the Master of Producing, BFA (Screenwriting), BFA (Film and Television), BFA (Acting ), and the BMus (Interactive Composition) were involved in the project, the most extensive collaborative venture undertaken by the Faculty.

The aim, according to Andrew O’Keefe, Lecturer in VCA Film and Television and one of the masterminds of this ambitious project, was to “erase perceived boundaries between students and to reflect current industry trends”.

O’Keefe emphasises the value of teamwork in an environment that consists of many moving parts. “Smooth-sailing teams do not necessarily result in the most engaging outcomes,” he says. “Often the opposite is true. The ability to maintain personal relationships through creative conflict is a physical, emotional and intellectual exercise that, if handled professionally, creates work in which the whole is greater than the sum of its parts.”

I spoke with third-year Screenwriting students Louey Stockfeld and Maddie McRae, writer and head writer/script-editor respectively on the series, which was developed from a concept pitched by fellow Screenwriting student Annabelle Ots. It’s a wickedly humorous satire about Heaven (and “downstairs”) being transformed into a soulless call-centre corporation, until a bright-eyed newbie angel, Lucy, appears at the pearly gates and ruffles some feathers.

Hi Louey and Maddie, how did you become involved in the Web Series?

Louey Stockfeld: There were 20 screenwriters and we each pitched one or two ideas at the start of 2018. From those, three ideas were selected to make three web series, each consisting of seven five-minute episodes. We formed writing groups to develop the pitches and then made the episodes with range of students, including those doing the Master of Producing, BFA (Acting) and BFA (Film and Television). We just all came together and made a TV show pretty much, which is cool.

Maddie McRae: Even though we’re all co-located on campus, it’s often difficult to do things with students from other disciplines because of our schedules. We all wanted more practical on-set experience, and this project provided that. 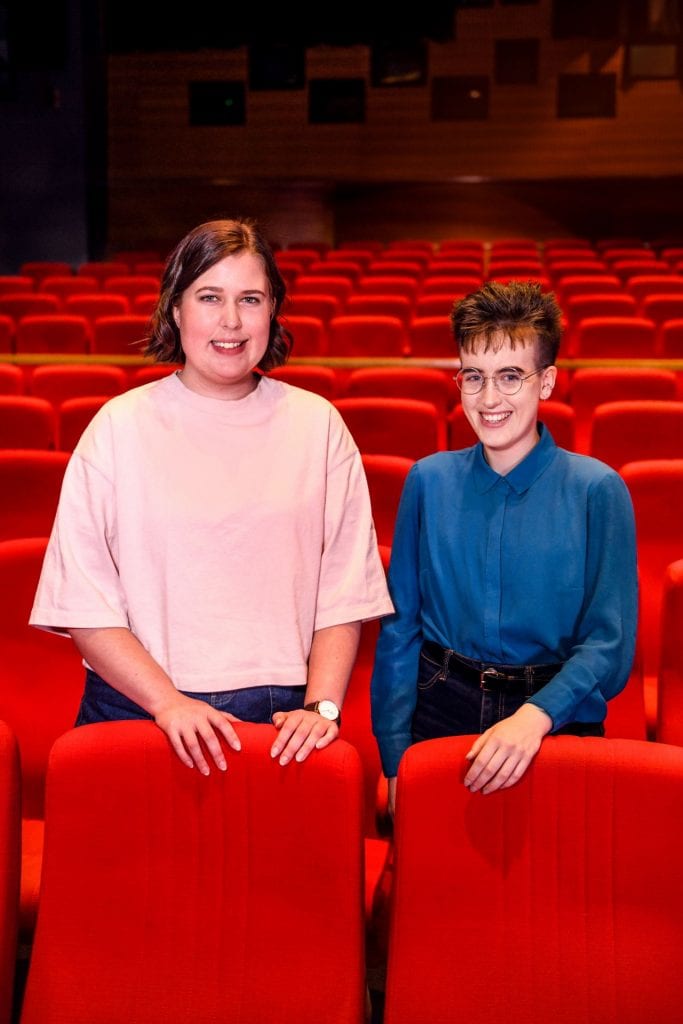 MM: In Heaven, nobody hates his job more than one of the angels, Michael. Paired up with an excited newbie, Lily, he’s forced to re-evaluate not only his job, but also his relationship with others.

LS: This series was my first choice when the pitches were delivered. I found Annabelle Ots’ concept really interesting. I’m pretty religious, so I was like, “Oh, I can bring some religion into this and have some fun with it”. When angels answer prayers they get a certain amount of points and accolades, but the prayers that get them the most points tend to be really unimportant ones. So our main characters wrestle with trying to do meaningful work in an environment that’s basically capitalism.

What were some of the challenges?

LS: In our first reading of Winging It we bombed really hard. We had to rewrite it from scratch, and that was really stressful, but I think that process made me a better writer in the end.

There were seven of us working on Winging It as writers, so it was a big team effort. We had to go through the process of learning from our mistakes and coming together to make a good product. The seven writers were assigned one episode each.

MM: My job was to do a tonal edit on all seven episodes and make sure the scripts were roughly the same length. A major challenge was fitting into a TV production hierarchy, which was strange when you’re working with your friends. Producers come first, and that was something we all struggled with for a while.

Another major issue was the tight timeframe we had. We had to have our scripts locked off after two weeks, and this, combined with the long shooting days, which often went for more than ten hours, resulted in a lot of sleeping on set.

LS: I did continuity (script coordination) as well, so I was on set for all of the filming. Seeing it as a finished product was really cool because I had never been a part of something that big.

MM: We all have a better idea of how to work together having done this. I know what producers and directors do in this specific context of television and more commercial productions.

What was it like taking on multiple roles in the production?

LS: I think it worked out better because we got to communicate with each other more and take greater risks. You feel more invested. When I was watching it with my family, every two seconds I’d say something like, “I did that eye-liner!”

MM: The screenwriters on set ended up also doing set dressing, hair and make-up … It was great experience to be across all of that.

LS: It gives us something we can show employers. For them, watching a five-minute film would be so much easier than reading a 60-page script. And film is not meant to be experienced on the page. You’re finally seeing your work for the first time, how it’s meant to be consumed. And I had to make my dialogue even more snappy because the episode only goes for five minutes.

Why did you decide to apply for the BFA (Screenwriting) at the VCA?

LS: I come from a creative family, mostly musical, but also some writing and drawing. I would get into massive trouble in school because, instead of focussing on work, I’d be on my laptop writing fan fiction. As for the course, I didn’t apply for anything else. I wanted to get in – and I did.

MM: I didn’t have a cinema growing up in Mudgee, New South Wales. Because I was semi-isolated, film and television became the rest of the world. I didn’t want to do anything other than make movies. I didn’t want to be a solo writer and sit by myself for days working on a novel. I’d rather be in a collaborative space.

Winging It is part of a Faculty of Fine Arts and Music interdisciplinary collaboration. The project was funded through the Grace Marion Wilson Trust and VCA Foundation.

New episodes of Winging It will be released weekly from 18 January 2019.