UNESCO’s 2019 International Jazz Day will be presented this month in partnership with the Melbourne Conservatorium of Music. Head of Jazz and Improvisation Associate Professor Rob Vincs explains more.

Hi Rob, can you tell us about the upcoming partnership between the Melbourne Conservatorium of Music and the UNESCO International Jazz Day (30 April)?

This year we’ve been lucky enough to connect with UNESCO, who reached out and said they were hosting a large event for International Jazz Day, with Herbie Hancock as their patron. The Day was established in 2011 as a way of connecting people globally through the medium of jazz.

Historically, it’s always been very much part of jazz’s mission to reach out to other cultures, and Herbie Hancock, being the great jazz piano player he is, also has a history of being there with many of the original, most important jazz players of the 20th century – people like Miles Davis and Wayne Shorter – as well as leading his own bands. 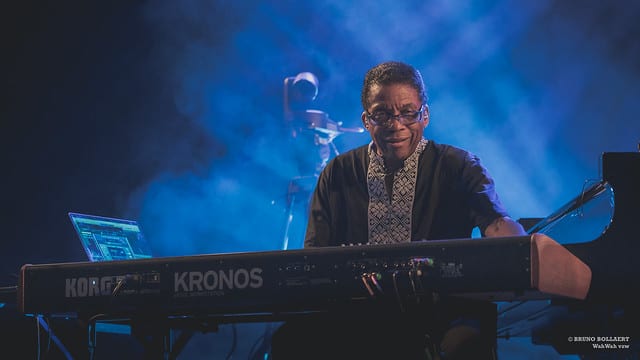 He’s always been a very important figure for us at the Melbourne Conservatorium – a musician who’s blended classical training with a colossal ability in improvisation and an ability to keep moving forward with projects such as Rockit and Future Music.

On April 29 and 30, we’re going to be hosting eight masterclasses with various fellows of the Herbie Hancock Institute of Jazz – artists such as Dee Dee Bridgewater, who’s a major vocalist. We will also have a panel discussion – Jazz, Improvisation and Aboriginal Languages – in which Indigenous issues are going to be discussed under the auspices of UNESCO. 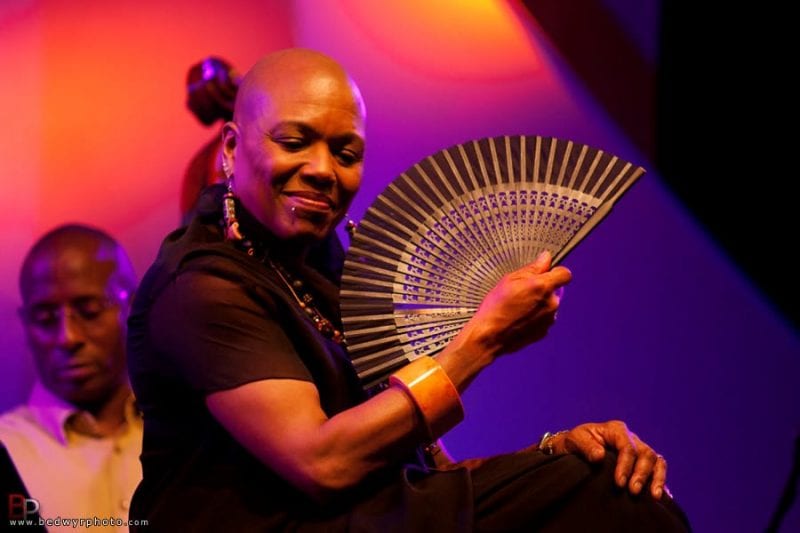 We hope our students will come away from the masterclasses with the sense that jazz is still a vitally creative force with the ability to connect inter-culturally, and that it doesn’t necessarily depend upon recreating what’s gone before.

Jazz is a term with just over 100 years of history, and it means a lot of different things to a lot of different people. It started with a mixture of African rhythms and western harmonies colliding – a multicultural infusion. And out of that, we get this feeling for jazz. Over the last century or so, we’ve seen the development of different styles of jazz. There’s beatbox, there’s big band jazz, acid jazz … It goes on and on.

How does this play out in the teaching of jazz at the Conservatorium?

At the Conservatorium, we build on that original idea of jazz – infusing different cultural elements – to see what’s possible. So, we know our jazz history but we’re also looking to what’s happening in improvisation in Indian classical music, in Korean music, and in different avant-garde practises in Europe.

In the 90s, there was a pervasive feeling that jazz was a heritage music to be faithfully recreated. But at the Conservatorium, we’re still exploring the intercultural aspects that were present right at the beginning and are still there now.

It keeps moving, it keeps shifting, it embraces what we’re doing in Australian culture. It embraces the future as well as the present, while respecting the past. It’s a worldwide movement. 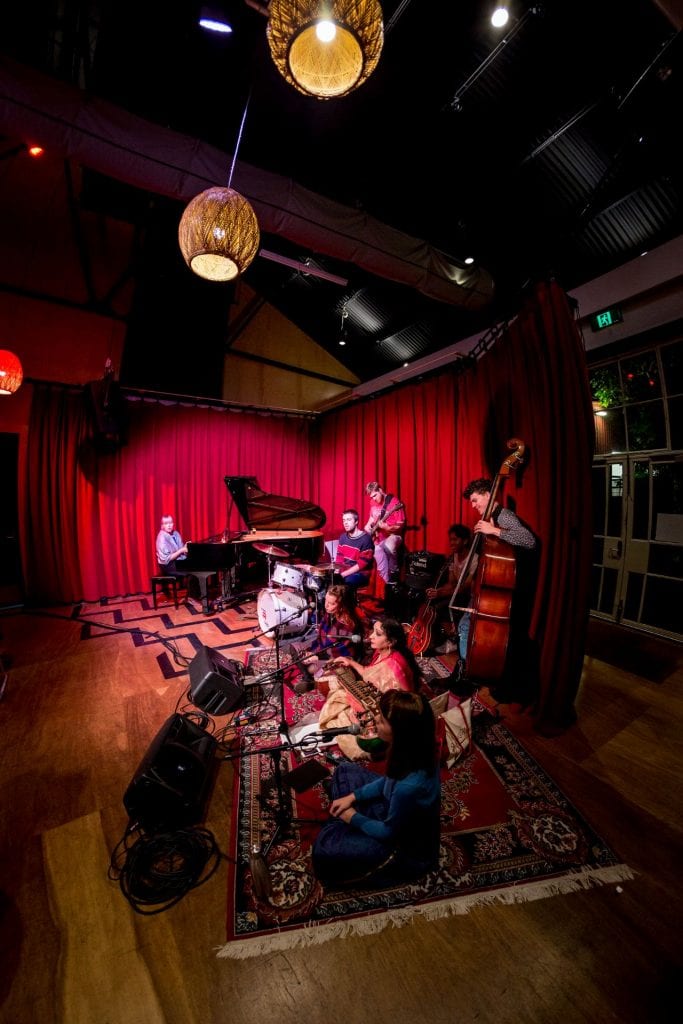 What kind of students – broadly speaking – benefit most from the Jazz and Improvisation course at the Melbourne Conservatorium?

Next year marks 40 years of our Jazz and Improvisation program, so we’ve seen a great many players come through our ranks.

Our course works really well for students who are keen to make their own music. For a lot of students out there, they take on board so many influences that you couldn’t necessarily categorise them as being indie pop or reggae musicians per se. But they share something – a calling to make their own music. Through the tools of jazz and improvisation, we really want to help people find their voice and make a contribution to the world of music. 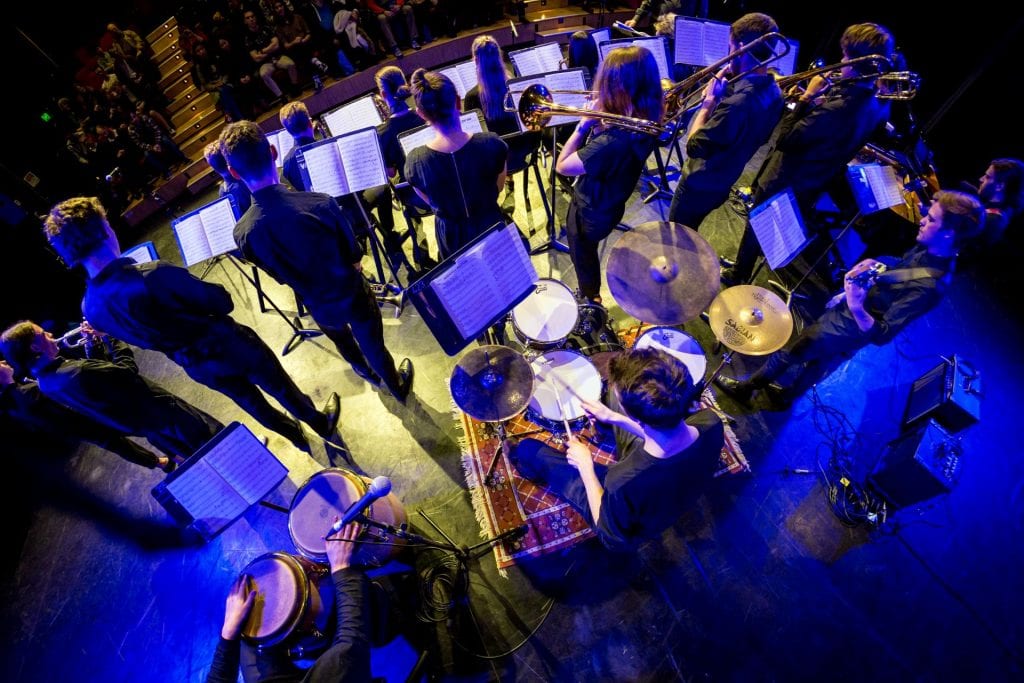 Can you give us a sense of the variety of music careers your graduates are enjoying?

We’ve got people playing straight up-and-down jazz in New York – individuals such as Nadje Noordhuis, an extraordinary trumpet player, who’s playing with the world-famous Maria Schneider band. We’ve got avant-garde players like Steve Heather and Will Guthrie in Amsterdam and Berlin, respectively.

We’ve got others, such as Ned Colette, who are making, more or less, indie pop music in a European style. We’ve got people on the Triple J charts, and we’ve got session musicians playing with other headline musicians. The current artistic and former artistic directors of Circus Oz studied with us. So, yes, everything from circus music to avant-garde to big-band to Triple J.

Is there something that distinguishes Melbourne-trained jazz musicians?

Yes, I think you can actually tell musicians that were Melbourne-based. I know that sounds weird, but if you did a blindfold test, you could tell the difference between Sydney musicians, Melbourne musicians, and those from the rest of the world. Maybe it’s an approach to harmony that … this is where everyone gets stuck – if you try to pinpoint what the difference actually is, it’s really hard – but you can hear it. A lot of our students are out performing every night in venues all across Melbourne, and that influences what they do. They’re not trying to recreate a particular style or heritage – they’re just making their own music in the best way they can, and that’s being informed by the venues they’re playing in.

One of the aspirations of International Jazz Day is to build on jazz’s “diplomatic role of uniting people in all corners of the globe”. Does this resonate with you?

Yeah, it does. A lot of the really great jazz happens in small, intimate venues, where people are very close to the musicians. Often, there are no music stands in the way – there’s just a really direct connection between audience and artist.

A couple of my mentors from the States have always impressed upon me that you’ve got to go out and talk to the audience during the breaks rather than heading backstage. Interacting with people in smaller venues in intimate ways is really part of the heritage of the music.

Jazz doesn’t really work in big stadiums – not because the music isn’t great but because every jazz musician I know just really likes that connection with people. And the closer they are, the better.