Director of the Margaret Lawrence Gallery Dr David Sequeira shares his thoughts about Yours Internally, an exhibition of work by Kiron Robinson and Grant Stevens showing from 27 July–25 August … and possibly gives the Backstreet Boys more poetic and artistic credit than they have enjoyed to date.

It’s probably not smart or even fashionable for a middle-aged curator to say he likes the music of the Backstreet Boys – but I do. There is something appealing about the lengths they go to in order to give their clean-cut looks a streetwise edge. I’m not sure they always succeeded in this endeavour, nor am I clear that we (the CD-buying public) were ever convinced by this illusion. However, we liked – no, we loved – this sanitised view of male, youth culture … and they could sing!

In the anthology 1001 songs you should hear before you die, the song Everybody (Backstreet’s Back) was described as “that rarest of things: a boy band cut that dudes could admit to liking, yet sweet enough to woo young ladies.”

The toughness of their announcement that “Backstreet’s back … all right” is destabilised by their concerns about their place within the hearts of their audience, as they ask, “Am I original? Am I the only one? Am I sexual? Am I everything you need?”

The genius of the song is the brilliant combination of self-doubting questions and confident thumping dance beats. Forgive me if I get too Dr Phil here, but I think we could truly identify with this unsettling dichotomy. The R&B/pop anthem went platinum and the album sold a staggering 14 million copies in the USA alone.

I have raised the structure of Everybody (Backstreet’s Back) in the context of the work of Kiron Robinson and Grant Stevens because I am curious about the pathos, sarcasm, tenderness, humour and vulnerability that underpins the apparent bravado of their imagery.

The ambiguity of words and the elusive nature of light are critical aspects of both artists’ work. In Yours Internally, each artist creates a heady blend of aura and text. Engagement with words in these works is an expansive process that begins by being immersed in their ambient glow.

The neon technology used by Kiron Robinson was originally devised for commercial advertising purposes in the 1920s. By the 1950s, London’s Piccadilly Circus and New York’s Times Square were known for their elaborate neon lighting displays but by the 1970s these were beginning to give way to fibre optic, LED and plasma technologies.

The current emergence of neon in advertising can be linked with a contemporary fascination with nostalgia, vintage objects and the discourse of craft beer, barbershops, beards, checked shirts, tattoos and Frankie magazine.

Robinson is acutely aware of these resonances. The absence of a “signature” font or colour creates a dynamic ambiguity. The audience is never clear who is speaking in Robinson’s works – are the words of the neon Don’t Forget Me those of the artist or the viewer? Is Robinson an observer or a participant? If I wear loud colours and boldly ask someone not to forget me, will they notice that I am trembling inside? 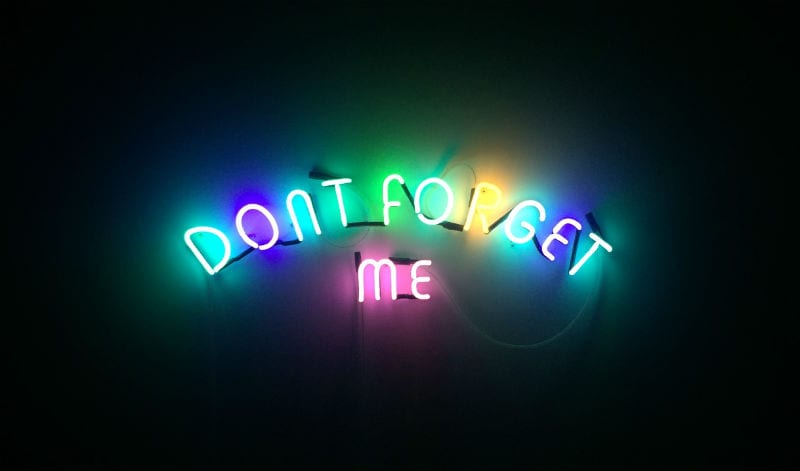 The titles of Robinson’s works – Fuck you 2018, Hello. You’ve made it 2015, Quiet Desperation2018, I tried 2005 and Don’t Forget Me 2012 – read like light bulb moments and point to an interest in the phenomenon of doubt. Often a crippling or destructive force that leads to procrastination and stagnation, the notion of doubt is rich and fertile terrain for Robinson – a generative multi-faceted theme that he expresses through illuminating statements, questions and proclamations.

Finding security within insecurity, his works make public the highly internal experiences of anxiety and uncertainty, the joyful brightness of the neon undermined by the melancholic discomfort of the text. Whilst these works can be understood as announcements of failure, thwarted intention and unfulfilled potential, they can also be read as profound expressions of humility in a time when cliché abounds. 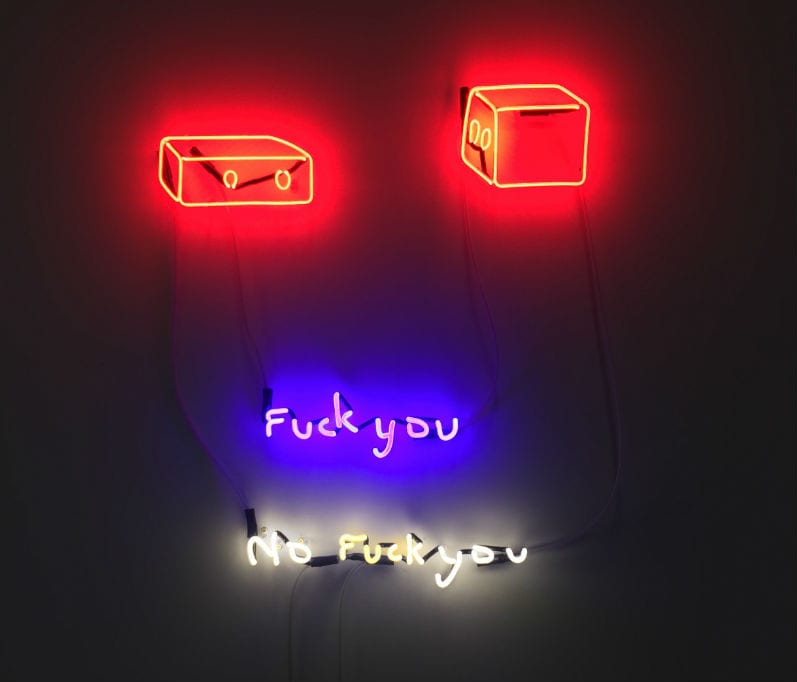 At some time during the last 10 years, it became commonplace to embellish Australian domestic interiors with philosophical tips and trigger words designed to evoke a sense of Zen and mysticism. Disguised as art (and drenched in a soundtrack of Smooth FM) these words of #inspiration remind us that we are #blessed, that we should be #thankful and #relax in our #home.

Often inscribed on distressed timber palings and blackboards, these words appear like pearls of wisdom rescued from a forgotten time of #calm, #comfort and #serenity. Er … #wtf? What happened? How did we come to depend on decorator homewares for succour? Part meditation and part screensaver, Grant Stevens’ videos explore and answer these questions.

Through large-scale projection, Stevens’ video works have an immersive quality that transforms the gallery space into an art house day spa. The treatment du jour? Exfoliation of the psyche. Whilst not necessarily critical of contemporary screen culture, Stevens’ work raises awareness of its pervasive influence.

In the earliest of Stevens’ four works in this exhibition, Really Really 2007, the text of a love letter drifts in a universe to a sweeping score of luscious piano arpeggios. Propelling cliché to dizzying heights, the work is literally a romance written in the stars: tacky and beautiful, eternal love in all its glory.

In other works, Thinking Feeling 2011 and Haven 2014, Stevens incorporates clouds, floating hazes of purple and blue, textual imagery that emerges and dissolves and tingling new-age soundscapes to suggest boundlessness. All of this is in direct contrast to his words which allude to self-imposed limitations and the need for affirmation.

In Happiness 2018, the screen is constantly sprinkled with “mantras and phrases borrowed from mindfulness meditation, corporate training, cognitive therapy, online dating, and job applications”. Stevens draws attention to the white noise of platitude and the banality of self-obsession. There is considerable emphasis on our preoccupation with feelings in Stevens’ works – a sense that our actions are somehow governed by or connected to how good or bad we feel. Standing in front of these works I am reminded that my electricity bill needs to be paid, regardless of my feelings about it.

I conclude this letter to you with a short summary of what I have learnt from this project:

I’m (we’re) pretty uptight and I (we) spend a lot of time pretending that I’m (we’re) not. The search for certainty is exhausting when in reality doubt and uncertainty is natural self-expression for me (us). How I (we) feel has little to do with being centred.

Dr David Sequeira is Director of the Margaret Lawrence Gallery, Victorian College of the Arts, the University of Melbourne.

Yours Internally is showing from 27 July–27 August, 12–5pm at the Margaret Lawrence Gallery, Southbank. More information.