Luke Devenish: how screenwriting pulses through The Heart of the Ritz

Luke Devenish is a novelist, screenwriter, playwright and lecturer who currently teaches Screenwriting at the Victorian College of the Arts. So how do all of those skills combine in his new novel, The Heart of the Ritz?

Hi Luke. Your new novel, The Heart of the Ritz, is set in France in 1940 and about four women who join forces to survive the Nazi occupation of Paris, with conviction, courage ... and style. Can you tell us a bit more about the book?

With pleasure. At the story’s centre is 16-year-old Polly Hartford, an Australian girl, who, following the death of her father, is brought halfway around the world to the care of her only remaining relative, her Aunt Marjorie, a former opera star, who lives in France. Marjorie has long been a positive influence in Polly’s life, but it’s a relationship based entirely upon letters. Polly discovers that the Marjorie of reality is somewhat different from the Marjorie of correspondence – her aunt keeps dangerous secrets. France is amidst the "Phony War" with Hitler’s Germany, which was the uneasy period before the conflict came to French soil, and Marjorie is involved in activities for the French Secret Service.

It is not too much of a spoiler to say that Marjorie comes to grief at the end of the first chapter, leaving Polly orphaned totally. It’s then that Marjorie’s three closest friends step in: Alexandrine, an elegant Comtesse; Lana Mae, a big-hearted American heiress; and Zita, a fabulous French film star. But there is more to these three godsends than Polly is privy to, for just like Marjorie, they are adept at keeping secrets, the biggest of which concerns the truth about Marjorie’s death. But grieving Polly remains in the dark about this … for now. 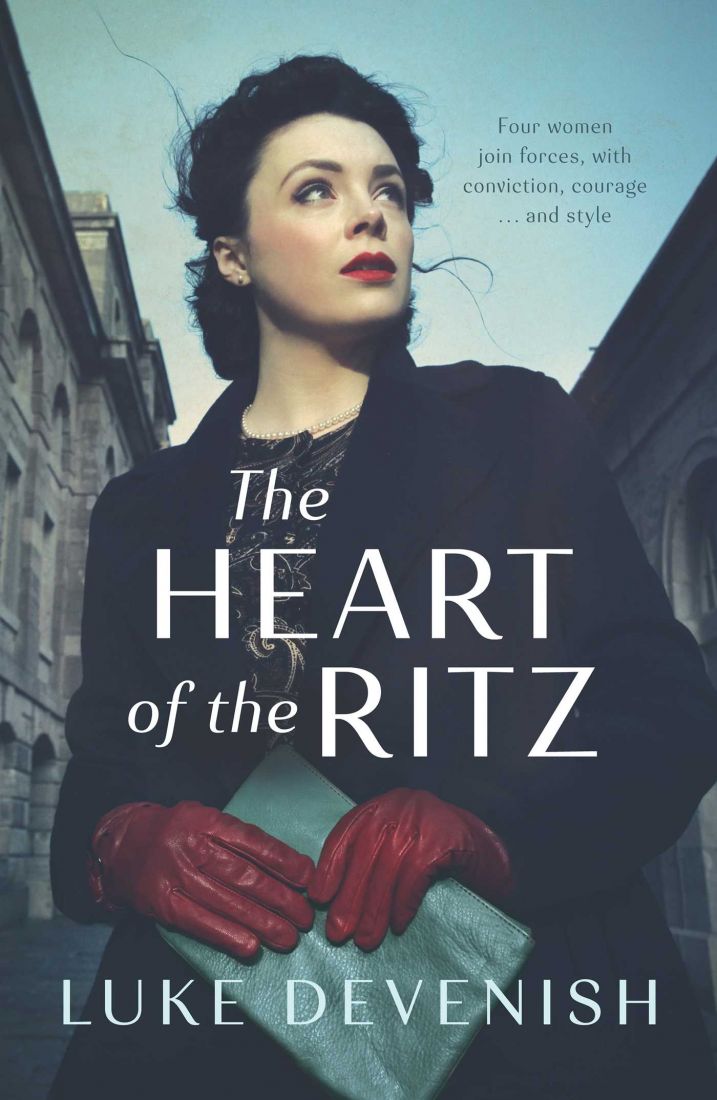 The three witty, wealthy, independent women take Polly under their collective wing and bring her to their home in Paris, the famous Hôtel Ritz, where Polly is introduced to an extraordinary lifestyle of glamour and privilege. But it’s a lifestyle propped up by delusion. The colourful denizens of the Ritz believe themselves insulated from the worsening war by money and position – a delusion that is shattered when the Nazis finally invade Paris in June 1940, and France falls to the Third Reich.

In the wake of this catastrophe, Polly and her guardians find themselves living side by side with some of Hitler’s most notorious henchmen. The Ritz becomes a Nazi playground, and the four women must draw upon all their resources of cunning and courage to keep their heads above treacherous waters. But from the depth of the decadence comes hope.

Remade as a young lady of money and style, Polly is dismissed as a fashionable featherhead of little threat to the Nazi occupiers. This provides her with unique opportunity. Joining forces with Tommy, a handsome hotel waiter with dangerous secrets of his own, Polly’s love for her lost aunt inspires her to perform acts of resistance, tiny to begin with, but growing in daring and impact. But as the Occupation draws on and Paris deteriorates, those with something to hide find the burden of doing so grows heavier and heavier. And for some of those in the fabulous Hôtel Ritz, being in possession of a secret proves fatal…

You’re a scriptwriter and playwright. How does this influence you while you’re working on a novel?

Well, my favourite thing to write is snappy, sparky dialogue, so there’s always plenty of that in my books. I’ll provide that in preference to writing lengthy descriptions any day. My characters like to have fun with what they say, and those in The Heart of the Ritz are no exception. Polly’s three guardians, Zita, Lana Mae, and Alexandrine, make weapons of their tongues and have lots of devastating lines. My publisher described them as a trio of Aunty Mames, and I think that captures them perfectly. They’re frequently funny, if I say so myself. And at times, heartbreaking.

I treat my novels just like screenplays: deliberately fast moving and vivid in detail. I aim for a vividness that is punchy. I try to give each scene an immediacy so that the reader feels as if they are right there in the moment with the characters. I resist the urge to skirt over things or do surface sprints across stretches of time – the novel equivalent of the montage.

It’s definitely easier to do the "skirting over" style of writing and plenty of bestselling novelists practice it, but I don’t let myself. This is my screenwriter’s discipline. I stick by the rule of entering a scene as late as I can and then exiting as early as I can, which is a way of identifying what’s most important to the scene and then milking it. My style is one of "cut tos", taking the reader from memorable moment to memorable moment, and in this way I can build steadily towards cliff-hangers, twists and pay-offs – which I love creating.

What’s your daily writing routine like and what are you working on at the moment?

I wish I could say I write every day, but a little thing called "life" tends to get in the way. I have my day job, but because it’s teaching screenwriting to university students, I still get to deal with characters and stories every day, which is wonderful because it keeps my creative brain very well oiled. The Heart of the Ritz was written during a dedicated period last year when I had the luxury of taking extended time off.

I’m researching my next novel now, which means I’m reading books, of course. The new story is still assembling itself, but I can tell you it’ll be set at the same time as The Heart of the Ritz, but across the Channel, in London. It won’t be a sequel, more a story in parallel. I’ve been joking to myself I’ll call it The Heart of the Blitz. I think my publishers might try to talk me out of that …

On your website you say you "write about people that history overlooks, be it because of their gender, their age, their class, or some other reason they have no control over". I love this. Tell us more about being drawn to these stories and characters.

As a gay man, I grew up with a firsthand understanding of what it is to be marginalised. It was no one’s fault, societal attitudes existed in the 70s and 80s that are much diminished now, and in a way I’m grateful for having lived through less enlightened times. The legacy of it is my keen empathy with others who suffer marginalisation – which is the experience of being disregarded and overlooked by the wider world.

I have such a fascination for history, but not for well-trodden stuff; I look for the stories behind the story. In doing so, it’s invariably obvious to me who the most marginalised people are in any given past period: women. This is why I’m so drawn to their stories, and most especially to those of women who triumph in spite of their marginalisation. But there are others to be found in this camp, too, so their stories also inspire me.

My first two novels, Den of Wolves and Nest of Vipers, were set in Ancient Rome, and focused not only on women, but also children and slaves, who were just as disempowered. My third novel, The Secret Heiress, set in late Victorian times, had girls of the servant class at its heart. And now with my fourth novel, it’s women who were dismissed as "fashion plates" – and gutsy teenagers, of course.

This is an edited extract of an interview first published on Better Reading. The Heart of the Ritz, by Luke Devenish, is published by Simon & Schuster.