Palawa and Wiradjuri theatremaker Nicola Ingram on why she makes theatre

Nicola Ingram is a proud Palawa and Wiradjuri woman from nipaluna, lutruwita (Hobart, Tasmania) and a 2021 graduate of the Bachelor of Fine Arts (Acting). Though now a passionate theatremaker, actor and writer, growing up Nicola had imagined she would work in politics. As a teenager, she did work experience with a couple of politicians in lutruwita.

“I realised that when you're a politician, you can't really say what you want. You have to toe party lines,” she says.

She decided to pursue the performing arts, where she would be able to express her views uninhibited.

The first trip Nicola made across the Strait was for a hockey game with her high school hockey team. The second was for a The 1975 concert. And the third trip was to audition for the Acting and Theatre programs at the Faculty of Fine Arts and Music, straight out of high school, at the age of 18. She progressed to the final round of interviews but was told to return when she had a little more life experience.

Nicola had met John Wayne Parsons, a former staff member of the Wilin Centre for Indigenous Arts and Cultural Development. She says that her connection to Wilin was one of the reasons it felt easy to return to audition for a second time.

“It wasn't daunting coming back the next time because everyone was so encouraging.”

“I came into the room and was just not really feeling it,” she said of her second audition.

Nicola stayed in contact with Wilin until her third audition. “When I came back to audition… I received a lot of support.”

John Wayne met Nicola on campus before her audition to help her find her way around. They made sure she had everything she needed, and even came into the audition with her, “which was a really big thing for me.” 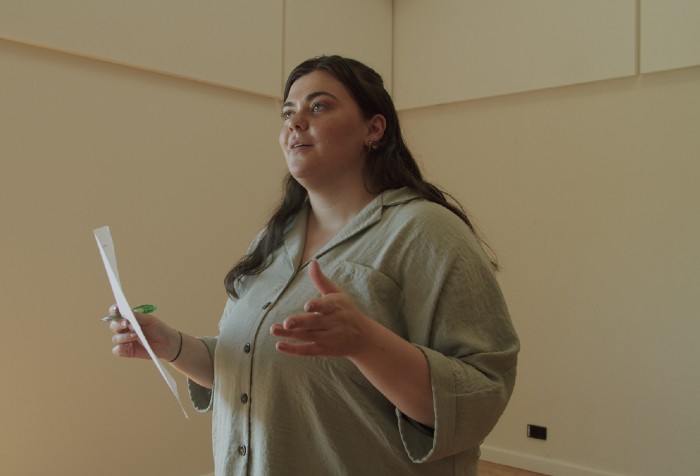 Nicola was accepted for the Bachelor of Fine Arts (Acting) in 2016.

“The energy of my final audition – I knew that I had it in the bag,” she says.

“I think it can be quite daunting as an Aboriginal student coming into Uni for your first time,” says Nicola.

“You get a bit worried that you might be asked questions and be expected to speak out on behalf of all mob, which can be really daunting and stressful,” she says.

Having the support of Wilin has helped Nicola to dissipate the stress and pressure of that experience.

“I think the support that you get from Wilin is – there's always a place to go,” she says.

“A lot of the time I need a bit of space in my work or I want to go to other mob to talk to them about the piece I'm creating, and have that social and cultural connection.”

The Wilin Centre is a central meeting place for students from across the disciplines.

“Wilin's always been a place where I can go in, get advice when I need it, or get somebody to look over something, and make sure it's all good.”

One of the highlights from her first year of study was an assignment that asked students to perform their favourite political speeches. She chose a speech by Stan Grant called “Racism is Destroying the Australian Dream”.

Another highlight was Fan The Flames, a collaboration of students and colleagues from Wilin who come together from across the art disciplines to put on a show. Nicola wrote and performed a poem for Fan The Flames “about the way that I see so-called Australia”.

Since graduating, Nicola continues to collaborate with artists she connected with through Wilin.

She speaks to a lot of different issues in her work, including accessibility and diversity, expressing frustrations about the racism that still exists in the industry with regards to First Nations actors. She has had casting experiences where the colour of her skin is openly discussed.

Nicola is using her art as a platform to challenge these attitudes.

“I am trying to break down those stereotypes of what mob look like and the stories that we bring,” she says.

She is interested in telling stories about growing up that are fun, comedic and political, but she also wants to resist the limitations that First Nations storytellers are under to have to always speak to the fact of their Aboriginality.

Since graduating from the VCA, she has been writing a lot. She is working at Murrup Barak, the Melbourne Institute for Indigenous Development at the University of Melbourne’s Parkville campus, with her old friend from Wilin, John Wayne Parsons. She is also currently undertaking a Master of Teaching, and hopes to supplement her theatre career teaching drama.

“Teaching will provide a bit more security and also be an opportunity to share my passion for theatre with other young people,” she says.

“I am passionate about creative work that empowers people to share their own stories, celebrating diversity and accessibility.”