Printmaker Adrian Kellett has been at the Victorian College of the Arts’ Print Workshop for 19 years – first as a Fine Arts student, and now as Print Workshop Coordinator. He takes Susanna Ling on a walk-through of the newly-refurbished Print Workshops, designed by Hatz Architects.

Until last year, we ran a very open plan print workshop in one big room at the Victorian College of the Arts. There were noise issues when we tried to run two classes concurrently – ventilation, extraction, and machinery noise, as well as teaching noise. One of the concerns in building the new workshop was making spaces in which we could lead multiple classes at the same time.

We decided to create three separate main rooms: an etching-based workshop, a lithographic-based print workshop, and a new screenprinting workshop, which we hadn’t run here since the mid-1990s. One of the greatest assets in the redesign is the ability to manipulate the space. Each workshop is defined by new glass walls, allowing us to block off one space and still access the others. This means we can run evening classes in one, for example, while still allowing students access to the other spaces to work.

The place used to be sweltering in summer and freezing in winter, but we’ve got heating and cooling now, which is going to be a lot more friendly come the bad weather. 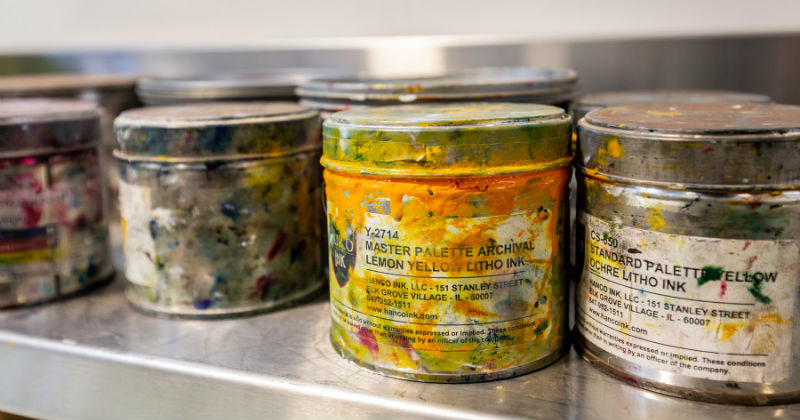 Our etching workshop is set up with three manual-driven etching presses, and a hydraulic press at the back. The processing benches run down the northern side, and our ink area down the southern side. We run a very low-toxic workshop these days, but we’re also set up with more than enough ventilation, should we need it. The floor is concrete – a definite upgrade from the old rickety wooden floor, which had a lot of charm but was difficult to clean. 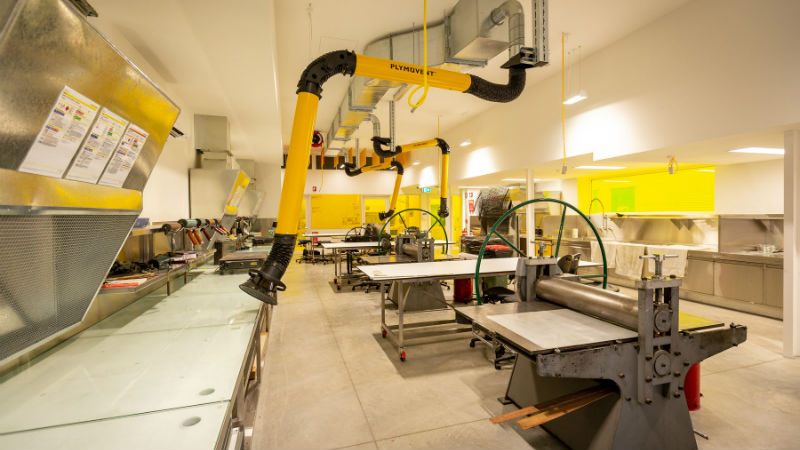 Our lithographic workshop is essentially a mirror image of the etching workshop. It has three manual direct lithographic presses, a long inking bench, and ventilation. 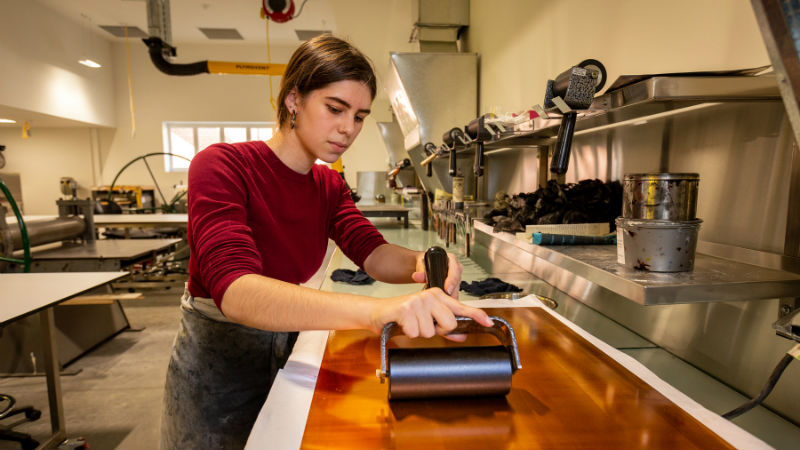 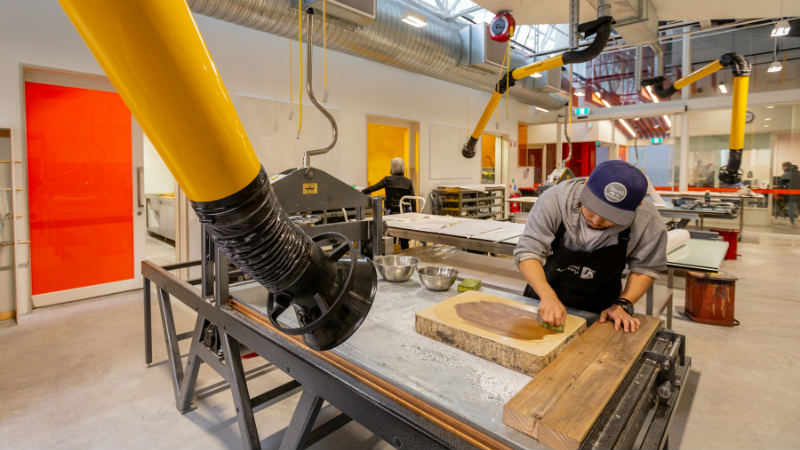 Our screenprinting workshop has been designed a little differently. There’s a big accessible workbench down the middle, and the idea is to have an even flow through the space. The processing rooms are all connected and separated from the main printing space to eliminate light infiltration and noise. This allows the user to go through the south door into a coating room which leads to an exposure room and a washout room before heading back into the main space to start printing. 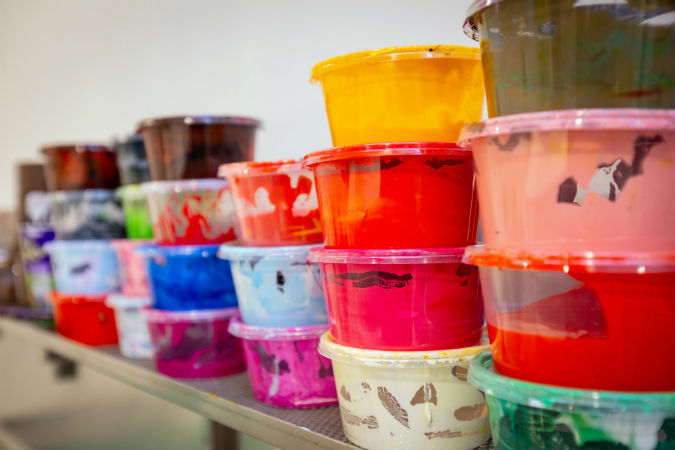 As well as the three main workshop spaces, we’ve also been able to accommodate six processing rooms. We now have facilities for photographic plate making, plate graining, and stone graining on the same footprint. Previously these processes had to be done in different buildings – so now it’s much easier in terms of running classes. We also have a smoke room for preparing ground etching plates, a corrosive room for etching intaglio plates, and a spray booth for aquatinting and other processes.

When we did the risk assessments of the workshop for the redesign, we decided to supersede a process called rosin aquatinting and substitute it with a safer, spray, alternative. That makes for a much safer environment. 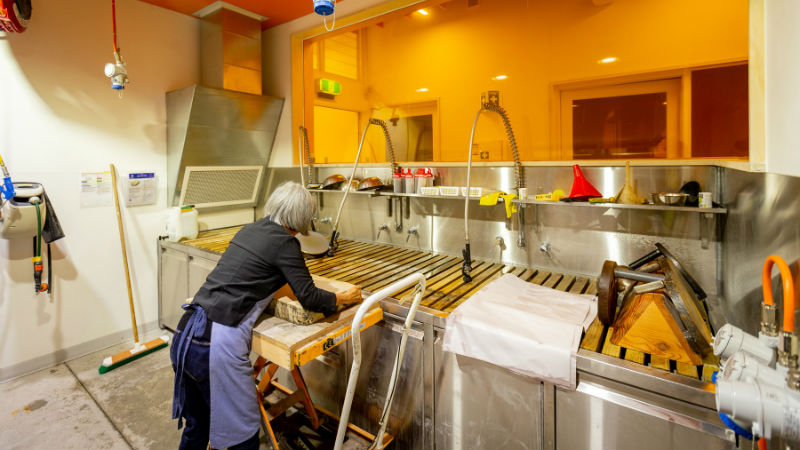 Safety is a key concern in the workshop. In the unlikely event that someone ends up at the wrong end of a chemical spill, each workshop is equipped with an emergency eyewash system, and we have two emergency showers. Supervision was also a key consideration in the redesign, because of the potential risks in operating the print machinery.

From my office, I can see into each of the workshops, so students are supervised at all times. Next year will be my 20th year here, so I’ve seen a lot of change in my time, but I never thought I’d see anything like this – there’s nothing internally that’s remained from the original space. It’s totally changed the way we work because everything’s purpose-built, everything has a place to go, and it’s all built around the way we teach. We couldn’t be happier with the rebuild. 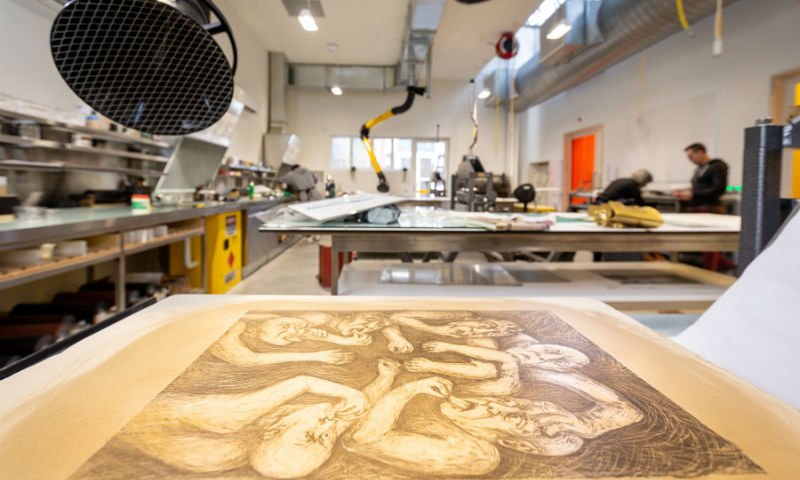