Ablaze: Tiriki Onus resurfaces vital Indigenous history through a film about his grandfather

Academic, advocate, singer and now filmmaker, Tiriki Onus discusses the film made by his grandfather William "Bill" Onus and the new documentary it inspired.

Finding old family photographs in a suitcase is fairly common – almost infinitely less so that one of those pictures, combined with footage unearthed by a filmmaker, would lead to a feature-length documentary that tells the story of a key figure in Australian history.

Such was the case for Tiriki Onus, a Yorta Yorta man, opera singer, artist and Head of the Wilin Centre for Indigenous Arts and Cultural Development at the University of Melbourne, whose film Ablaze, already touted as a program highlight, will premiere at the Melbourne International Film Festival this month.

More than six years in the making, and something of a detective story, the seed for the documentary was planted when filmmaker Alec Morgan contacted Onus with a strong hunch that a nine-minute black-and-white silent film he’d discovered at the National Film and Sound Archive in a tin labelled “Aborigines in the Community” was made by Onus’ grandfather, William “Bill” Onus, a Yorta Yorta/ Wiradjuri entrepreneur, boomerang champion, theatre empresario and political activist, who became the first Indigenous president of the Aborigines Advancement League in 1967, playing a key role that same year in the referendum that allowed for Indigenous people to be included in the census.

For Onus, the timing of Morgan’s phone call was surreal. “I'd just been lecturing to a group of students about one of Alec's earliest films, Lousy Little Sixpence, from 1983,” he says. “We’d been discussing how a non-Indigenous filmmaker coming into Aboriginal communities and basically saying ‘What stories do you want to tell?’ was as a good example of inter-cultural collaboration.

“About half an hour later, I got a call out of the blue from Alec, who introduced himself and said, ‘Do you know your grandfather was the first Aboriginal filmmaker? I've found this film in the archives that I believe he made. Can I come down to Melbourne to show it to you?’”

The find was made all the more remarkable by the fact the vast majority of films shot by Bill were lost in a caravan fire in the 1960s. The near-confirmation of the film’s provenance, made more certain by the cross-checking of old family photographs Onus had looked at many times without realising their significance, led to the pair working on the documentary that would eventually become Ablaze. 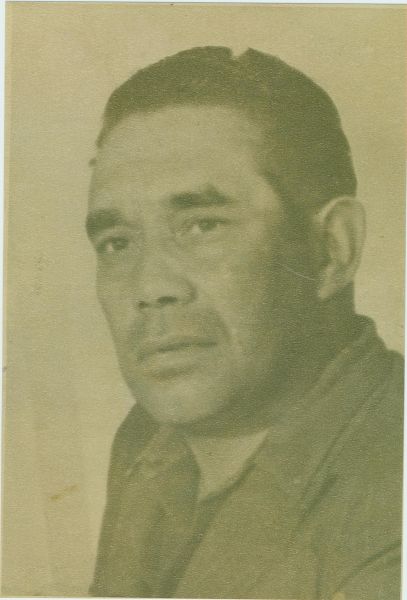 In the absence of any supporting material or sound (they later discovered a voiceover had been recorded by Bill but was lost) it was initially tricky to date the film.

“In the end, we were able to date parts of it to an exact month in 1946,” Onus says. “There’s footage of Captain Reg Saunders, the highest-ranking Aboriginal serviceman, working on the trams as a conductor after the Second World War. He only did that for a very short period because the racism was too much, but behind him, on the tram, is a poster advertising the film The Hard Way, which we found out was playing for a short time in Melbourne in 1946.”

From there, they were able to locate the records that would allow them to date, and better understand, intriguing footage of a theatre show that features in Bill’s film.

“Bill had worked long and hard to challenge the neck-chaining of Aboriginal people in Western Australia, and that’s one of the things being depicted in the performance,” Onus says. “It also shows people having rations withheld and women being abducted. And then, two non-Indigenous figures come on stage and dance along with the other actors, and there's a judge and a court case being played out.

“We discovered this production was put on as a collaboration between the Australian Aborigines' League, of which Bill later became president, and the New Theatre, a socialist worker's theatre in Melbourne, in support of the Pilbara Strike in Western Australia, which began in 1946.

The strike, which saw Aboriginal workers walk off pastoral stations in Western Australia to demand independence alongside better human rights, wages and working conditions, inspired the broader campaign for Aboriginal rights, of which Bill was very much a part. In a tragicomic twist, the research for Ablaze was made easier by Australian intelligence operatives, who for some time had kept Bill (and many other activists) in their sights, his determination to keep Koori culture alive seen as a clear and present danger to non-Indigenous Australia.

“We were very fortunate that ASIO and, before them, the Commonwealth Investigation Branch were very good at keeping records of the things Bill and others were doing,” Onus says. “We're also really fortunate that ASIO started using movie cameras to record people and all of that footage is now in the public domain, which in so many ways is a wonderful testament to the work that Bill and others were doing.

“The humour and irony isn’t lost on me that, in doing so, ASIO actually created resources which are now empowering First Nations communities in reclaiming our culture, exercising our sovereignty and being self-determined. It's a wonderful turnaround after all those years that they’re now able to supply us with resources to keep this work moving forward.”

In Ablaze, Onus and Morgan travel to the Pilbara to show the film to descendants of the Pilbara Strike. In doing so, and in line with the documentary’s approach overall, Onus was keen to stress that Bill was no one-man show.

“We wanted to create space for other voices to come in,” he says, "to be able to acknowledge the collaboration, the multiple voices that were coming together at that time. I think we can get very, very passionate about thinking of someone as ‘the one’, or ‘the first’, seeing people as standing alone in a space. That doesn’t really interest me hugely because there's something much more empowering, to me, in thinking about how a body of people come together, thinking about what collaboration across cultures looks like, and you can see that all through this film.” 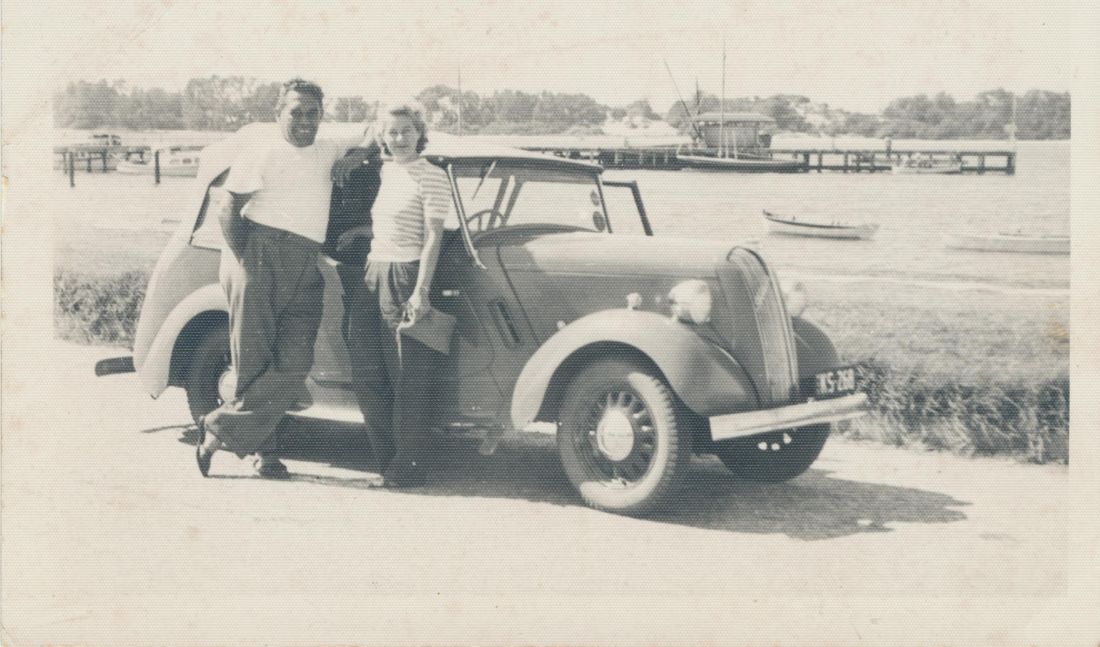 Observing theatre and film being used in such a powerful way by his grandfather has had a significant impact on Onus. “It’s made me feel good about the career and life choices that I've made to be in the space that I'm in now, too.”

Indeed, the arts and their transformative potential form something of a through-line in Onus’s family – in his own case, he blends being a performer, visual artist and filmmaker with being a senior academic and advocate for Indigenous students in the arts. His father, Lin Onus, was a celebrated painter, sculptor, and printmaker. His grandfather, Bill, in addition to his many other talents, set up a business called Aboriginal Enterprises in Melbourne in the 1950s, making items that showcased Indigenous designs. 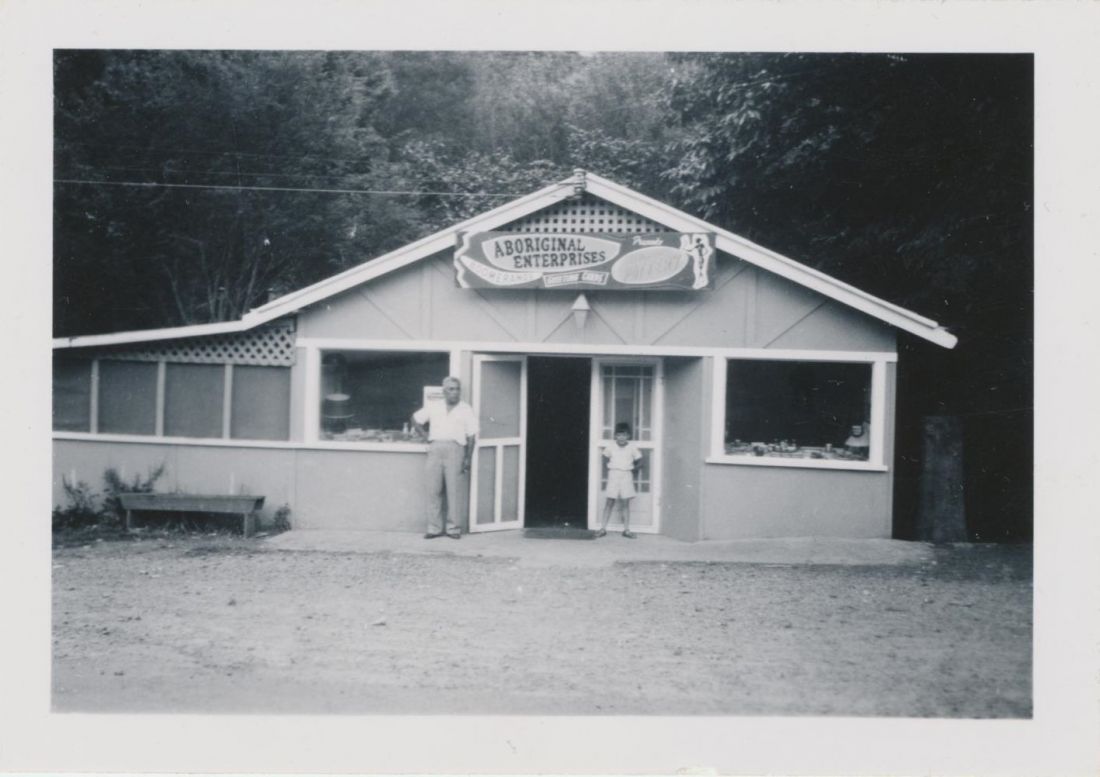 Beyond art for art’s sake, Onus appreciates the role of art in protecting and promoting Indigenous culture both now and in the past.

“It’s interesting that a lot of the work Bill and his contemporaries were doing in the early and middle part of the 20th century in cultural reclamation was about finding smart and innovative ways to practise culture and tell stories,” he says. “For a lot of that time, across a lot of Australia, it was illegal for people to speak their language, to engage in ceremony and dance. Oftentimes, they weren’t even allowed to fraternise with their own family members.

“But when you did all those things on a stage and called it a performance, you could get away with it. So, much of the cultural reclamation and revival of that time was happening within the public gaze – or hiding in plain sight, if you will. Because, while people didn’t necessarily want Aboriginal people having access to this knowledge, there was still a huge ethnographic curiosity in Aboriginal people and a fetishisation of the culture.” 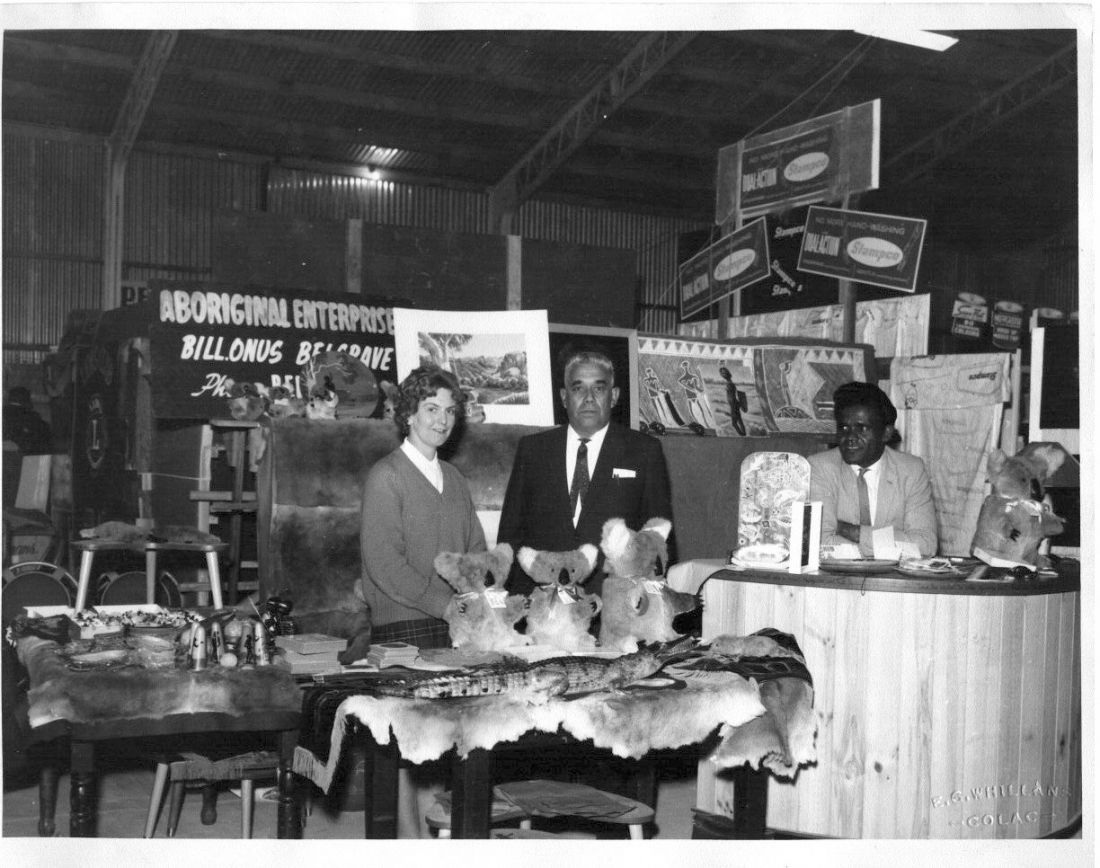 Poignantly, and pointedly, Ablaze shows Onus wrapping his first-born daughter, Ninda, in a possum skin cloak he has made, and onto which he has inscribed elements of Bill’s story.

“For a long time, people weren't allowed to make possum-skin cloaks,” he says. “But the aspiration to make our cloaks again formed the basis of a story that Bill told my father, Lin, who then told it to me. And after three generations of being promised that we would once again make our cloaks, I finally did. And the first one I completed is the one I wrap around Ninda in the film.” 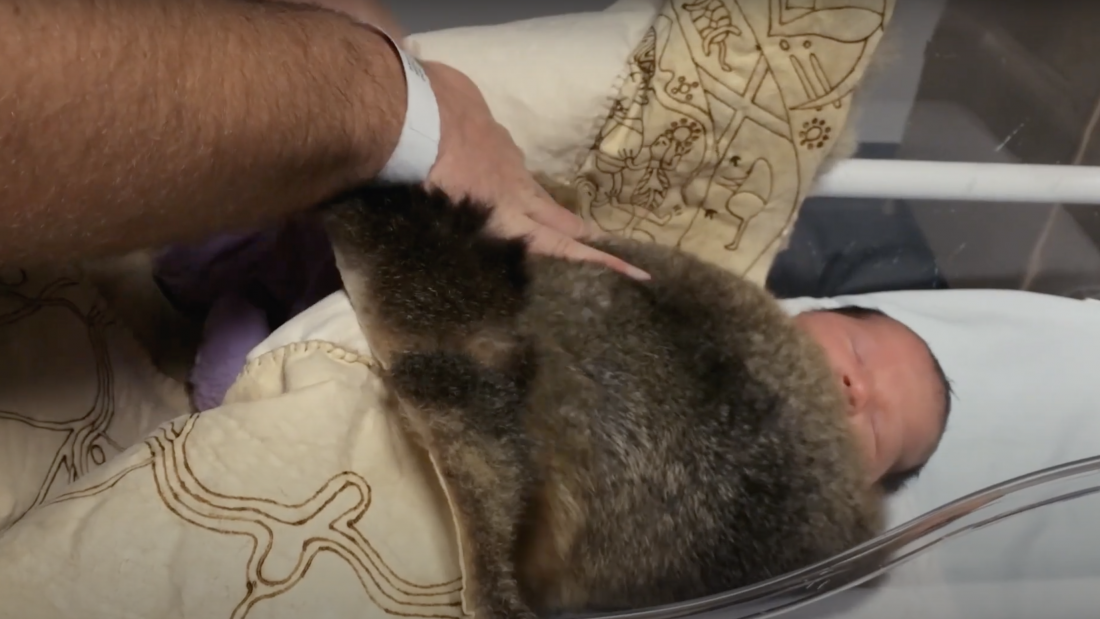 I wonder if Onus feels more of a connection to Bill, who died 12 years before he was born, having made the film.

“In many ways it's been a reaffirmation for me of things I've always believed,” he says. “I've always felt that I'm living quite closely to Bill, quite apart from the physical comparisons that are always made between him and me by aunties and others who tell me I look a lot like him, or that I have the same stride.

"But as we’ve dug deeper, and as I've found more of his own voice in things, it's been incredibly heartening to see the parallels to the types of things that I say now. At the same time, it can be frustrating to see that many of the things Bill was saying 70 years ago are still things that we say now.” 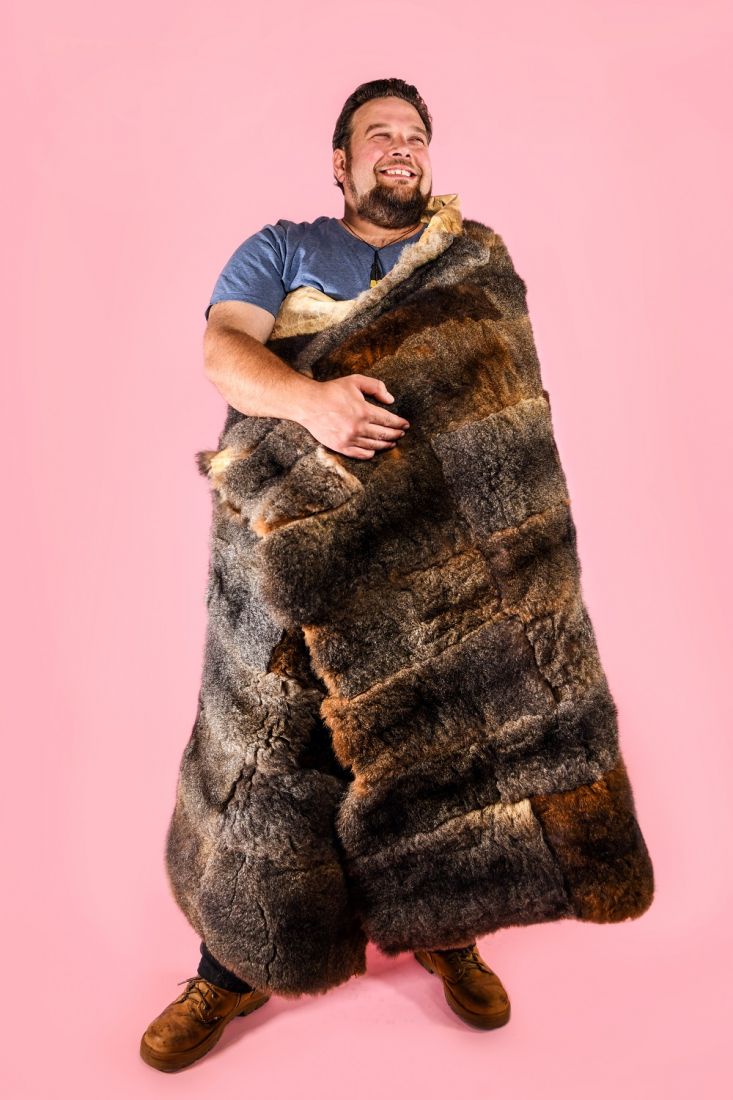 During their research for Ablaze, Onus and Morgan discovered that Bill’s film had secured a distributor for cinema release only to be suppressed and never shown. Which makes it hard not to also wonder, and feel touched by, what Bill might have made of the fact that it would finally be watched in cinemas as part of a documentary made by his grandson some 70 years later.

“There's something quite lovely about being able to bring that story to the world finally,” Onus says. “And in many ways, I think Ablaze is a great embodiment of the type of cultural reclamation Bill and others were engaged in, and the type of work I’ve tried to continue to do, this idea that stories never go away. They’re not pushed out of the world – they’re still out there and we just need to create space to be able to embrace them. I think that’s borne out by this film.”

Beyond hoping that Ablaze resonates with audiences, Onus would like it to help more stories to resurface.

“I hope it spurs people to ask questions about what they've missed out on,” he says, “living here, enjoying the benefits of this country and our communities, but at the same time wondering about the stories we could have been telling had all of us collectively, black, white, brindle, wherever we're from, had the opportunity to engage more deeply.

Ablaze will premiere at the Melbourne International Film Festival on 17 August 2021. Tiriki Onus also appeared the festival as part of MIFF Talks - Family Affair: Filmmakers Share Their Lives, presented online on 6 August. The University of Melbourne is the proud partner of MIFF Talks 2021.