Directed by VCA alum Ben Chessell, Sian Davies and Charlotte George, with cinematography by alum Katie Milwright, Surviving Summer  has already been a Netflix hit since it was released on June 3. We spoke to Producer Joanna Werner, Set-up Director Ben Chessell, and Director of Photography (DoP) Katie Milwright about the series ahead of its premiere.

Ben Chessell, Katie Milwright and Joanna Werner have worked together for the better part of two decades. Their first project together was in 2003, Heartworm, a short written by Chessell. In 2005, they went on to  make a short feature for SBS called Heartbreak Tour, again with Milwright as DoP, Chessell as writer/director and Werner as producer.

While all of them have continued to have exciting intertwining careers in the industry, Surviving Summer is the first TV series they’ve worked on together. And the strength of their collaboration is reflected in the show’s popularity, which is currently the fourth most popular show trending on Netflix.

The protagonist of Surviving Summer is American teenager Summer Torres (Sky Katz), whose mother is Australian. After being expelled from an elite New York high school for the second time, she is sent to Australia to stay with her mother’s old friends the Gibsons. Summer lives in the Gibson family home on the Great Ocean Road and becomes entwined in the life of their son Ari (Kai Lewins), who is trying to make it to the state surfing team. Summer arrives like a tornado ripping through their family life, while falling in love with the town, the people, surfing, and Ari.

“It's all about teens finding themselves and finding their friendship groups and finding what motivates them, in the beautiful surrounds of the Great Ocean Road,” says Werner. Surviving Summer was shot between Anglesea and Aireys Inlet on the Great Ocean Road, and set up its production office at the Anglesea Surf Lifesaving Club. Shooting on the beach is beautiful, but with incredibly varied conditions, difficult.

“They say filming with kids and animals is hard, but filming around tides and wave conditions is really tricky,” says Werner.

Director Ben Chessell recalls a moment that he took the crew to location to shoot a scene on the beach at high tide.

“We crested the cliff and looked down, and there was just water all the way up to the bottom of the stairs and no location whatsoever. I thought, ‘ah shit… we didn't think of that.’”

As set-up director, it was Chessell’s role to develop the style of the show alongside Werner and Milwright. This style was adopted by block directors Sian Davies who, like Chessell, directed five episodes and Charlotte George who received her first Australian credit for episode four.

Shooting with the tides

The team was determined to capture fantastic surfing and had a full-time surf unit on hand for eight weeks. As the schedule and surf allowed, different actors would hit the waves with their professional surf doubles.

Shooting in the water comes with its own set of challenges.

“You have to take into account wave conditions because even at world class surf beaches like Torquay and Bells Beach, the surf is good… but not every day,” says Chessell.

There are sequences in Surviving Summer involving characters in a surf competition, and other characters on the beach watching them. Some of those sequences had to be shot across multiple locations, on three different days, with varying weather and oceanic conditions — a nightmare for continuity. 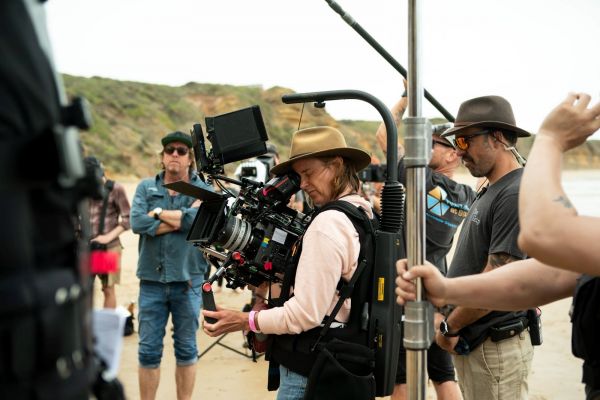 “It was an interesting challenge to invent ways of being able to work quickly and efficiently,” says DoP Katie Milwright.

With at least half of the production set on the beach, negotiating the best shooting time for location while also factoring  in tide times, made the production, as Milwright says “like a jigsaw puzzle.”

But the payoff was great and Surviving Summer has hit the scene as an iconic beach drama.

While there are many iconic Australian dramas filmed at the beach, including Home and Away and Puberty Blues, the Surviving Summer team was particularly excited to have the opportunity to show off the Great Ocean Road in all of its rugged, cold beauty.

“Teen television is incredibly popular around the world,” says Werner.

“This is going out on Netflix worldwide to 190 countries everywhere… We want it to really stand out and be distinctive, and show this amazing location,” she says.

“We brought really high production values and Katie and Ben did such a beautiful job at making it grounded and real, but also aspirational and beautiful.”

Milwright describes the aesthetic of the show as “sun bleached”.

“We wanted to really tell the story from the perspective of the teenagers and really be in their experience of the world,” she elaborated.

With Surviving Summer popping off on Netflix, Chessell and Milwright are deep in their next collaboration; a noir comedy series for Amazon Prime written by comedy duo Kate McCartney and Kate McLennan called Deadloch.

They are proving themselves a force in the Australian TV scene. Ben Chessel completed a Diploma of Directing and a Master of Screenwriting, and Katie Milwright studied a Bachelor of Fine Arts (Film and TV) at the Victorian College of the Arts.