VCA Dance – on board with the Travelling Dance Studio in Berlin

Some 22 VCA Dance students recently took part in the annual Travelling Dance Studio program in France and Germany, honing their knowledge and skills in ways that will benefit them in Australia.

The second-floor windows are open at the Tanzfabrik Centre for Contemporary Dance in Berlin, where 22 VCA Dance second- and third-year students are limbering up in the face of 35-degree early afternoon heat.

Choreographer Ayman Harper, their teacher for the day’s workshop, asks them to stand in a circle, to work together, passing an imaginary ball to each other, changing direction when they feel like it, eliminating those who miss their cue. The group is in last days of this year’s Travelling Dance Studio, an intensive, three-week study-abroad subject, which has seen them attend dance performances, as well as practising and participating in dance events in France and Germany.

“OK, and now we’ll come to the front,” says Harper. “Let’s run through some of the movement from yesterday. Does everyone remember the moves?” The dancers fall in line, shake their legs and arms out, ready to go. Harper starts the music, the students begin dancing, stops the music, they stop, start again, move on to the next piece of what looks like an elaborate puzzle.

I catch up with Harper during the first short break of the session.

Harper, a Berlin-based freelance dance teacher, has been working with the VCA periodically since meeting and forming a bond with Head of VCA Dance Jenny Kinder during a workshop in Melbourne in 2016, when he realised that his own approach, and that of the VCA, just “gelled”.

“There seems to be a lot of similar approaches and interests, as well as similar ideas we’re working on,” he says. “ Each time I’ve worked with the VCA it strikes me that the College nurtures dancers who are cultivating their identity artistically as well as individually.”

In recent days, he has been teaching the VCA dancers repertoire by the renowned American dancer and choreographer William Forsythe, with whom he used to dance, and many others. 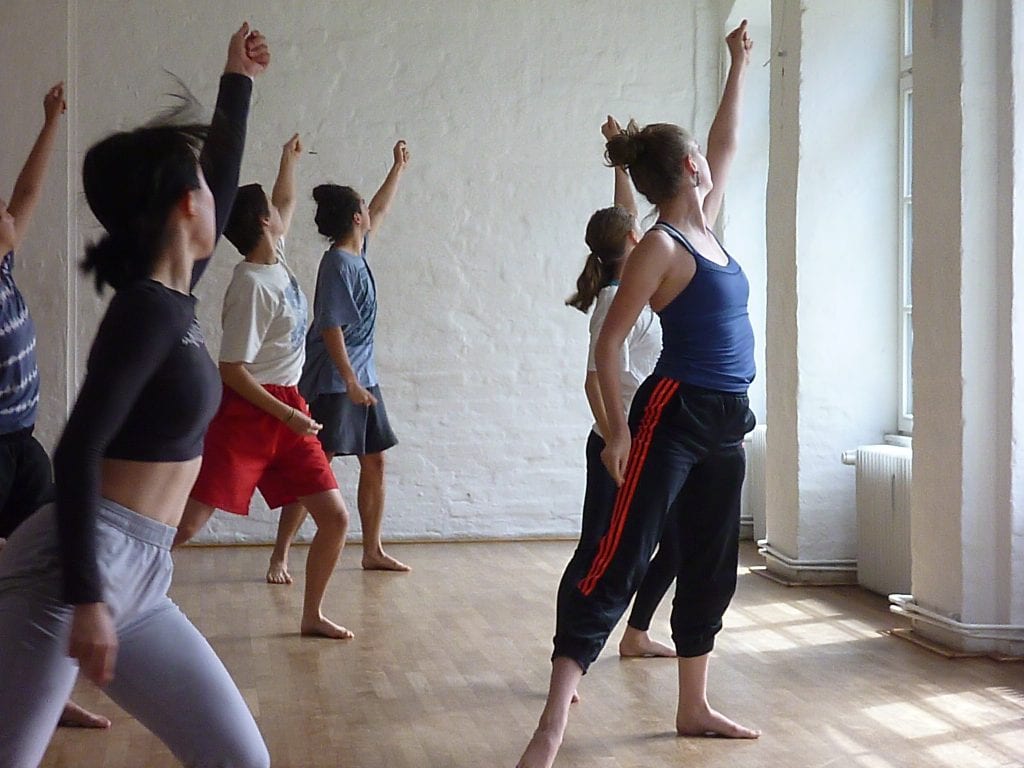 “Another unique aspect of VCA Dance is the variation of interests among the students,” he says. “Some of the dancers here are really keen to work on movement, and virtuosic technique. Others are more interested in conceptual dance and choreography. Because of that, I’ve been approaching each day differently, with different lenses on.

“Today we’re addressing some mechanics, and how to achieve speed through relaxation, because ultimately speed comes from a state of total relaxation. That’s something I’ve learned from my tap education … I’m sorry,” he says, “excuse me”.

He returns to the front of the studio, addresses the students, who are back on their feet, relaxed and ready – starts the routine, stops, starts. The students produce the same move faster and faster until it begins to falls apart.

“You can’t tense and engage your muscles when you want to achieve this kind of speed,” he says to the group. “I know it feels like you should be doing that but it’s actually counterproductive.” 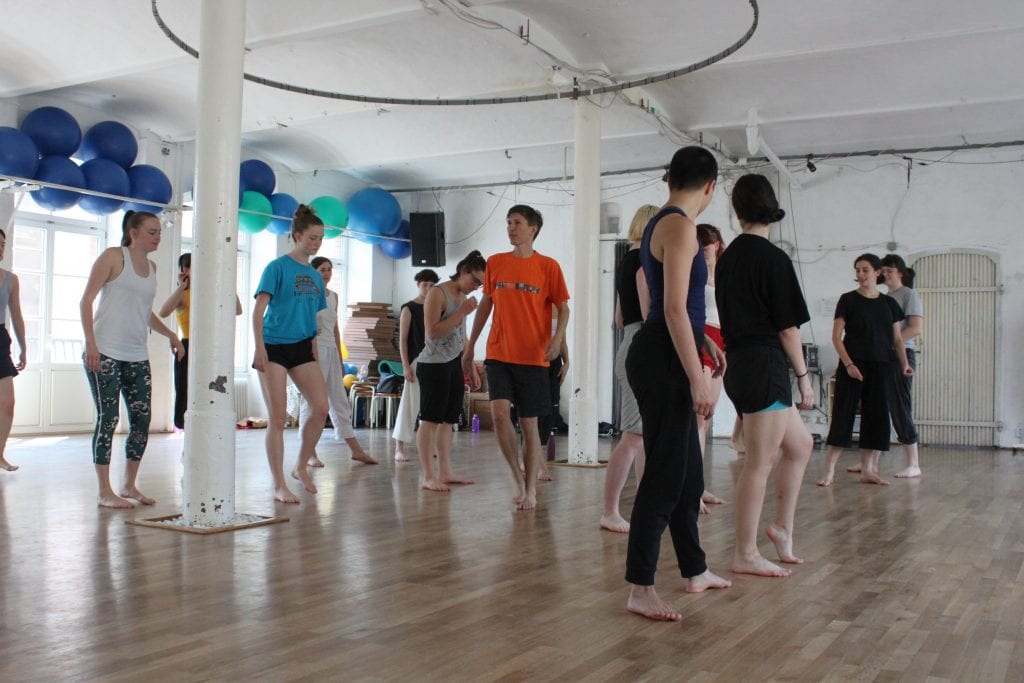 Watching over the workshop is VCA Lecturer in Dance Anna Smith, who is on her fifth Travelling Dance Studio with the students. This one, she says, has been the busiest so far.

“We started off in Paris at the Centre National de la Danse,” she says .”The students took classes alongside students from international institutions from all around Europe, the US and Asia. We’ve been to see shows and performances in the evening, sometimes two or three in a row, we’ve been at symposiums. It’s as much about what goes on outside the studio as what we do within.” 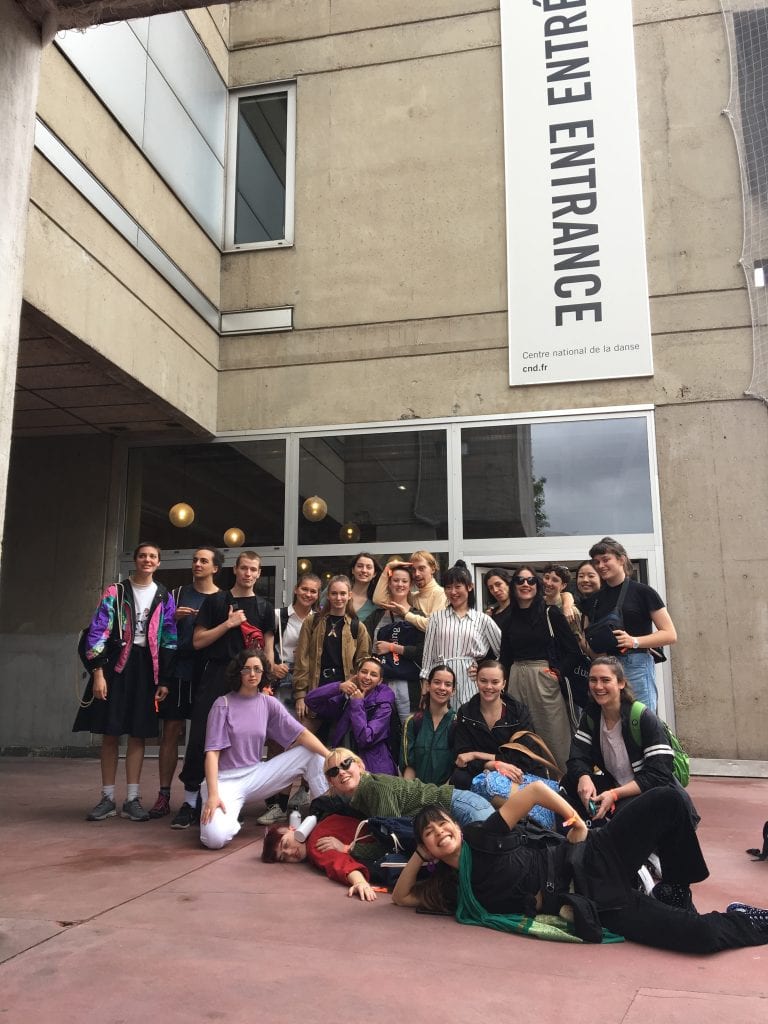 The workshops, she says, are just one part of the social and cultural experience the Travelling Dance Studio was created to cultivate.

“Being in cities such as Berlin or Paris is just invaluable. It takes the dancers out of their comfort zone and when they return to Australia they bring with them a broader outlook in class and in their choreography.”

Overseeing train tickets, accommodation and issues that crop up with such a large group of students is always challenging, she says, but such concerns are outweighed by the positives for students and staff alike. 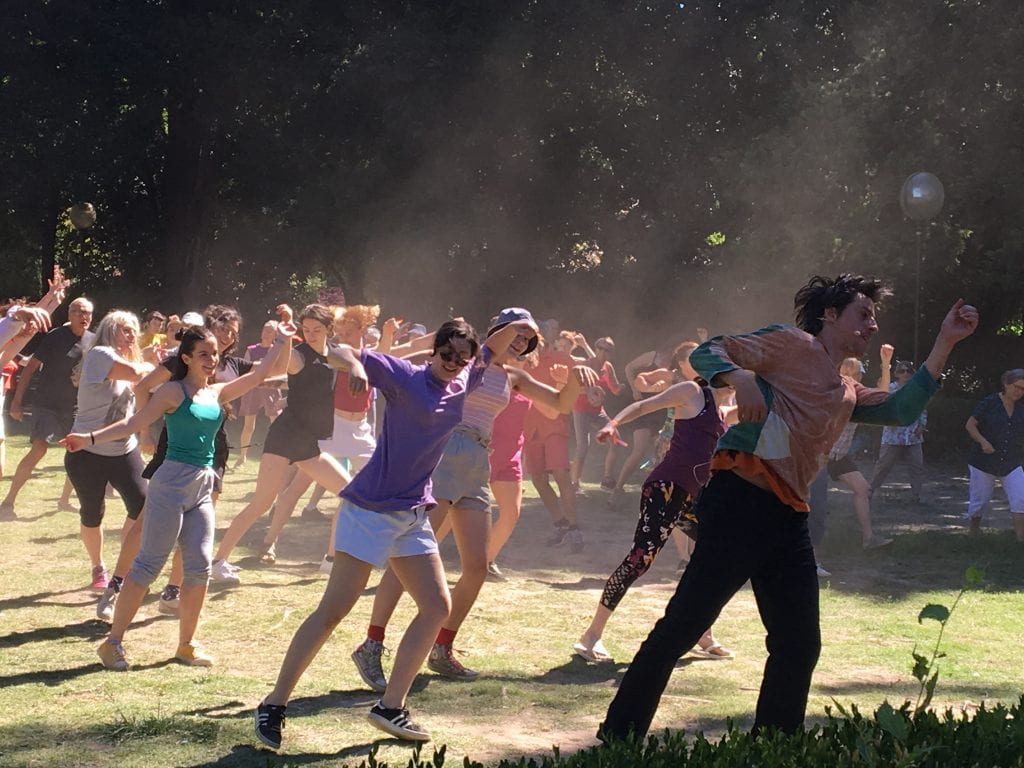 “On a trip like this, there’s a lot of professional development for me too,” she says. “Our aim is always to expose the students to the heart of contemporary dance – which obviously benefits me as a dance professional. When I’m back in Melbourne reading the students’ reflective papers on the experience, I really get a sense that they’ve been enlivened and enriched.

“They see new possibilities for the future. They see dance as being broader than just Melbourne and Australia and they’re excited about things that they want to go and pursue.”

Head of VCA Dance Jenny Kinder, who established the Travelling Dance Studio in 2014, says the program has been a huge success. “In my time as Head, we’ve embedded a number of aspects to the degree program that have been helpful to the dancers’ development, and one of those is the Travelling Dance Studio. Some 90% of our students choose to do it, and it becomes very formative in what they then choose to focus on professionally.

“They see a lot of things they like, and others they dislike, and that can lead to them having a stronger artistic direction or voice as a choreographer.” 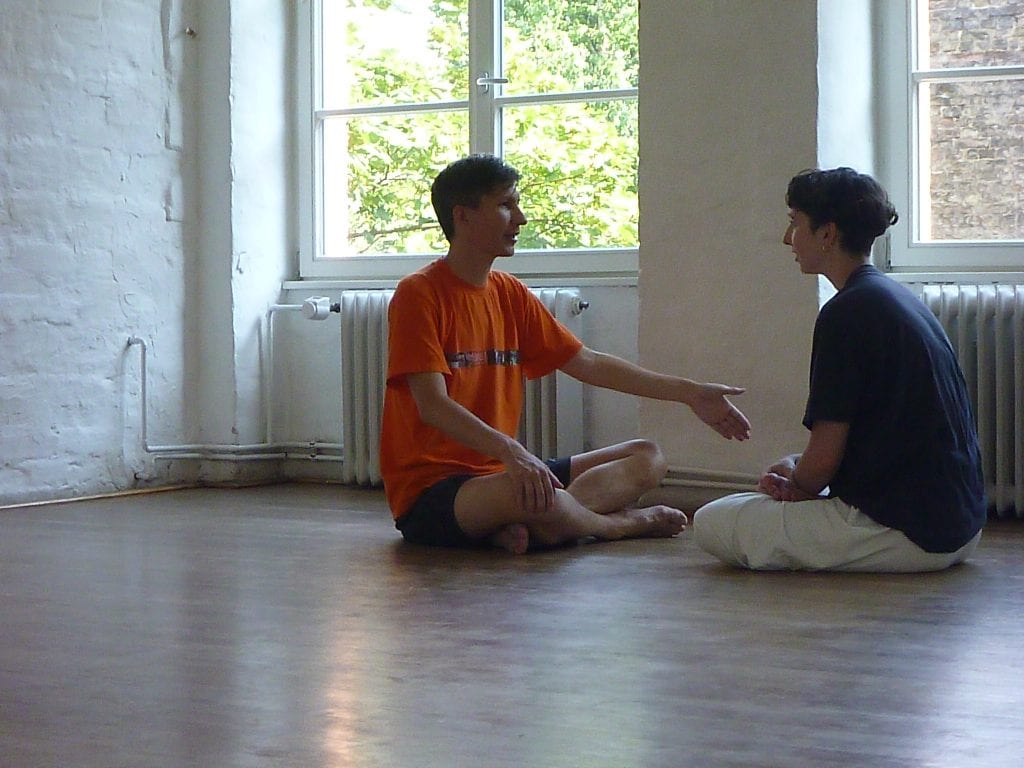 One of the dancers on the program is Hannah Francesca Troth, a third-year VCA Dance student.

“This is actually my first time in Europe,” she says. “It’s been a really big eye-opener. It feels like the dance industry here, and especially in Berlin, is much more supported and appreciated than it is in Australia. You are given space to delve into your practice genuinely with no boundaries.”

The Travelling Dance Studio program so far, she says, has been “hard” but also “really exciting and interesting”. 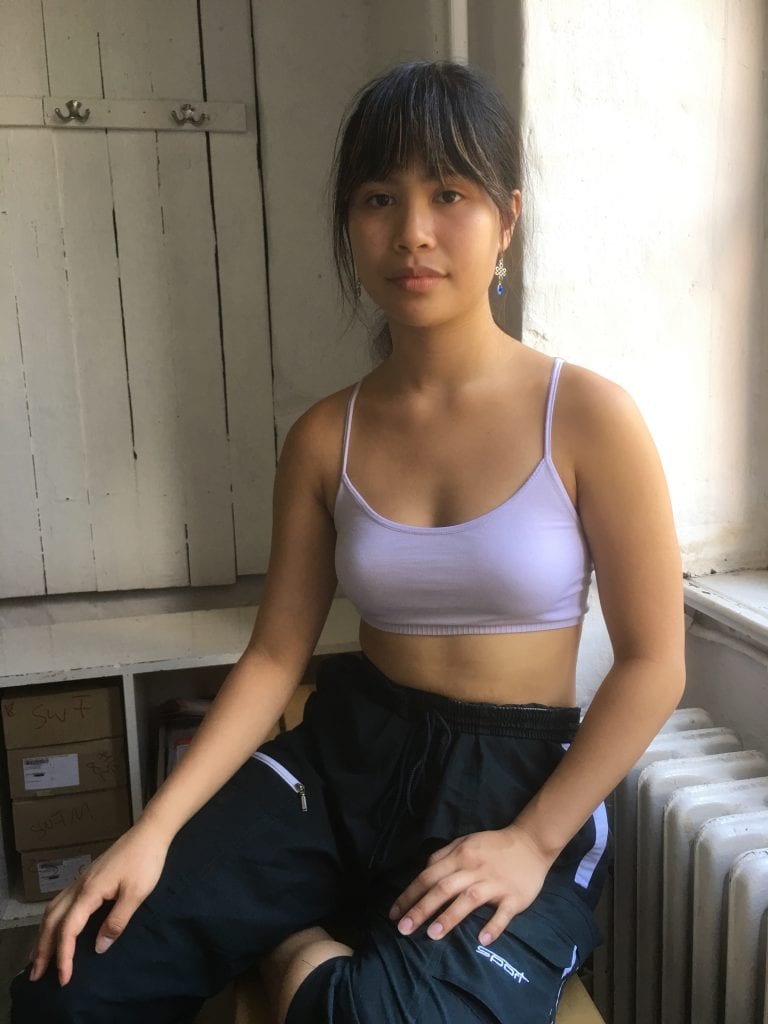 “I’ve been trying to make connections, which can sometimes be the most difficult thing,” she says. “Some people might think that if you get a degree you’ll get a job offer, but that’s not how it works – you have to be out there meeting people.”

Does she think the trip has given her any more insight to her professional direction in dance?

Troth nods, says, “For the past two and a half years I’ve been trying to work out whether or not I want to become a company dancer. I like a lot of physical work but choreography has traditionally been a weakness of mine. Being here has helped me to realise that I maybe need to challenge myself as a freelance choreographer and mix the conceptual with the physical to create something interesting.” 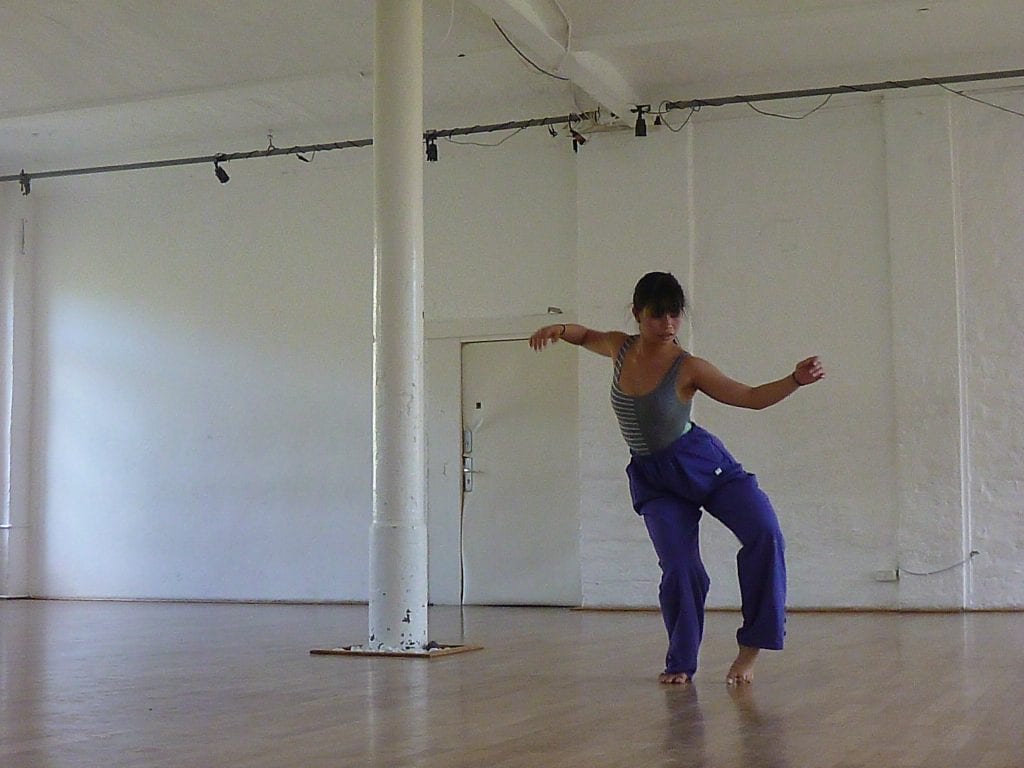 And might a return to Berlin or Paris be on the horizon?

She nods again, says, “I think I’ll definitely be moving to Berlin when I graduate”.

She’s not the only one to have been impacted that way. Second-year VCA Dance student Thalia Livingstone was born in Australia, grew up in Germany and returned to Australia during Year Ten to finish high school. Her training started in ballet before – more recently – encompassing contemporary dance.

“Yeah, I’m kind of past the time where I can do ballet,” she says. “I took a few years off from dancing to do a degree in architecture and only came back to dancing at the beginning of last year. I still really love ballet and all the technique it involves, but contemporary dance suits me too, and it also allows more room for research.” 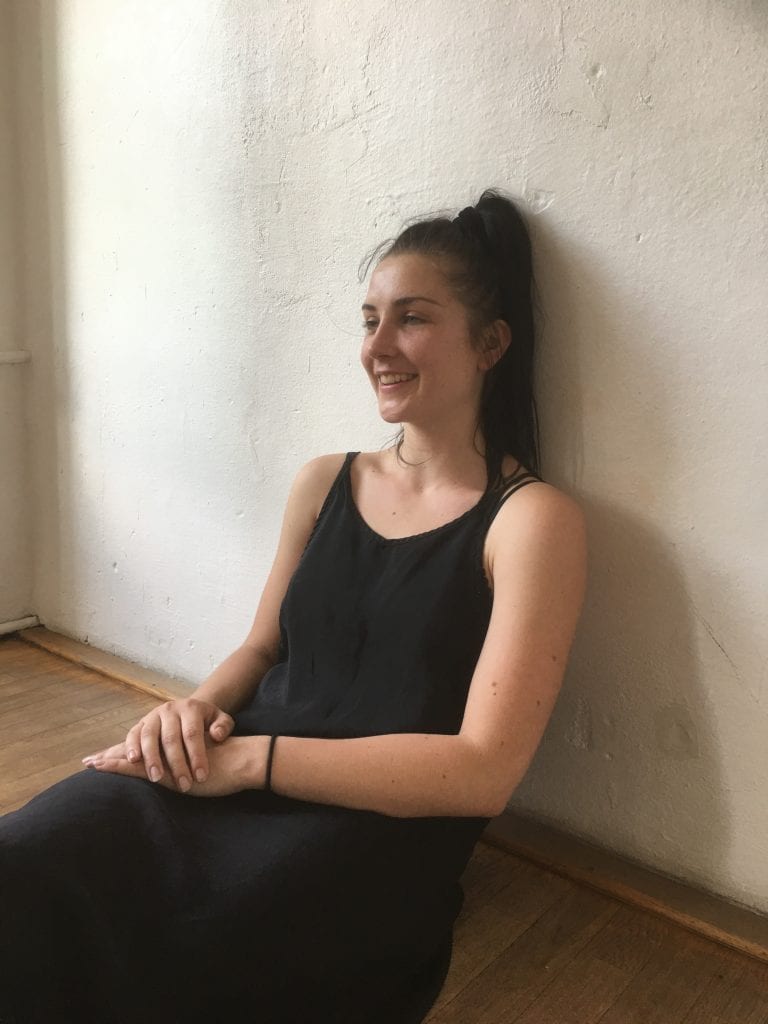 How has the Travelling Dance Studio been for her so far?

“I found the time we spent in France really enjoyable,” she says, “because we were mixed in with other dancers from around Europe and the US and Asia. I get a lot of information from just watching different ways of moving, different techniques, and it was incredible to have such a diverse selection of bodies to learn from.”

Seeing dancers from other schools perform during showcase events at the Centre National de la Danse, she says, was a real highlight. 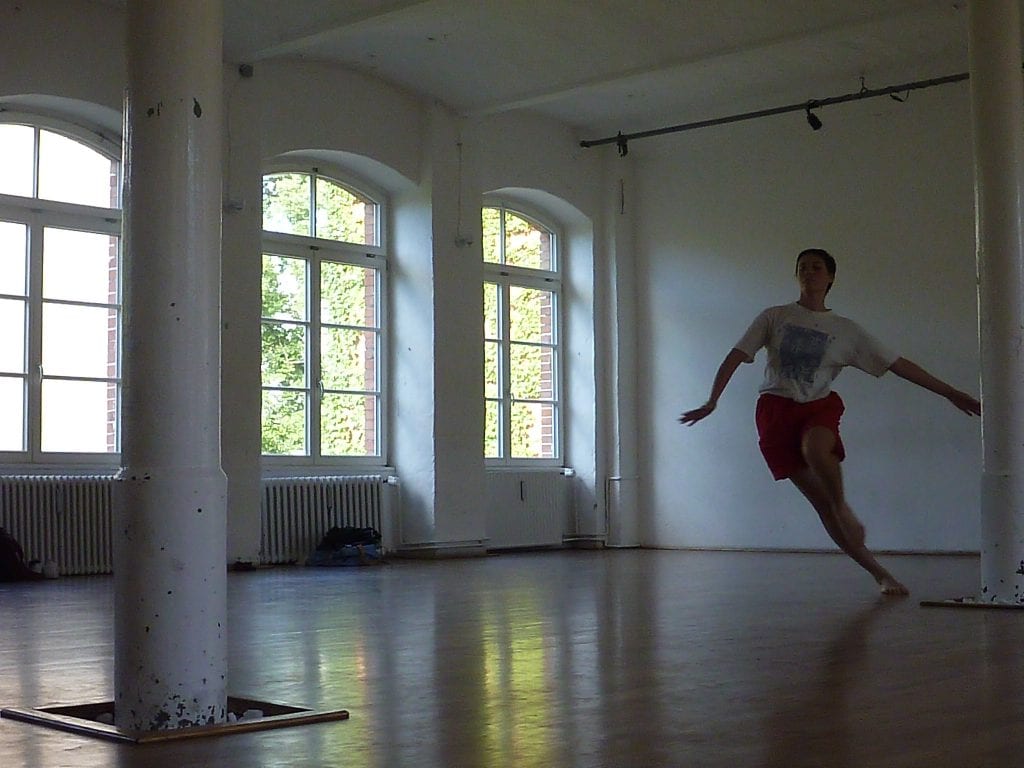 “I guess in Melbourne a lot of contemporary dancers have trained at the VCA and perform in Melbourne, and it can get a bit monogamous sometimes, so it’s really cool to see such a variety of different approaches.”

Like many emerging dancers, Livingstone would like to find full-time work in a dance company when she graduates – “I think you learn a lot more than you might doing project to project work” – and, like Troth, she has Europe in her sights.

“This is my first time back in Europe in four years and I didn’t realise until I got back here how much I’ve missed it,” she says. “I feel really comfortable here and think I’ll probably come back and try auditioning for companies once I’ve finished my degree.” 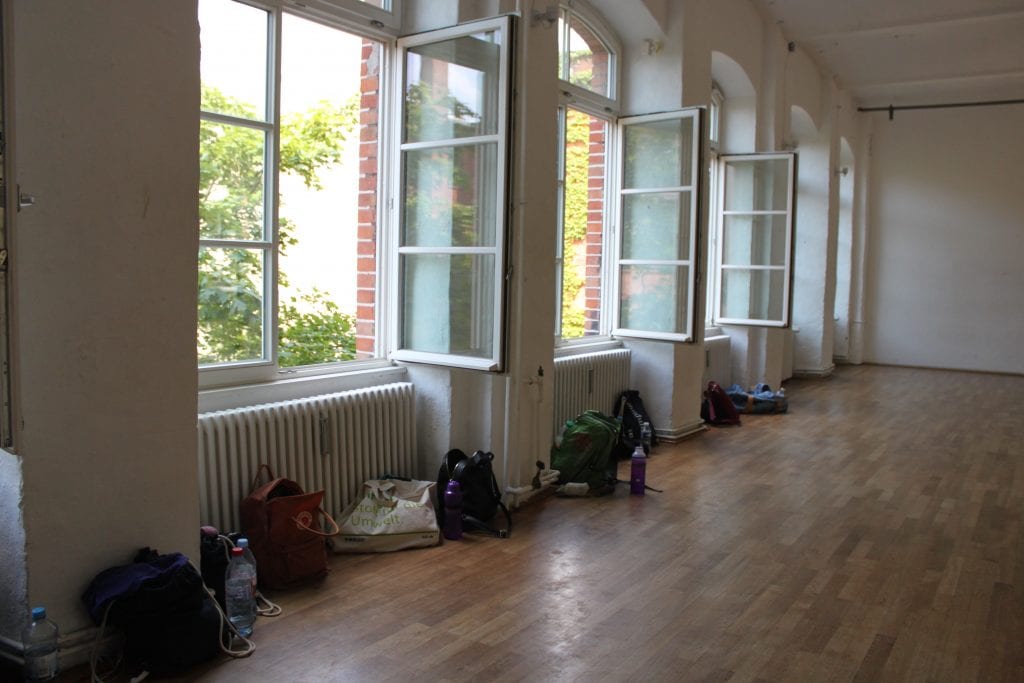 The travelling aspect goes both ways, of course. As part of this year’s Dance 40 celebrations, Harper will shortly travel to Melbourne to choreograph a major work with students.

When I catch up with him next, in the late afternoon, he’s breathing heavier than before, as are the students.

“You can definitely feel the dancers flagging by the end of  a trip like this,” he says. “There’s so much information to take in, so much exposure to new ideas and new cultures. And, of course, they’re coming from winter in Melbourne and it’s really hot here. But the benefits will last them a very long time.”

And with that, he claps his hands, smiles, and calls everyone back to the front of the room.