William Tell-all: behind the scenes of the epic Victorian Opera production

Victorian Opera’s latest production is set to be bigger than Ben Hur. Ahead of opening night on 14 July, we caught up with former Melbourne Conservatorium of Music student and William Tell cast member Jeremy Kleeman to find out more.

As told to Susanna Ling

This production of William Tell led by Richard Mills and Rodula Gaitanou marks the largest-scale undertaking in Victorian Opera’s 13-year history, with a cast of 11 principals, a massive chorus of 48, and a running time of over three hours. It’s also the first time in 140 years the opera has been performed in Australia.

What relevance does William Tell have for modern audiences?

Our director Rodula has updated the setting to a dystopian future reminiscent of recent book-to-screen hits The Hunger Games and The Handmaid’s Tale, making the production instantly accessible. But more than that, the themes of fighting for freedom and living under an oppressive regime are regrettably still seen all over the world today. In Australia we are lucky to still experience a large degree of freedom, but this opera brings the cost of that freedom to the fore.

Rehearsing under the leadership of Rodula has been incredible – to go with her intimate understanding of the piece, she has brought a great deal of warmth and compassion into the room, along with the ability to inspire and get the best from all of us.  There have been tears and hugs as the powerful final moments of the opera have overwhelmed us all.

Reuniting with old friends and colleagues has been really enjoyable too. Carlos E. Bárcenas (Arnold) and Tim Reynolds (Ruodi) went through the Master of Music (Opera Performance) program with me. Another Conservatorium alumna Alexandra Flood (Jemmy) has been a good friend for a long time but this is our first opera together.

Because of the large scale of the set, we rehearsed the production in a massive film studio – an epic space for an epic show, but not without its challenges, most notably the lack of heating. Film lighting normally caters for the warmth of such spaces!

You play the character of Walter Furst. Can you tell us about your character, and preparing for the role?

In the opera, Walter is a Swiss patriot, and friend and confidant of William Tell. While William assumes a leadership role as the cantons unite for the uprising, Walter is by his side, and in this production could be seen as an up-and-coming leader. Walter is more aggressive and impulsive than William but remains fiercely loyal to the cause.

In preparing for the role I spent time researching the historical context of 14th-century Switzerland, but I didn’t need to go out of my way to familiarise myself with the contemporary context as I’d already been watching The Handmaid’s Tale! 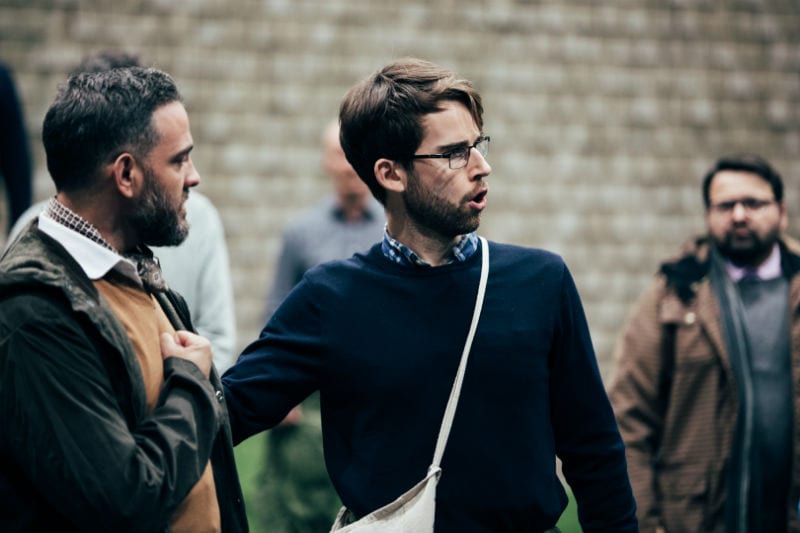 What have been the main challenges of preparing for William Tell?

This is the first opera I’ve performed in French, so I’ve put a lot of work into my diction and comprehension of the role. It was very valuable being surrounded by fluent speakers of French in the rehearsal room to help me with this process.

Another challenge I faced during the rehearsals was, unfortunately, the common cold – having just returned from performing another opera in Hobart I was struck down with a pretty nasty virus which made finding the energy and voice for rehearsals challenging. But I’m happy to report that heading into the performances I am now back to full health.

In performing the show, a challenge for me will be not being overawed by the space. The Palais Theatre is the largest theatre I’ve ever performed an opera in so it will be important to trust my vocal technique and the acoustics of the venue and sing within my limits.

Can you tell us about the costumes?

[Victorian College of the Arts alumna] Costume designer Esther Marie Hayes has cleverly combined a palette of contemporary clothes to create a distinct look for the Swiss, while giving the Austrian occupants an elegance and brutality with a more angular and tailored look.

You’ve been performing with Victorian Opera since you were just 17 – what’s that experience been like over the years?

Victorian Opera has been incredibly supportive of my development as an opera singer. My first production was the youth opera The Happy Prince in 2008. Richard Gill was conducting the production and invited me back to be part of several more workshops through the University of Melbourne, before I had the amazing opportunity to be in the inaugural intake of the Melbourne Conservatorium of Music’s Master of Music (Opera Performance) program in 2012. The next year, Richard Mills assumed the artistic leadership and along with dedicated creative staff at Victorian Opera has continued to support me as a young singer and actor.

What excites you most about performing in William Tell?

I’m most excited about feeding off the buzz and energy from the audience on opening night as they experience the theatre we’ve worked so hard together to create.

It will be a magical moment when the famous overture rings out on Saturday night and we take to the stage in front of an audience for the first time.